The United Nations (UN) has declared that access to a sustainable environment is a human right. But as established by IF supporter Alice Bordini-Staden, politicians must take action to ensure that future generations may enjoy this right. IF student intern, Hanna Burt, writes about the suggestions made by Alice and others to combat the intergenerational fairness issue that is climate change. 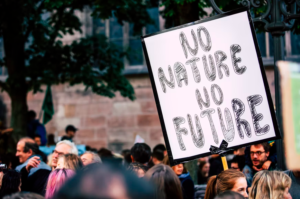 Alice Bordini-Staden recently represented IF in an online panel discussion hosted by the Institute and Faculty of Actuaries (IFoA). Alice was joined by Louise Pryor, IFoA President, Jane Davidson, former Cabinet Minister of Environment and Sustainability in Wales, and Kudzai Chigiji, Founder of Africans Thinking. Topics ranged from carbon taxation to impact investment, but most importantly the extent to which intergenerational fairness is being considered in climate policies.

As Alice herself eloquently put it in her introduction, “climate change is the quintessential example of intergenerational unfairness”. She pointed out that although generations living today have been the largest contributors to climate change, as well as the last generations able to mitigate the effects, little is being done to stop a continued global rise in temperatures.

In an interview conducted ahead of the panel discussion, Alice explained how instead of utilising the OECD principle of ensuring polluters pay for their own emissions, the world seems to have changed to demanding that “the grandchildren pay”. What is often overlooked is that the longer we wait before paying, the higher the price will be.

Climate is a human right

The importance of action is more apparent now than ever before. Earlier this month the UN Human Rights Council (UNHRC) declared that it is a human right to have access to a clean, healthy and sustainable environment. According to David Boyd,  UN Special Rapporteur on human rights and the environment, this new resolution is likely to have “life-changing potential in a world where the global environmental crisis causes more than nine million premature deaths every year“.

However, the resolution will not lead to any actual change unless it is properly translated into policy. Following the decision by the Human Rights Council, Michelle Bachelet, UN High Commissioner for Human Rights stated that “bold action is now required to ensure this resolution on the right to a healthy environment serves as a springboard to push for transformative economic, social and environmental policies that will protect people and nature”. To pass a resolution is one thing, whether or not politicians adhere to it another.

During the IFoA panel discussion, Jane Davidson recognised the gap between political rhetoric and action, and urged the general population to put pressure on the government. Alice Bordini-Staden gave a concrete example of an action the government could take when suggesting that they increase taxation on carbon.

This would indirectly create a personal carbon budget, Alice argued, and effectively lead to a decrease in emissions. Kudzai Chigiji added that politicians should ensure that private capital investment in climate-friendly technology is financially sound. This, she claimed, will incentivise the market to offset their carbon emissions.

The suggestions by each of the three speakers has potential to create a real difference. But most importantly, the climate crisis requires solidarity between generations. We all know that action is needed. It is up to us to leave behind a planet with the same resources previous generations have enjoyed. In the words of Kudzai Chigiji, “we inherited a world that is not fair. Let’s make sure we do not do the same to future generations”.