Throughout the pandemic crisis, younger generations have taken a large hit to their quality of life in order to protect older generations who are most at risk of dying from COVID–19. IF senior researcher, Melissa Bui, explains how older generations can repay young people for their demonstration of intergenerational solidarity by taking essential and urgent actions on addressing an even bigger crisis around the corner: climate change 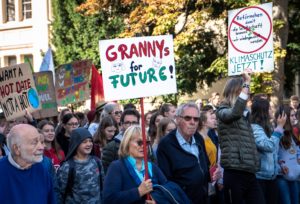 The COVID-19 crisis has brought about perhaps one of the most memorable examples of intergenerational solidarity in recent history. Young workers and students have had to accept disproportionate disruptions to their schooling, income and mental health in order to protect the lives of mostly older generations who are at a higher risk of dying with the virus. With the exception of Indonesia, older generations have also been prioritised within the rollout of the vaccination programmes. Young people will therefore be amongst the last to enjoy the increasing number of freedoms associated with being fully vaccinated.

Whilst the pandemic crisis is certainly far from being over, it is important that this sense of intergenerational solidarity is not lost when it comes to dealing with the other crisis on the agenda: the climate crisis. Although global emissions dropped by almost 6% in 2020 as a result of the reduction in demand for oil and coal, the International Energy Agency projects that this progress will almost be offset in 2021.

Younger and future generations of course will be most impacted by climate change. Committing to strong climate action is one of the many essential ways in which we need to repay younger generations for their solidarity throughout the crisis.

Stimulus packages are winding back progress

Whether we will achieve the “green recovery” that experts and campaigners have consistently been calling for depends a lot on how money is invested in the process of recovery. Over the years, public investments in renewable energies have contributed to the gradual decline in the cost of renewables relative to the cost of fossil fuels.

This trend has continued throughout the pandemic crisis. According to a report by the International Renewable Energy Agency (IRENA), approximately 62% of renewable energy generation had lower costs than the cheapest source of new fossil fuels in 2020, which has contributed to the 85% drop in the cost of large-scale solar power and 56% drop in onshore wind costs since 2010.

Fossil fuels still on the rise

Despite the competitive price of renewable energy, however, use of fossil fuels is on the rise again with emissions set to increase by 5% this year. Playing a key role in these projections are the stimulus packages that have been proposed by governments to aid recovery. Unfortunately, only 31% ($4.6 trillion) of the $15 trillion in stimulus packages proposed worldwide have been identified as “environmentally relevant”.

While populous countries like the USA, China and India have seemingly announced a number of “environmentally-friendly” measures, for instance China has introduced plans to increase solar and wind capacity which will match it roughly with the size of Europe’s entire electricity system, their efforts are still outweighed by the amount of money being used to prop up fossil fuel.

In the case of India and China, this is reflective of the fact that emerging economies are still heavily dependent on carbon-intensive industries. Countries such as Norway, Singapore, Mexico and Russia have announced very little to no green stimulus measures.

A failure of solidarity?

It has been reported that the average age of members of the lower house of Parliament (Lok Sahba) has been over 50 for approximately two decades and the average age of the upper house (Rajya Sabha) is 63 years old. Even in Norway, which has one of the youngest parliaments in the world, only 10 percent of MPs were under the age of 30 in 2018, while the 45 to 64 age group is overrepresented.

The reality is that we do not only need commitment to climate action from governments, but also businesses, investors and – importantly – older generations too. ESG investments have fared surprisingly well throughout the crisis in comparison to many fossil fuel investments which have contrastingly taken major hits. This has led to a rise in demand for businesses to disclose their exposure to climate risks given that ESG investments are proving to be much more resilient in times of crisis.

Over the years, there has also been an increase in pressure to shift pension funds towards green investment. The vast majority of populations are unaware of the enormous role that pension funds play on total emissions. In the UK, for instance, the average pension pot is estimated to have a carbon footprint of 23 tonnes of CO2 emissions each year, which would take approximately 19 years of recycling or the planting of 30 acres of forest to offset.

The proportion of people wanting their pensions to be used to help tackle climate change is rising and most have demonstrated a desire to “go green” with their pension investments.

However, greenwashing is a key obstacle stopping many from getting started, with around 40% of websites containing information regarding a corporation’s environmental impact which misleads their consumers.

A number of solutions, such as assigning a body to advise on greenwashing and green investments, such as the global watchdog, the International Organization of Securities Commissions, could be a positive step towards unlocking the trillions of dollars, which could be redirected towards helping build a better environment for younger and future generations instead.

There is no time to waste.