Antarctica is often thought of as an unblemished wilderness – but humans no longer need a physical presence to impair the natural environment. IF Research Intern Anthony J. Piwowarski explores the global consequences of a melting Antarctic ice sheet – and how some states may seek to profit from the climate’s instability. 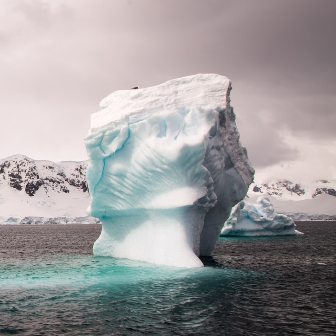 “If something goes wrong, you are a very, very long way from help.” Joanne Johnson is well acquainted with this sense of peril. A geologist at the British Antarctic Survey, Johnson and a fellow researcher camped in Western Antarctica for eight weeks this year to study the Thwaites Glacier. The team braced temperatures that can hit -40°C in winter, holding out more than 1,000 miles from the nearest research base to assess the impacts of climate change on the West Antarctic Ice Sheet.

The possibilities are stark: Antarctica holds enough water to raise global sea levels by 60 metres. Some 3 million years ago during the Pliocene era – the last time CO2 concentrations were as high as they are today – the West Antarctic Ice Sheet did not exist, and the sea level was 10–30m higher than it is now. This not only reinforces the threat posed by warming in the Antarctic; it also suggests that Antarctic ice is sensitive to global rises in temperature.

Yet the pace of change is harder to gauge. At the moment, Antarctic melting contributes 1mm per year to rising sea levels. Yet whilst most of Antarctica’s ice cap is far away from the warming seas, glaciers remain vulnerable. Glaciers are buoyed by the sea at a “grounding line”, the point at which the glacier is detached from the continental shelf and becomes a floating ice shelf. This gap acts as a funnel for deep water currents which can heat the ice shelf, causing the grounding line to recede and expose more ice to the water’s warmth.

Furthermore, Antarctic geologists believe that the Thwaites Glacier, dubbed the “Doomsday Glacier” for its prophetic properties, acts as a “keystone” which, if dislodged, could destabilise surrounding glaciers and accelerate the retreat of the ice sheet.

When not contemplating existential threats, it is hard not to be struck by the Antarctic’s sheer beauty. “It’s one of the most stunning and brooding places I’ve been to,” says Kelly Hogan, a marine geologist and geophysicist at the British Antarctic Survey; 98% of Antarctica’s land is covered in ice up to 4.8km thick, its shimmering surface enveloping the continent in an otherworldly glow.

Research in Antarctica has been likened to working on the moon. Indeed, the European Space Agency has sent test subjects to the Concordia Station on the East Atlantic Plateau to replicate the conditions one might experience on a mission to Mars.

The Antarctic Treaty aims to protect the Antarctic’s natural environment. A total of 54 states are party to the treaty, with 29 possessing consultative (voting) status, including the UK, US, Russia and China. The treaty is based entirely on consensus, with every consultative country possessing veto power. This has not necessarily led to gridlock: signatories outlawed nuclear testing in Antarctica and suspended claims to territorial sovereignty. The Madrid Protocol to the 1959 treaty, implemented in 1991, further banned prospecting for minerals in a victory for multilateral cooperation.

So far, the treaty has successfully isolated Antarctica from intense human activity and preserved it for scientific research, championing what Tim Stephens, Professor of International Law at the University of Sydney, calls the “romantic environmentalism of wilderness”.

Professor Stephens’ words aim to expose naivety. However evocative these images of an untamed Antarctic may be, they obscure a crucial point about humanity’s relationship to its natural environment. Climate scientists increasingly refer to an “Anthropocene”, a new geological era in which human activity has a direct impact on an increasingly changeable natural environment. As John Dryzek, Richard Norgaard and David Schlosberg put it (in their 2013 book Climate-Challenged Society), “In the Anthropocene, the very idea of environmental preservation is compromised, as everything we call wilderness is affected by human actions – even if no human physically enters it.” This represents a paradigm shift: where once human activity was the cause of environmental degradation, human inactivity can now have similarly grave consequences.

In the Anthropocene, no continent is an island. The Antarctic Treaty’s restraint by consent, whilst laudably successful in an age of Cold-War nuclearisation, fails to price in the global consequences of climate inaction. For example, the Southern Ocean surrounding Antarctica is a crucial fishing breeding ground as resources in other seas are drained: depleting it could damage ecosystems across the planet. Yet Norway, China and Russia repeatedly delay the creation of new marine protected areas.

Fighting over the spoils

International policy-making has not, however, been quiescent. In fact, states increasingly approach Antarctica with a perverse sense of long-term potential. Countries like the UK and Norway have shelved but not forsaken sovereignty, situating research bases in areas once claimed as their own. The US owns a base conveniently straddling the borders of every potential territory, whilst Russia reserves a right to plant a flag should it so desire. China and Chile maintain a permanent army presence, whilst India and Pakistan have also approved the expansion of their Antarctic activities.

Territorial posturing could bring great reward. Some predict that, beneath its melting ice, the Antarctic houses 200 billion barrels of oil, far more than found in Kuwait or Abu Dhabi. Antarctica is also the world’s largest store of freshwater, a covetable supply in an increasingly parched world.

When the Madrid protocol banning mineral prospecting expires in 2048, countries want to be in position. Other treaty provisions may be subverted sooner; in 2018, China began building its fifth research base before its environmental impact assessment was complete, in violation of the treaty.

Countries have not simply accepted the instability of the Antarctic’s natural environment; many seek to capitalise on the damage wrought by climate change, well aware that a receding ice sheet eases access to Antarctica’s precious resources.  The Antarctic Treaty’s romantic preservative spirit could be carefully circumvented, and it lacks the ability to call out those who flout the letter of its provisions. Without teeth, it may fade into a mere façade, devoid of substance.

The problem is not a myopic focus on the short term, but a governmental apparatus that remains stuck in the rivalries of a bygone era. It seems global powers are more primed for raising flags, appending territories, and manipulating treaties – skillsets undoubtedly more suited to the Cold War era – than collaborating in the face of a new threat. The Antarctic Treaty remains the next-best solution in a world where such state behaviour is a political constant.

Meanwhile, the scientists that occupy these strategically placed research bases will continue to sound warning bells. The words of David Vaughan, Director of Science at the British Antarctic Survey, ring forebodingly: “it is about one morning you wake up, and an area that has never been flooded in history is flooded.”