Hikari Hida, a recent graduate in political science and Asian studies at Temple University, Japan, began her first job at The NY Times in April in the midst of the COVID-19 crisis. Although many young people in Japan have been negatively affected by the COVID-19 crisis, she takes heart in a new spirit of activism that has come out of it. 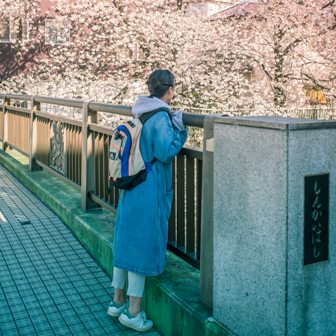 March in Japan – the time when the hanami (cherry blossom viewing) season is at its height. Families, friends, and couples across the country gather to sit under the famous pink blossoms, day-drinking sake, laughing together, and enjoying the slowly warming spring weather.

This yearly festivity provides a welcome reprieve from the strict tatemae (what one displays in public as opposed to their true feelings) that they must uphold in their normal day to day interactions. Due to this year’s worldwide coronavirus pandemic, we might imagine things to be different. We would be incorrect. Domestic and international media outlets alike shared photographs of cherry blossom viewers in huge crowds, no different from any other year, some wearing masks and some not.

When looking at these pictures, it was hard to believe that these people could be aware of the tens of thousands of people around the world that were losing their jobs and dying due to the very pandemic that threatened them, too.

Good fortune – for some

In Japan, the rate of the spread of coronavirus has been something of a mystery. Counts are much lower than in other countries with similar populations, something many suspect is due to the extremely low levels of testing.

The unemployment rate is 2.6% – up a mere two-tenths of a percentage point since February. While this doesn’t mean that Japan’s economy has made it successfully through a corona-induced recession, at this point in time it would appear that the situation here seems better than it has been for other large economies around the world.

Although Japan has seen a low layoff rate compared to other countries, the situation has caused companies to be more conservative in the hiring of new employees, crushing the aspirations for young people looking to make their way into the adult world. I have been extremely fortunate. As a relatively fresh college graduate who has dabbled in internships here and there after finishing my degree, I landed a job in April – right in the midst of the pandemic. But I cannot say the same for many of my peers.

Foreign companies in Japan have conducted harsh layoffs of new graduates who had secured their jobs months in advance while they were still students, and some Japanese companies have put their new employees on furlough, or have otherwise implemented temporary pay cuts with no end in sight. Friends in the service industries have no choice but to work: they cannot afford to stay home during Tokyo’s soft lockdown.

Despite the ways in which the world seems against them, I see the ways that young people have channelled their creativity, ingenuity, and frustration into beautiful and complex actions and activism that I believe will remain long after this pandemic is solved. As anger and distrust grow towards the men in politics, who all look the same and act the same as their many generations of predecessors, young people have taken a stand against hopelessness to voice their discontent on social media.

Political participation in Japan is notably and notoriously low. Politics still aren’t a welcome dinner table discussion topic in most households and classrooms. It breaks my heart to know that some people living in countries like Japan, where we have the power to make our voices heard in politics through democratic processes, take it for granted and choose not to participate.

It comes from a place of extreme privilege to expect democracy to be a norm that requires no protection, where in other places around the world, people are actively fighting and dying to have such rights. Becoming complacent about democracy is dangerous, but right now the feeling around me is that, due to the coronavirus itself as well as the government response (or lack thereof), light has been shed on the ways in which the government in Japan has fallen short of serving the people.

So, I have watched with awe and excitement how those very same young graduates and students who have suffered from layoffs, furloughs, and a lack of hiring are using the time and resources allotted to them to take action.

In response to global calls to end police violence and end racism, cities around Japan have begun to have their own marches for racial equality. On 14 June some 3,500 people came together for a Black Lives Matter march in Tokyo in solidarity with those protesting in the US as well as to hopefully pave the way for conversations about racism in Japan.

This effort was spearheaded and organised by a small group of mostly foreign, university students. Furthermore, with the Tokyo governor’s election coming up on 5 July, I have watched young people take to social media to share infographics they have created and resources they have gathered on the candidates to help create a level of political literacy amongst their peers.

The coronavirus has changed how we live in so many ways. It has dramatically affected how we learn, how we work, and how we socialise – and whether or not we will ever return to a perceived normal hangs in the balance.

Our power in a changed world

For fresh graduates beginning their shuukatsu (job hunting), the future looks pretty bleak. For those working from home, there is no way of knowing when they will be able to return to the office. For the elderly, they have missed their families, who must stay away to avoid infecting their most vulnerable loved ones.

Even our ways of remembering and honouring history have been affected, as for the first time since the end of WWII, there will be no proper ceremony honouring the victims of the atomic bombings.

I find myself fearing what history we may forget, or what has already been forgotten. There is no denying the coronavirus has changed life across the globe irreversibly. It is the extent to which this change will go that remains amorphous and unknown.

So, as we have begun to, we must keep acting. We must keep thinking, and learning, and sharing. We must hold our leaders accountable and strive to solve the problems that have for decades escaped society’s consciousness. In times like these, we must all do our best to remember that we are the ones with the power to shape history and determine the kind of future we want.