Family life in the UK is becoming more expensive, writes IF researcher Holly Metcalf, with more children growing up in poverty, and their parents increasingly making sacrifices to try and protect their children’s wellbeing. With government support in many areas being cut, families have had to resort to different coping mechanisms, which pose problems in terms of both sustainability and fairness 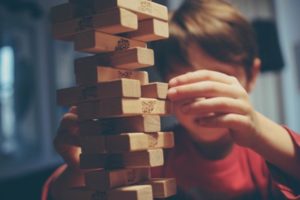 Since 2012, the Child Poverty Action Group (CPAG), in collaboration with the Joseph Rowntree Foundation, have monitored the cost of bringing up a child in the UK. Their latest report, published in August, revealed that in the last six years the full cost of bringing up a child, from birth to age 18, has risen by over £8,000 for a two-parent family, and over £25,000 for a lone parent.

This is quite high relative to the median disposable income of a UK household of £27,200. These costs have been driven by a combination of factors: inflation and rising housing costs, alongside government spending cuts. Particular drivers are policies such as the benefit cap, cuts to housing benefit, and the “two child limit”, which, for children born after April 2017, allows families to claim benefits for only their first two children.

Childcare is one of the most significant components of the cost of raising a child, so the introduction in the last year of a government policy of 30 hours free childcare per week has slightly eased the pressures on families with children. However, not all parents have been able to access this, and it does not apply to children under three, so for those parents who need to return to work before their child reaches the age of three, the burden of childcare costs remains particularly severe.

The risk of poverty

These rising costs, combined with reduced government support, presents challenges for all families, but particularly for those on lower incomes. In 2018 the number of children growing up in relative poverty (defined as in a household earning less than 60% of the median income) has risen to the greatest number in a decade. The CPAG report shows that a family with both parents working full time on the national living wage will still be £49 per week short of the Minimum Income Standard – defined as what the public think of as the income necessary to afford a minimum decent standard of living. For lone parents the situation is more difficult – a lone parent on the living wage falls £74 short of the minimum standard of living. This is especially concerning given that “making work pay” is a cornerstone of the goal of the government’s anti-poverty strategy. The ongoing implementation of Universal Credit is aimed at ensuring that the benefit system incentivises people to find work, yet some parents are unable to provide for their children, despite working full time.

Rising rates of child poverty is a key intergenerational issue, affecting not only the life chances of children, but also the quality of life of their parents. There is a significant body of research linking child poverty to worse educational and health outcomes, as well as worse outcomes later in life. For example, children who grew up in poverty in the 1980s have been found to be four times as likely to be living in poverty in their early 30s. Parents also suffer, often making significant sacrifices to try and protect their children from some of the worst effects of low income. Recent news stories on holiday hunger in the UK have explored how many parents struggle to cover the costs of food during the school holidays, when their children no longer receive free school meals. Research undertaken by YouGov for the foodbank charity the Trussell Trust has found that almost 1 in 5 parents surveyed reported being likely to skip a meal to feed their children.

Even for parents who are not living in poverty, the cost of raising children can entail significant financial sacrifices. The growing importance of the “Bank of Mum and Dad” has seen parents shelling out to help their children with the costs of university or housing. Equity release lending, a process by which people can borrow against the value of their house, reached a record high in the second quarter of 2018. This poses significant issues of both sustainability and fairness. If parents are increasingly using their wealth to support their children, they may be less able to save for retirement and old age. And if children increasingly need financial support from their parents to get through university and pay for a home, then this threatens social mobility, and the life chances of those who do not have wealthy parents to support them.

Photo by Michał Parzuchowski on Unsplash