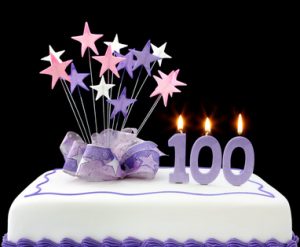 Most people in the UK know that if you are fortunate enough to reach your 100th birthday, the Queen sends you her congratulations for reaching such an impressive milestone. A fact that fewer people are probably aware of is that if you manage to reach your 105th birthday then the Queen sends you another message, and then you get another one for each additional birthday that you live long enough to celebrate after that.

It seems that the Queen may have been finding the responsibility of sending these messages has become rather more onerous over recent years, at least if the latest official population estimates from the Office for National Statistics (ONS) are to be believed…

One of the manifestations of the UK’s ageing population is that there are now more people aged 90 and over than ever before. According to the ONS, the UK currently has over half a million residents (556,270) aged 90 and over, up from 194,670 in 1985. There are an estimated 14,570 centenarians (people aged 100 or over): their numbers have quadrupled since 1985. The increase in centenarians has been especially stark over the last decade, during which their numbers have risen by 5,720 (a 65% increase).

Within the centenarian population, the number aged 105 and over has increased markedly in recent years, reaching 850 in 2015 compared to just 130 in 1985; so presumably the Queen finds that sending letters to them occupies approximately seven times as long as it did thirty years ago.

In reality, this task is done by the Department of Work and Pensions’ “Centenarian Team”: and in September 2014 the DWP reported that the team had “now expanded from a single person to a team of 7 to provide a better service as the number of people over 100 increases.”

One of the defining characteristics of the “oldest old” as a population is their extremely skewed gender ratio. As you would expect, there are currently around 100 men of working age for every 100 working-age women; however, the sex ratio becomes increasingly biased at older ages because life expectancy among males remains lower than it is among females. The ONS data show that for every 100 men aged 90 and over in 2015 there were 240 women (or 70% of the over-90s are female, to put it another way).

However, men are currently enjoying more rapid gains in average life expectancy than women are, partly because the overall increase in life expectancy is largely being driven at the moment by reductions in two health problems which have a bigger effect on men: smoking and cardiovascular disease. Eventually, you would expect the sex ratio to become more even as more men begin living into extreme old age.

These figures raise a few intriguing questions about the challenges of rising longevity. A pair of economics professors, Lynda Gratton and Andrew Scott, have recently published a new book, The 100-Year Life: Living and working in an age of longevity, which argues that society is ill-prepared for the fact that a very large proportion of today’s young adults (perhaps over 25%, according to some estimates) will live long enough to enjoy their 100th birthday. They estimate in their book that the difference between living to the age of 70 and living to 100 grants an individual approximately 100,000 additional hours of productive life. The big challenge – for both the individual and broader society – is to enable them to live those additional hours in good health and material comfort, and to help them be as productive as possible.