Jessica K. Taft is Professor of Latin American and Latino Studies at the University of California, Santa Cruz, and is the author of The Kids Are in Charge. In this blog for the Intergenerational Foundation’s Worldwide Blog Week, she explores what adults can learn from young people, specifically the community of working children in Peru. 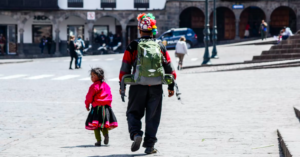 Young people at the forefront

Young activists from around the world are confronting major social, political, and ecological problems. They are at the forefront of vibrant movements struggling for climate justice, human rights, democracy, and a more inclusive, equitable, and peaceful world. Young people are skilled, effective, and highly capable organizers and leaders, but they should not have to fight these fights on their own.

Through social media, interviews with journalists, and public speeches, many young activists have expressed their frustration with adults who effusively praise their activism but don’t do anything to address the issues that young people are raising. They want and expect more from the adults around them: they want adults to really listen to them, to discuss their ideas, to debate tactics and strategy with them, and then to act alongside them to advance their political visions. They want adults to join them as partners in their struggles.

This was the question that led me to the Peruvian movement of working children – a social movement that has been doing collaborative intergenerational activism for over forty years. Made up of multiple organizations, the movement involves thousands of children between the ages of 8 and 17. Most of the children work in the informal economy, helping out in small family businesses and agriculture, and nearly all of them are also in school.

They come together in local, national, and regional groups to discuss how to support each other, improve working children’s lives, and create a more just and equitable world for all children.  They are supported in their organizing by a few hundred adult allies, called colaboradores, and we can learn a lot from their approach.

The first step in learning how to be in partnership with youth activists is actually an un-learning. If we want to work together as equals, we, adults, have to unlearn some of our negative assumptions about young people. We live in a society that is ageist, where we think that kids are generally less capable of political analysis and action than adults and that they should follow our lead. We have this assumption not because we are bad people, but because we are constantly bombarded with messages that tell us that adults know best and that it is our job to educate kids, not the other way around.

But young people live in the world, they are not separate from it, and this means that they understand a lot about the world’s issues and problems. The kids in the Peruvian movement of working children are all experts on child labor and they know, from direct experience, that the current approaches to this issue don’t actually help them.

If we want to improve young people’s lives (whether in schools, neighborhoods, or the larger world), adults need to really listen to what kids have to say about the problems they face and how they think we can best address them.

In the movement of working children, adults and kids see everyone as both a learner and a teacher. They know that we can all learn from each other about major social and political issues, and that we all need to learn new skills in order to do effective intergenerational activism.

No one is born knowing how to write a press release, how to organize a march, or how to plan a public assembly. The skills of activism are skills that have to be learned, and it turns out, kids are just as able to learn these skills as adults.

We also need to learn new ways of interacting and communicating with one another across generations, practicing a more horizontal form of intergenerational relationships where power and decision-making is shared.

Adults have particular material and social resources that are often harder for young people to access. This means one of our roles in our partnerships with young activists is to offer these resources. This can include financial support, introducing youth to key decision-makers or influential members of our communities, giving them rides, cooking meals, or offering up our conference rooms, living rooms, or classrooms for meetings.

We also sometimes have positions that can allow us to provide institutional memory and continuity. Young people move through institutions, especially schools, very quickly and so adults can be key to understanding what previous cohorts have done and how institutions have responded in the past.

Stepping into the challenge

In the Peruvian movement of working children, adults create a supportive organizational context, teach kids new skills, and talk seriously with them about complex and difficult topics. They have learned to respect kids as their equals, to value kids’ knowledge, and to follow kids’ leadership. This isn’t easy and there are times when adults over-step or talk too much. Unlearning adultism is hard work. It takes patience and practice, but it is worth the effort.

Young people want and need a more sustainable, equitable, and just world. And they know that the only way we are going to create that world is if we work together, across generations, as equal partners.