The safety of future generations is under threat. Research at Imperial College London shows that generations born today will be far more affected by extreme weather than their predecessors. IF student intern Hanna Gunnerhed Burt writes about how these conditions will unfairly affect future generations 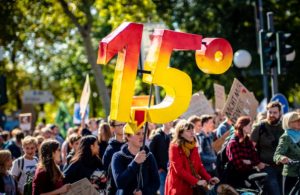 A recent study published by Science shows that children born in the 21st century will experience disproportionate increases in weather-related natural disasters compared to other generations.

Not only will these extreme events be more frequent and intense, they will also increase in duration and cover a larger geographical area. Consequences are manifold, including but not limited to food shortages, habitat loss, decreased life expectancy and economic difficulties.

As state leaders around the world prepare for COP26, the UN Climate Change Conference which will be held in Glasgow in November, the findings of this study become especially important.

The authors suggest that if states change their current climate policies so that they align with the goals set out in the Paris Agreement, they will drastically decrease the risk of weather-related natural disasters. The possibility of heatwaves, for example, would be reduced by 40%, and the risk of cyclones would decrease by 29%.

It will however require global temperatures to rise by no more than 1.5°C above pre-industrial temperatures, half of the 3 °C increase predicted by the UN if climate policies remain unchanged.  The success of the Glasgow conference in setting concrete plans to deliver Paris Agreement targets will therefore not only be vital in reducing the negative effects of climate change in the near future: it will also play a monumental role in deciding the future of our children.

Dr Joeri Rogelj, researcher at Imperial College London and one of the co-authors of the study, sees global warming as an issue of intergenerational fairness. He acknowledges that the study lays “…bare the fundamental injustice of climate change across generations, as well as the responsibilities of today’s adults and elders in power”

Further, he recognises that “the consequence of children suffering unprecedented sequences of climate extremes over the course of their lives can now be attributed to the inaction of today’s adults”. Future generations are therefore entirely dependent on current generations to tackle the climate emergency.

The UK government is presently committed to reducing greenhouse gas emissions by 68% by 2030, and 80% by 2050. However, an investigation by the Public Accounts Committee shows that the UK will not succeed in reaching these targets unless drastic changes are made to the way we live our lives. Further, even if these goals are met, they would still not be enough to meet the goals of the Paris Agreement.

IF is therefore calling for MPs to commit to strong climate action. It is our collective responsibility as the current inhabitants of this planet to ensure future generations may enjoy life on Earth as we do. If the correct steps are taken, we will be able to reduce greenhouse gas emissions, thus ensuring that the global temperature does not rise by more than 1.5 °C. This would mean that children who are born today are able to grow up in a safe environment, in a world less troubled by the constant threat of natural disaster.

Young people around the world are calling for action, and it is time they are heard. From taking part in the Fridays for Future movement, to going so far as to sue their governments for infringement upon their human rights, it is clear that the youth of today both want and feel the need to combat climate change. It is time for world leaders to take a leaf out of their books, to begin thinking long-term, and to take action in order to hinder irreversible devastation to our planet.

Action is needed, and it is needed now.