Severe floods have devastated millions of households in the central region of Vietnam over the past month. As expected, this has triggered investigations into how much of this disaster can be attributed to climate change. IF researcher Melissa Bui explains why these types of studies are not necessarily having the effect we might hope for 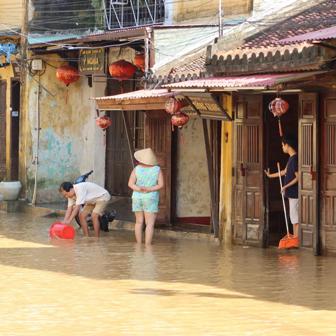 Over the past month, millions of households in Vietnam have been forced to adapt to what looks like a new normal of extreme and calamitous weather. Approximately 1.5 million people have been displaced from their homes as the result of severe flooding in central Vietnam since the first – in what became a series of consecutive – storms and floods hit the provinces of Quang Nam and Quang Ngai in October. The Vietnamese government reported that 235 people have died or are missing.

Such extreme weather events typically intensify international concerns over global warming and debate over the extent to which human-induced climate change has a hand in causing such devastating disasters. World Weather Attribution (WWA), a leading collaborative and international project which was set up to investigate these links, is already well under way in its investigation of the recent floods in Vietnam. However, to what extent are these types of studies reliable, and taken into account in reality?

Although disasters are a common occurrence in the region during the monsoon season, the recent floods and landslides are the worst to have hit the country in two decades. Latest estimates suggest that over 720 houses have been destroyed and a further 176,790 seriously damaged so far, bringing the economic toll to a total of approximately VND17 trillion (£550 million pounds).

General media have often been quick to make a connection between extreme weather events and climate change. Due to low-lying land, Vietnam and other countries in South East Asia are commonly recognised as amongst the areas most vulnerable to rising sea levels.

There is already a scientific consensus that global warming is making several types of weather events more likely or more intense on average. Attempting to find connections between anthropogenic climate change and specific events, on the other hand, is still an evolving field of study. While scientists cannot yet attribute any single event to climate change, they can estimate the extent to which human-induced climate change made an event more probable.

The method used by climate scientists to investigate the role of global warming in the likelihood of a specific event is called Extreme Event Attribution (EEA). The basic premise behind the methodology involves comparing a scenario with climate change with one where it is assumed that climate change does not exist, which typically requires large amounts of historical data on weather patterns. This does not seem to be a problem in the case of the recent floods in Vietnam: researchers at World Weather Attribution are expected to release findings later this month.

The findings will be the latest addition to a line of investigations into the most extreme weather events in recent history. In some of these WWA studies, human-induced climate change has been attributed to a significant part of an event; for instance, the recent Siberian heat wave was almost impossible without climate change, according to the researchers.

How much of a difference does this make?

It is argued that these studies help to heighten the sense of urgency surrounding climate action on the international stage. Not only can they serve as a sobering reminder of the very real and growing human, economic and environmental consequences of global warming, but they also allow less space for speculation over whether these events should be dismissed as just another part of the earth’s natural cycle.

Experts have also highlighted the important role that event attribution studies can serve in climate litigation. These studies help to build a better understanding of what type of weather events are foreseeable, thus opening up opportunities to hold actors accountable for failing to adequately prevent, prepare for or adapt to expected climate risks.

However, at present it seems like these studies are not having quite the desired effect on many key stakeholders in international climate policy as one would hope. Earlier this year, academics from the University of Oxford and the University of Manchester conducted in-depth interviews with key actors in US climate change policy, including event attribution researchers, journalists and local and national policy-makers. They discovered that, because of large divergence in the results between studies investigating the recent drought in California, many stakeholders doubted the reliability of current scientific research, often falling back on pre-existing ideas to guide their perspective on climate change instead.

Other experts have raised concerns over the possibility that these studies will be used to justify the provision of compensation only to the extent that a connection with climate change can be identified, which is considered to be an unfair method for allocating responsibility. This is because while it is possible for climate change to be attributable to only a small part of an event, that small part may have played a key role in pushing a community beyond their capacity to resist damage.

These circumstances may well be much different in future as Extreme Event Attribution methods improve.