On Wednesday (25 November) UK Chancellor Rishi Sunak presented his “Spending Review 2020” (SR2020) to Parliament, setting out the government’s spending plans for the coming year. IF student intern Hugh Nicholl interprets the SR2020 from the perspective of younger and future generations, and shows why tentative steps towards reform to RPI, likewise announced on Wednesday, will also have some bearing 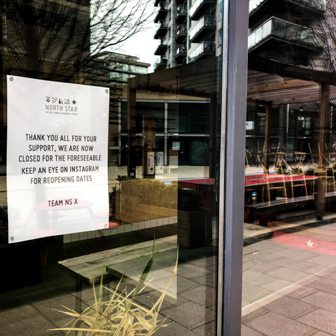 Wednesday’s Spending Review saw Chancellor Rishi Sunak unveil a spending plan that reflected caution in the face of dire economic forecasts on the one hand, and the continued surge in government spending to fuel the COVID-19 recovery on the other. Headline announcements included the expectedly alarming forecasts on unemployment and borrowing, a minimum wage rise, a pause to public sector pay rises with the exception of NHS workers and those earning below the median wage, a cut to overseas aid, and a new £4 billion infrastructure fund. But what does the Spending Review mean for young people, who are already in a position of particular economic vulnerability? And what do these high levels of spending imply for the younger and future generations who will be required to foot the bill?

The Chancellor’s statement claimed that the priority of the government was to protect the livelihoods and jobs of the many people deeply affected by COVID-19. Young people have suffered disproportionately as a result of this year’s economic catastrophe, and when the Chancellor said “we cannot protect every job” – pointing to the OBR’s expectation for unemployment to rise to 2.6 million next year – it was by implication the jobs of young people that will be most at risk over the coming years.

It is to be cautiously welcomed, then, that the government appreciates the importance of protecting jobs and of encouraging investment at this moment. The Chancellor announced £2.9 billion for a new, three-year Restart Programme, providing support for those looking for work. Given the detrimental impact of COVID-19 on youth employment in particular – for example, between March and September 2020 there was a 125% increase in the number of people aged 18–24 claiming unemployment related benefits – job creation schemes have the potential to provide much-needed support for young people. Also included in the Spending Review was £1.6 billion for the Kickstart scheme, aimed at subsidising new jobs for young people at risk of long-term unemployment.

It is true that such commitments are no panacea: while boosting the quantity of jobs in the short term, employment schemes provide no guarantee of high-quality longer-term jobs that are secure and offer prospects for development and earnings growth. But the government’s job creation schemes are on balance a welcome intervention at a time when young people are in desperate need of support and improvements to their employment opportunities.

Alongside this support for jobs were significant commitments to infrastructure spending. The creation of a new National Infrastructure Bank was announced, for example, pumping billions of pounds into infrastructure projects. If, as the government claims, these projects really do provide further support for hundreds of thousands of jobs, it could be that young people are the largest beneficiaries.

Additionally, the extension of the National Living Wage to 23 year-olds – previously limited to those aged 25 and over – is a welcome, if only partial, step in addressing the financial insecurities of young people. Still, the previously proposed rise from £8.72 to £9.21 was replaced with a minor increase of just 2.2%, to £8.91. Among younger age groups the minimum wage rises were even smaller, ranging from 2.0% to just 1.5% for 16–17 year-olds.

The overall picture is one in which some young people look to benefit from the Chancellor’s announcements, but nevertheless others will slip through the gaps due to the shortcomings to government job schemes at a time in which young people are most in need of economic support.

With the exception of foreign aid and parts of public sector pay, proposals for how the government is going to pay for the enormous sums of money set out in the Spending Review were noticeably absent from the Chancellor’s statement. The question here is not so much whether the scale of government spending is justified: indeed, the unprecedented challenge posed by COVID-19 has fostered a near-consensus that such sums are needed. But with public borrowing reaching its highest levels in peacetime history – £394 billion this year – there is no doubt that future generations will face a mammoth task in tackling their fiscal inheritance. If the government is committed to borrowing so much money, then we need to acknowledge the major implications for intergenerational justice that deferring debt onto future generations entails.

There is also no guarantee that the cheap borrowing the government currently enjoys due to low interest rates will provide a sustainable pathway to servicing its debt down the line. It is true, as noted in the Spending Review, that historically low interest rates make high levels of government borrowing uniquely affordable at present. But given the huge levels of public debt, even the smallest fluctuations in interest rates can have large ramifications for the debt burden in the longer term. If interest rates begin to creep up in the future, then it will be future generations who will be expected to pay.

Reforming RPI – but not immediately

Wednesday also marked the publication of the government and UK Statistics Authority’s response to the joint consultation on Retail Prices Index (RPI) reform. As expected, the government announced a change in how it measures inflation, with RPI due to be reformed to bring the government’s inflation measure in line with the Consumer Prices Index including owner occupiers’ housing costs (CPIH). Despite some predictions that the proposed change could be implemented as soon as 2025, the response stated that it would not be practical to implement the proposal until 2030.

IF has argued against the use of RPI due to its impact on young people in two important areas: student debt and index-linked rent reviews. Among RPI’s other critics are the Office for National Statistics, who have described it as “a very poor measure of general inflation”. This move away from the existing measure of RPI – which systematically overstates inflation in a way that unfairly impacts younger generations – is long overdue, though the response would have been even more welcome if it had put forward a timeline for the reform’s implementation before the next decade.

It is no surprise that those with a vested interest in maintaining an inaccurate measure of inflation, such as pensioners and pension scheme managers, have already stated their resistance to the reform of RPI. But from younger generations’ perspective, more accurate forms of inflation tracking like CPIH will still protect against inflation, while addressing the intergenerationally unfair uprating that has taken place by using RPI.