When Jane Davidson was Minister for Environment, Sustainability and Housing in Wales from 2007 to 2011 she became a leading architect of the groundbreaking Well-being of Future Generations (Wales) Act (2015). In her new book, #Futuregen: Lessons from a Small Country, she tells the story and relays her vision. Our reviewer, IF Research Intern Hugo Till, is impressed 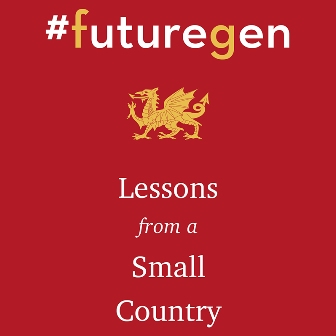 #futuregen is a book of many interwoven narratives. On one level, it is an account of how Wales became the first country to enshrine the rights of future generations into law, on another it tells the story of how the Welsh Assembly found its feet and asserted Wales’ place as a pioneer for environmental and social sustainability, and on another, it recounts a deeply personal tale of Jane Davidson’s own role in these events.

She offers us a timely reminder that for intergenerational justice, as with so many issues, “the political has always been personal and the personal, political.”

But the personal touches do not obscure the radical potential of the Well-being of Future Generations (Wales) Act. In a world where taking “long-term action” often means nothing more than setting distant targets and letting your successors sort it out, Wales’ example of placing legal obligations on all public bodies to “carry out sustainable development, including a requirement to set and publish ‘well-being objectives’, [and] to take ‘all reasonable steps’ to meet those objectives” stands in stark contrast.

The strength of the Act, Davidson explains, is that it goes beyond mere “tinkering around the edges”, but instead demands a complete reappraisal of how we perceive our world, and what we should value.

#futuregen argues that the climate and sustainability crises are really just symptoms of a broader “crisis of perception”, whereby “large institutions subscribe to the concepts of an outdated worldview, a perception of reality inadequate for dealing with our overpopulated, globally interconnected world.”

To this end, the well-being goals mandate a break with the paradigm of extractive capitalism and the “unicorn of unrestricted growth”, redefining prosperity as “low carbon, delivering within environmental limits and capable of generating decent work”.

Davidson is right to argue that such measures – which go beyond encouraging government and corporations to pursue their current goals more sustainably, and instead seek to redefine these goals and change the culture of our institutions – are now necessary across the globe to secure a future.

But despite Davidson locating the Act in a broader sustainability movement for global and systemic change, she also emphasises that part of the Act’s strength is how it attends the particular character of Wales and the strength of Welsh communities.

The act is not about tying the hands of democratically elected governments and surrendering power to faceless bureaucrats tasked with enforcing the regulation. Rather, it seeks to change the culture of government and its relationship with civil society, and to empower local communities to build the futures that their grandchildren will want.

Davidson recounts how the framework that the Act provides was instrumental to Skyline, “a community land-stewardship project to look at what would happen if the community were given back their surrounding land in perpetuity.”

It challenges the privatisation of nature whereby land “is managed by national and international corporations with little direct economic benefit to the local community” (and with very large environmental costs), and instead reasserts the stewardship of Welsh people over their surroundings, “reconnecting communities to a landscape so that it can provide income, jobs, a place of social and cultural activity and a better home for nature.”

But crucially, in each of the three valleys where Skyline was trialled, the process was steered by community leaders who emerged over the course of the projects. Thus each project began to reflect the particular “history, meaning and potential of each place”. This was the almost poetic wish list that arose from a public consultation with the people of Ynysowen in the Merthyr Valley:

The skyline is for looking at

The skyline is the Taff trail

There are magic mushrooms

I want round trees not pointed ones

Thus the project realises one of the central goals of the Act: to give local people the right to imagine their own futures. Whether the Act has the regulatory teeth to allow people to realise these futures remains to be seen, as Davidson admits.

Davidson reflects on the importance of “the right time and place for whole system change”, and the advantages of using a disruptive moment, which in Wales’ case was the birth of the Welsh Assembly.

Perhaps the massive disruption caused by COVID-19 provides a similar opportunity. As Davidson explains, “We know now that governments can act – and quickly – when faced with an emergency that they must address. We must next encourage them to respond similarly to the existential threats of climate change and nature degradation to current and future generations.”

Lord Bird’s Future Generations Bill, currently awaiting its second reading in the House of Lords, builds upon the momentum of the Welsh Act to “embed long-termism, prevention and the interests of future generations at the heart of UK policy making”. This UK-wide Bill has to opportunity to be even more ambitious than the Welsh Act, since it can take advantage of powers that are not devolved to regional government. In particular, it promises to hold not only government departments but large corporations to account for unsustainable practices.

In #futuregen, Jane Davidson tells a delicately personal story but with global ramifications. In a world where control over the future seems to be increasingly slipping from our grasp, it provides a bold vision for a better tomorrow as well as a strategic map for getting there.