Roman Krznaric is a public philosopher who writes about the power of ideas to change society. His new book explores the virtues of long-term thinking – essential for good intergenerational policy. Will the current COVID-19 pandemic be a critical landmark on the three possible paths that lead into the future? 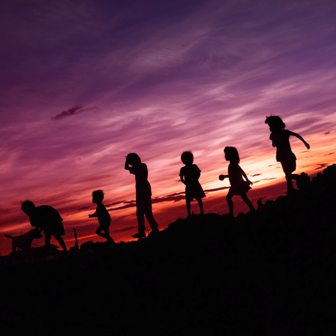 There is no doubt that COVID-19 is a crisis that particularly affects young people, even if it is older age groups that have been more susceptible to the virus itself. The under-25s have had their educations disrupted, they have been furloughed and lost jobs more than other age groups, they face the prospect of long-term unemployment, their generation will be saddled with public debt that has escalated, and they will carry the scars of increased loneliness and other mental health issues.

Multiple reports have already documented these impacts, which are affecting youth on a global scale, and especially those from Black, Asian and minority ethnic (BAME) communities.

But now let’s step back and take a long view. A very long view. Imagine looking back at the epidemic from the perspective of young people living in the year 2120.

In a hundred years from today, how will those future generations remember this moment in history? How important will this crisis – that seems so total and world-changing to us right now – appear a century in the future? Might it be hardly remembered at all, and be seen as just a small blip in a tragic historical trajectory that was shaped by far larger and more dangerous forces?

These are the kinds of questions I’ve explored in a new book called The Good Ancestor: How To Think Long Term in a Short-Term World. Of course, we can’t easily predict what a teenager in Miami, Istanbul or Shanghai might be thinking or experiencing in the early twenty-second century. But we can start contemplating the possibilities with the help of a diagram I call the “Three Pathways for Civilisation” (see graphic below), which is a thinking tool I’ve based on the Three Horizons framework developed by futures thinker Bill Sharpe.

It requires a bit of unpacking before we can start fitting COVID-19 into the picture. 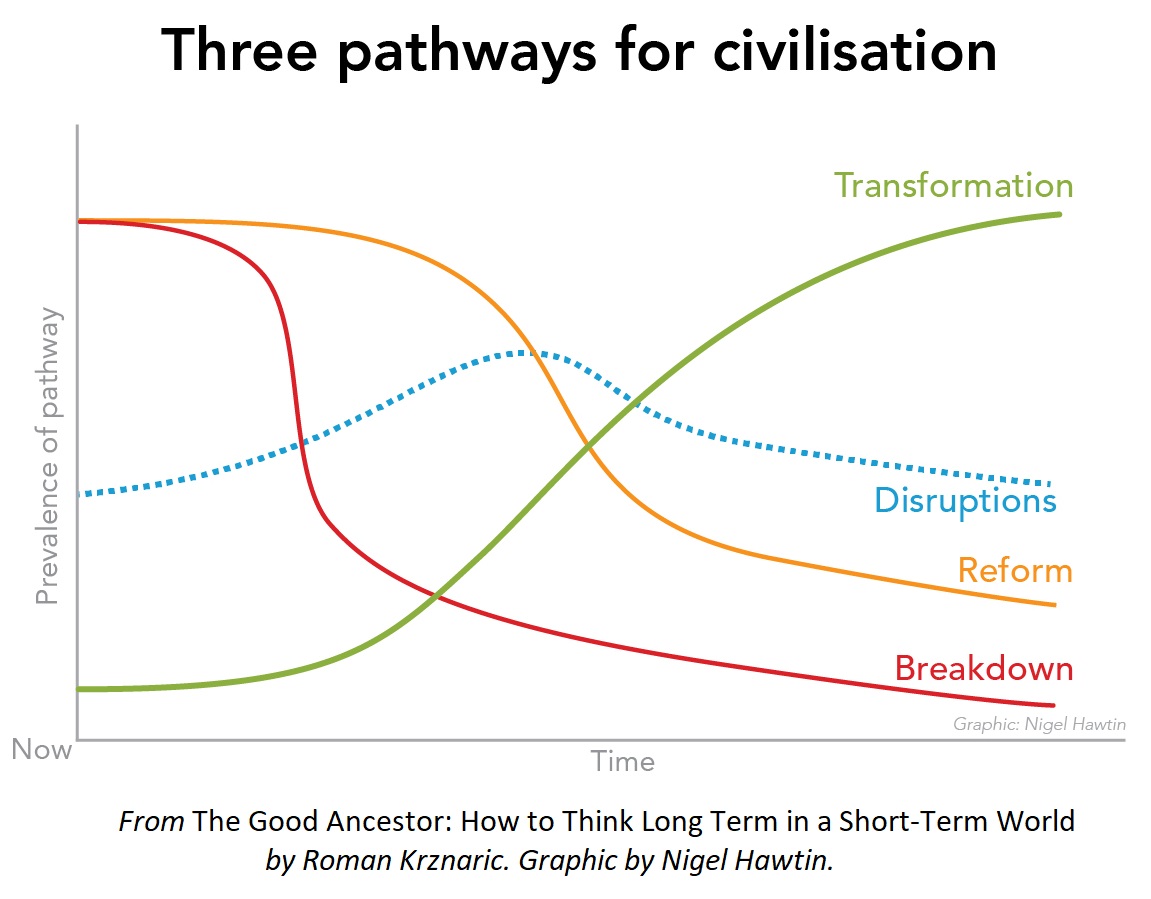 In coming decades, humankind faces multiple civilisational threats. Some of these are risks from new technologies, such as the possibility of genetically engineered pandemics or the risk of AI-controlled lethal autonomous weapons. Just as serious (and more likely) are the risks associated with our destruction of the ecological systems on which our wellbeing – and life itself – depends.

Our growth-addicted, fossil-fuel driven consumer economies are sending us over critical planetary boundaries such as on climate change and biodiversity loss, which threaten rising sea levels, food and water insecurity, and growing wealth inequality and social instability.

Turning to the diagram above, I envision three broad pathways that civilisation may follow in the coming century, each of which represents a dominant trajectory identified by experts in the field of global risk studies: Breakdown, Reform and Transformation.

Breakdown is the path of business-as-usual. Here we continue striving for the old 20th-century goal of material economic progress but soon reach a point of societal and institutional collapse in the near term as we fail to respond to rampant technological and ecological crises, and cross dangerous tipping points that send civilisation over a cliff edge.

Note, however, that the diagram includes a line called “Disruptions”. These are disruptive innovations or events that offer an opportunity to switch from one curve onto another. It could be a new technology like blockchain, the rise of a political movement like Black Lives Matter, or a natural disaster like an earthquake.

We are currently facing the seismic disruption of COVID-19. The big question is how it will impact on the civilisational pathway we follow.

It could be that the epidemic exacerbates the trend towards Breakdown. In this scenario, governments opt to find their way out of the crisis by reverting to the old model of continuous GDP growth and consumerism to revive the economy and tackle unemployment, irrespective of its ecological impacts. Businesses successfully push for weaker environmental regulation to help them overcome the challenging conditions created by the virus. And thus COVID-19 feeds into a trajectory of increasing social dislocation and ecological tragedy. Not very good news for the young people of 2120, who may view the epidemic as yet another factor contributing to the Breakdown world in which they could be living.

A second trajectory is towards Transformation. This is where we see a radical shift in the values and institutions of society towards a more long-term sustainable civilisation. We jump off the Breakdown curve onto a new pathway dominated by post-growth economic models such as Doughnut Economics or a Green New Deal.

In this case, COVID-19 could potentially play a positive disruptive role by kickstarting governments to embark on transformative new agendas that simultaneously address the economic crisis caused by the virus and the ecological threats we face. Such a response has emerged in the city of Amsterdam, which has recently adopted economist Kate Raworth’s Doughnut Economics model as the basis for its post-COVID-19 recovery programme. By following this pathway, future generations may remember the epidemic as a wake-up call that set humanity onto a more balanced and sustainable trajectory.

The most likely pathway for humankind is Reform. This is where we respond to global crises such as climate change but in an inadequate and piecemeal way that merely extends the Breakdown curve outwards, to a greater or lesser extent.

Here governments put their faith in reformist ideals such as “green growth”, “reinventing capitalism”, or a belief that technological solutions are just around the corner. But such weak compromise solutions fail to create any radical shifts in our economic or political systems, and we still end up heading down the curve, though maybe not as steeply as in the case of Breakdown.

In this third scenario, COVID-19 may play little role at all. Perhaps it will temporarily weaken the current neoliberal paradigm and strengthen the role of the state, but the fundamental dynamics of our global civilisation remain largely unaffected. In this case, if the youth of 2120 have any memory of COVID-19, it may be seen as a lost opportunity to reset civilisation onto a Transformative pathway.

Getting past the present

In identifying these three broad pathways, I in no way wish to underplay the very real challenges that COVID-19 will create for young people in the months and years ahead. I simply want to stress that there can be value in taking a much longer view of the crisis and its impact on future generations.

As I see it, we are at a pivot point in history. We face an existential choice of how we respond to the epidemic. We could allow the crisis to exacerbate the trend towards Breakdown or lacklustre Reform. Alternatively, we can choose to use it as an opportunity to make the leap onto a Transformative pathway.

By doing so, we may well be remembered by future generations as good ancestors.