The COVID-19 pandemic is accelerating Brazil’s brain drain, and consequently affecting Brazil’s intergenerational development plan and its educational future, writes João Leal, recent MSc graduate of the London School of Economics and now Policy-Maker at the State Secretariat for Social Development in São Paulo. First, to help us understand the chaos that Brazil is facing right now, he takes a brief detour throughout Brazil’s recent scientific and political past. 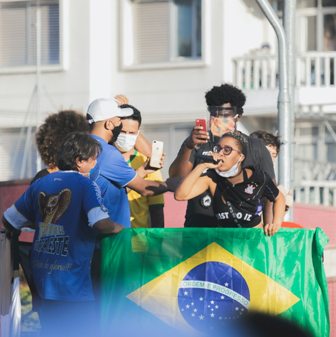 A Brief History of Our Science

Large-scale science research in Brazil began only at the start of the 20th century, with research into tropical diseases and developing vaccines. Brazil’s scientific backwardness became clear for our State (and Army) during WWII when Brazil’s contact with the American Military demonstrated that scientific research was essential for our long-term national development.

(By “scientific research”, I am referring here to a broad concept that measures the quality and quantity of scientific production being done by a university or a country. It can be measured in different ways: by articles published, patents granted or laboratory research being conducted.)

As a result, the government fostered the creation of universities and research centres, something that remained uninterrupted even during the dark days of our military dictatorship. Our re-democratisation process assured government funds for Education and Science, and science research production in Brazil started to catch up with other Latin American countries.

When Lula and his Workers’ Party were elected in 2002, science became an essential tool for long-term development in Brazil. Lula increased investment in science and technology fourfold, created 14 universities, 38 federal institutes, and 123 national science and research institutes. The country began to develop cutting-edge science research in agriculture and energy, increasing the soybean yield, developing ethanol on a large scale, and championing global research on offshore oil platforms. Brazil invested almost 2% of its GDP in science. But Dilma, Lula’s successor, promoted scientific policies with high investment and terrible return, and government cuts to the science budget started in 2014. The following year, 2015, marked the first year of what would become an ongoing brain drain from Brazil.

A Brief History of Our Obscurantism

Bolsonaro was elected president in 2018 with 55% of the vote, amidst a reactionary political wave prompted by corruption scandals and political denouncements of the Workers’ Party (PT).

Having been elected as the champion of “anti-petismo” (Anti-Workers’ Party), Bolsonaro began to draw his basis of political support from a few different groups in Brazilian society, mainly anti-corruption advocates and sectors of the business community who believed it necessary to reduce the government’s influence in the economy. Besides those groups, Bolsonaro is also backed by military circles that are closely associated with Brazilian dictatorship and olavistas – followers of Olavo de Carvalho, a Richmond (Virginia)-based “philosopher” known for his anti-communist, anti-science and ultra-right point-of-view.

Since his election, the inexperienced Bolsonaro has ruled with a political triumvirate made up of two “super” politicians, the Minister of Justice, former judge Sérgio Moro (who brought the corruption charges against Lula) and the market-oriented minister of the Economy, Paulo Guedes.

After a year of learning how to govern, Bolsonaro indicated that he wanted to dismantle the triumvirate and tried to rule on his own. However, Moro pre-empted the move by leaving the government and accused Bolsonaro of interfering in anti-corruption investigations against his (Bolsonaro’s) son. Politically dependent on his other support groups, Bolsonaro – who never believed in science and who recently made a statement saying that books nowadays have too much text – started to govern for his anti-science political base.

Before the pandemic, the government’s relationship with universities and the scientific community was already in turmoil. In Brazil’s political history, education for all was considered a leftist agenda and became closely associated with the educator and philosopher Paulo Freire, Brazil’s most globally famous scholar. During Lula’s government, this association between education and the political left was reinforced. Naturally, amid Paulo Guedes’ budget cuts, the education and science sectors suffered more than most, and public universities had more than 85% of their budget frozen.

But the relationship between government and science has become even worse during the pandemic. Bolsonaro contested the scale of the crisis, tried to prevent businesses from closing for fear of economic repercussions, and reduced the number of COVID tests. Cornered by his government, he fired a health minister who advocated social isolation, and caused another to resign by forcing him to sign a bill encouraging doctors to use chloroquine, a drug whose effectiveness against COVID has yet to be proven. Brazil’s government has turned its back on science and experts’ advice during the most critical public health emergency of the last 100 years.

Brain drain of the young

The economic crisis, ongoing since 2015, severely affected the job market for people with higher qualifications in Brazil. The under-occupation rates for college graduates increased by 160%, and unemployment rates reached 25% for people with a master’s degree (as opposed to 14% for the entire population).

Cuts in government funding have affected scientists in Brazil disproportionately, as Brazil’s 15 largest universities in terms of scientific research and 8 of its 10 largest research institutes are public and rely on state funding. The lack of funds and contempt towards science from the government has accelerated the brain drain trend among young scientists, a phenomenon that has been occurring since 2015, but has recently acquired a new scale.

The historical migration from Brazil never constituted a great population exodus. For example, the Brazilian migration rate is only one migrant per 100,000, much lower than Mexico’s 18 or Peru’s 22. However, the profile of the Brazilian migrant differs from that of our regional neighbours, tending to be more upper-middle-class, with higher educational attainment and qualifications. Immigration is also made easier for the elite by the fact that it is easy to find ancestry from early-20th century European migrants and claim European Union passports. Between 2002 and 2017, Portugal issued over 54,000 passports to Brazilian citizens, while Italy issued 30,000 and Spain 26,000. The number of work visas for Brazilians in the United States has also increased.

It is precisely this young, highly-qualified elite that has emigrated abroad for the purposes of pursuing research. Outside Brazil, local funding, the possibility of working with global-reaching professionals, and the lack of bureaucratic barriers for scientific inputs increase the prospect of finding work and conducting quality research.

This brain drain can greatly affect the educational quality of young generations of Brazil and, by extension, our long-term development. Currently, Brazil has 700 researchers per 1 million inhabitants, much fewer than China (1,100), Russia (3,100), European Union (3,200) or the United States (3,900).

Immersed in immediate problems and their consequences, recent governments have done little to review this brain drain trend, which is only increasing. Although Brazil is historically well-regarded in terms of data transparency, there is little information about international immigration. The only public policies currently being developed are networks built by the Brazilian embassies in London and Washington, aimed at establishing research partnerships between researchers in Brazil and researchers in foreign countries. Despite the importance of public policies promoting collaboration between different countries’ academics, it should be accompanied by broader action aimed at reducing the net migration of qualified researchers.

Brazil is at risk of decisively losing a generation of Brazilians who could contribute to the national scientific, educational, and economic development in the long term. The productivity of Brazilian workers is already below the global average; the flight of human capital can have an enduring intergenerational impact on Brazilian innovation and the higher value–added sectors of our national economy.

In addition to the economic and social security impacts of this flight of the young intellectual elite, national universities may suffer from a shortage of professionals. Therefore, this brain drain trend can have lasting effects, crippling Brazilian scientific research in the short term and promoting an intergenerational gap in Brazilian education.

Currently, it is hard to think beyond the COVID pandemic and our national political crisis. Anguished by the dreadful present, we young Brazilians have a hard time envisioning a brighter future. However, focusing solely on immediate problems might take a toll, as those who can help us reach this brighter future are currently leaving the country.