Here’s some good news for the planet: the human population is set to peak and stabilise, not rising much above  9.7 billion, the total that it will reach around the year 2050, according to the latest UN figures. Danny Dorling, Halford Mackinder Professor of Geography at Oxford University, explains how this works, and why it is something to celebrate.

On Monday 17 June 2019 the United Nations revealed momentous news. The world did not notice, but soon it will. The headline of their own report read “9.7 billion on Earth by 2050, but growth rate slowing”.

Some parts still growing, but…

The United Nation’s report concentrated on where there will still be the most growth. To quote: “India is expected to show the highest population increase between now and 2050, overtaking China as the world’s most populous country, by around 2027. India, along with eight other countries, will make up over half of the estimated population growth between now and 2050. The nine countries expected to show the biggest increase are India, Nigeria and Pakistan, followed by the Democratic Republic of the Congo, Ethiopia, Tanzania, Indonesia, Egypt and the United States of America.”

But their report continued: “The population size of more and more countries is actually falling. Since 2010, 27 countries or areas have seen a drop of at least one per cent, because of persistently low fertility rates. Between now and 2050, that is expected to expand to 55 countries which will see a population decrease of one per cent or more, and almost half of these will experience a drop of at least 10 per cent.”

The UN did not mention their new 2100 prediction in this particular press release. The first graph below shows the number of people the UN estimate have been (and will be) aged 18 each year from 1950 until 2100. The future they predict is remarkably smooth. 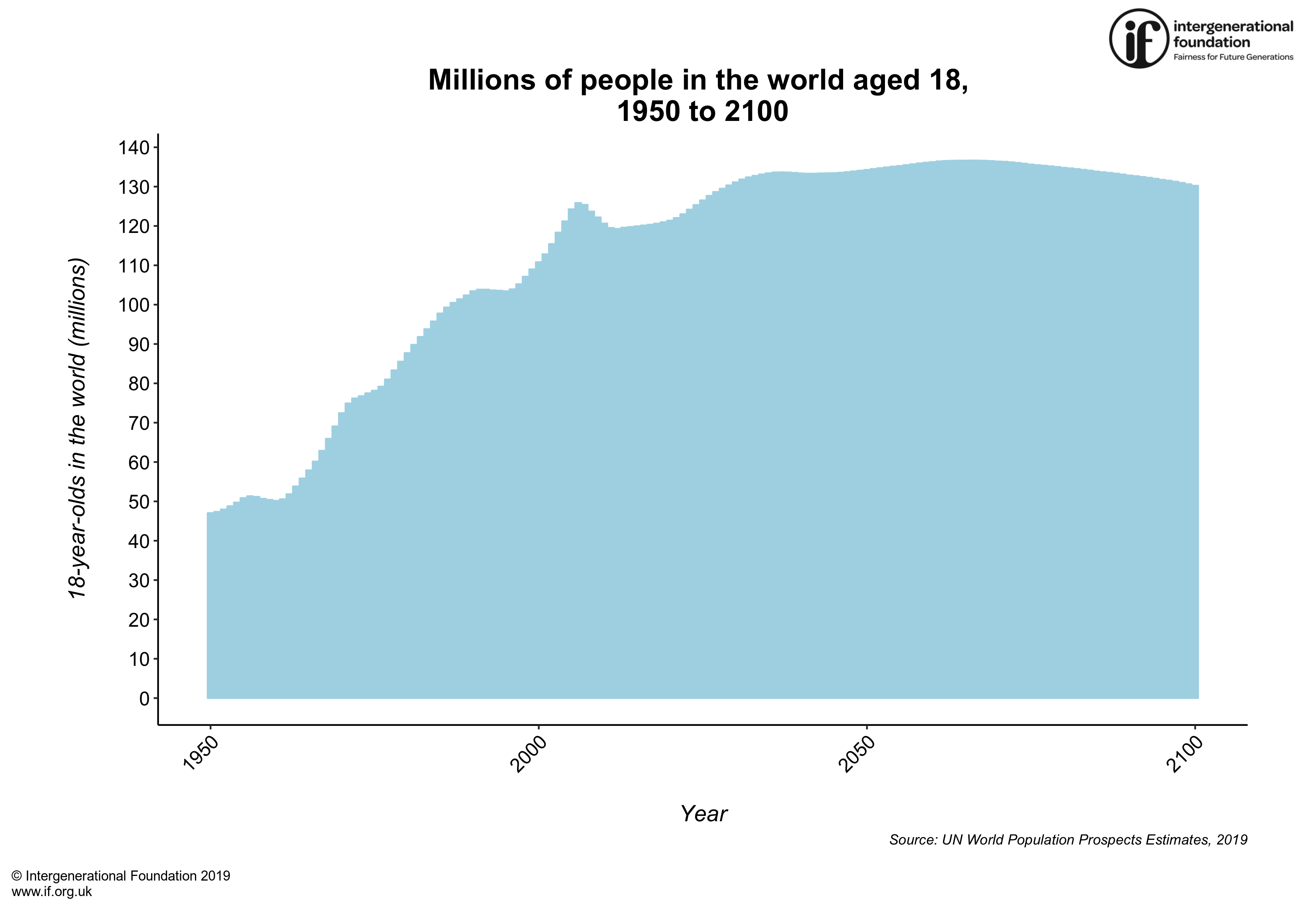 However, some reporters noticed that something was very new: “The world’s population is slowing down and could stop growing – or even begin decreasing – by 2100” one noticed, before adding that “…[UN population] division director John Wilmoth said this outcome ‘is not certain and in the end the peak could come earlier or later, at a lower or higher level of total population.’”

However, John’s central projection for the year 2100 is now 10.9 billion people, 300 million fewer than the UN said they expected, the day before.

Even fewer babies – but longer lives

Human population growth is slowing dramatically and it is slowing because people are having fewer and fewer babies as compared to their parents – everywhere – without exception.

More importantly, they are having fewer than we thought they would have a few years ago when the fertility rates were already reducing dramatically and unprecedentedly. Our species has never – ever – had so few children.

The reason why the total human population of the planet will keep on growing for 50, or 60 or 70 years (but almost certainly not for 80 years) is because people are living longer. It is now no longer because we are having more children.

If people in a particular place live for 80 years rather than 40 (on average), they double the number of people found in that place at any one time without a single additional baby needing to be born.

The human species is ageing – rapidly. More rapidly than we thought it was by Monday 17 June 2019! And this is wonderful news because it is caused by fewer people dying when young and healthcare for the elderly improving. 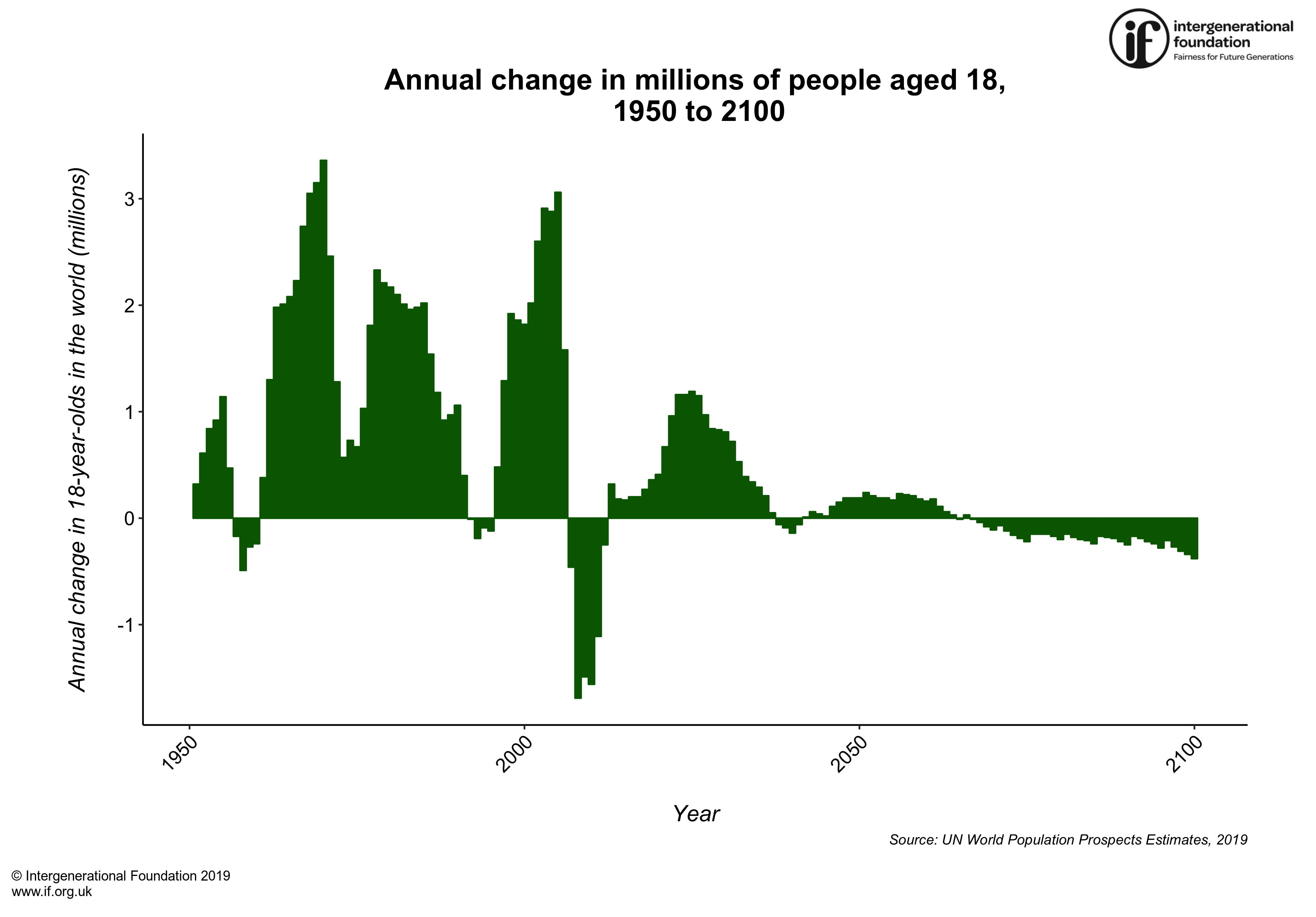 It is the trend in the corrections to the UN revisions that matters most. In the 2011 estimates the UN demographers suggested that 10 billion was most likely by 2100. The subsequent 2013, 2015 and 2017 revisions updated that estimate to just over 11 billion. But now the 2019 revision is reducing that estimate again.

Six years ago, on 11 June 2013, I published a book titled Population 10 billion in which I made a guess that the UN were getting it wrong. It was just a guess, but it turned out to be right. The reason they were making this mistake, I said, is that they had failed to notice an echo of a baby boom. They were using very current fertility estimates to project forwards, unaware that fertility at the start of this current century was slightly and unusually elevated – due to so many people turning 18 around the year 2005.

The slowdown in the growth and then the fall to come in young adults worldwide raises all kinds of issues.

In general, smaller generations have been more powerful generations in the past. Their bargaining position is better. Each child becomes more precious.

But in strange times like these, people begin to try to imagine all kinds of new scenarios. However, “artificial intelligent” robots are not going to replace the young. The reason why is simple. We are an animal, evolved to be acutely aware of just how much attention we are or are not getting from others of our species. That is how for millennia those of us that survived, survived. We were cared for, and cared for our young. Most of us are acutely aware of even the smallest slight we receive, the mildest of ignoring. Most of us warm with happiness when we are praised by those we love. Emulating humans to fool other humans with machines is a fools’ game because it is trying to compete with what drove our evolution. Instead, robots are best used to undertake repetitive tasks that our inquisitive nature hates.

Predictions in a precarious world

What is likely to happen next? Look again at the graph above of the future change in the number of 18-year-olds predicted to carry through to the year 2100. Note how the UN prophesies a rapid move towards stability. To achieve that, every 18-year-old has to have slightly more than two children each (because a few babies will still die even in the most utopian of futures).

But then look at what has happened most recently. Look at the falls between 2007 and 2013 in the graph above and note how that plummeting below the line almost exactly fits the gap that can be seen in the time series between 1991 and 1996, around 17 years earlier.

Young adults in future are unlikely to conform to what the UN demographers currently predict. If we manage to avoid world war, famine, pandemic and severe prolonged global economic crisis, then young people will continue to have fewer and fewer children each – for some time to come. It is what women want. And more and more women now get what they want.

Finally, if you find it hard to believe that the finest demographic minds the world can muster might still be making a mistake, even though they now are at least moving their predictions down toward what reality is telling them, look at the last graph in this series of three, below. The graph shows the “change in change” each year in 18-year-olds.

This is just one change figure subtracted from another. To give an example in 2006, 2007 and 2008 the number of 18-year-olds thought to be alive worldwide on 1 July each year was 125.850, 125.386, and 123.692 million respectively. The change between those three numbers was -0.46 and -1.69 million: the population was falling, and the change in change between those two numbers, the rate of deceleration or acceleration, was -1.23 million – a rapid deceleration (or acceleration in the rate of fall if you want to see it that way).

The final graph below shows all of those “change in change” figures derived from the very latest UN population estimates for the world. Each great deceleration – the troughs in 1955, 1972 and 2007 – has been greater in magnitude than the last.

Now look at what the UN think will happen in future and then start planning for even fewer 18-year-olds than they are now suggesting there will be. Because they are still ignoring this clear downwards trend. 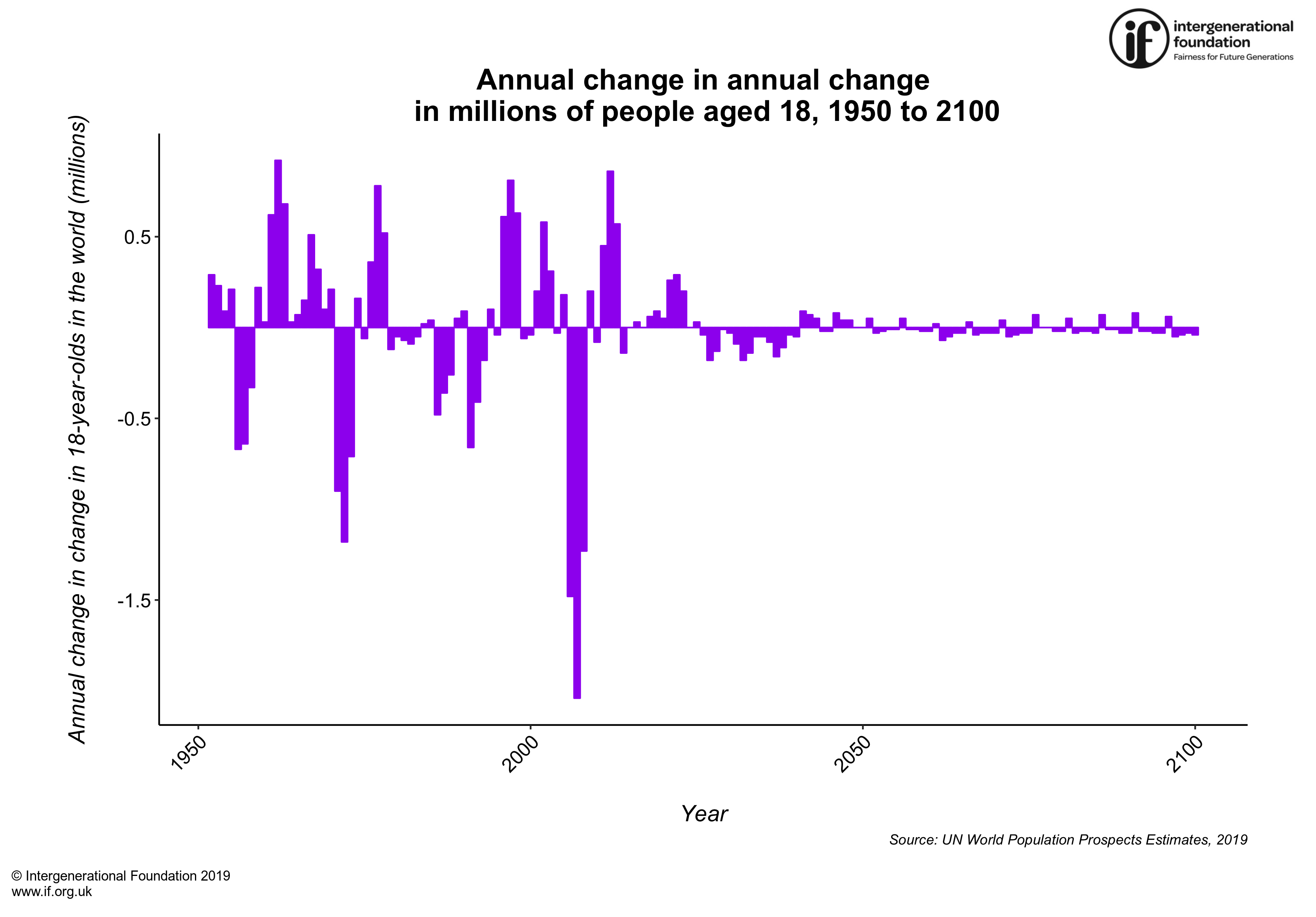