Renters in the UK – who are disproportionately young adults – enjoyed a big win last week with the announcement that no-fault evictions will be banned in future. David Kingman explains why this is an important step forward for intergenerational justice 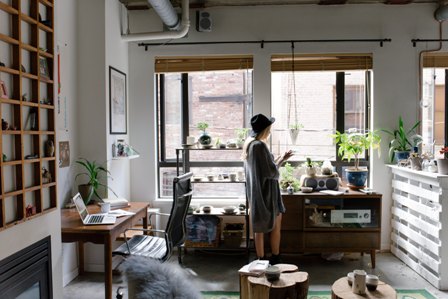 One of the biggest disadvantages of being a private renter in the UK is that it is often extremely precarious because the majority of private tenants have very few protections against being evicted at short notice. On 15 April, the government announced a new policy measure – one which had long been called for by housing activists – which should give private tenants more security by abolishing so-called “no-fault” evictions, which are carried out under Section 21 notices.

Why is private renting so insecure?

As IF and other housing-focused charities have pointed out in the past, the UK is something of an anomaly amongst European Union countries for having a large private rented sector but not giving private tenants a strong degree of legal protection.

It is well-known that private renting in the UK is highly insecure, with a large proportion of tenants moving house frequently – an analysis by the housing charity Shelter showed that in 2013/14, 25% of private renters moved house, compared to only 5% of social renters and 3% of owner-occupiers; 29% had moved three or more times in the previous five years (which rose to 37% in London).

In part, this is likely to be the case because certain types of people who lead unusually transient lives are more likely to be living in the private rented sector in the first place, such as university students and migrant workers, but it also reflects the ease with which private tenants can have their tenancy agreements ended by their landlords.

The reason why renting privately in England is so unstable is because tenants enjoy virtually zero legal protection from being evicted if they are renting under the Assured Shorthold Tenancy (AST) agreements that predominate within the private rented sector, which usually last for either 6 or 12 months.

As you would expect, landlords are allowed to terminate a tenancy agreement if they have legal grounds to do so, such as the tenant having violated the tenancy agreement by not paying their rent or by causing damage to the property; this is called “eviction with grounds” and is activated by the landlord sending his or her tenant a notice of eviction under Section 8 of the 1988 Housing Act.

This is often referred to as a “no-fault” eviction because the tenant hasn’t done anything to breach his or her tenancy agreement, and it has long been seen as one of the most controversial aspects of the UK’s private rental system because it means that anyone can effectively be evicted after six months as long as their landlord serves them with the right notice (which may leave them with only eight weeks to find somewhere new to live).

The instability which this system creates for private renters has a number of negative consequences. In the immediate term, it exposes tenants to having to pay moving costs and contributes to rental inflation because landlords can let existing properties at higher prices more quickly; over the longer term, moving this frequently is likely to interfere with having a normal family life, particularly for the quarter of families with children who are private renters, as it disrupts children’s schooling and gives families less of a stake in their local communities.

The existence of no-fault evictions may also have enabled some landlords to get away with letting substandard properties, if tenants are worried about being evicted if they ask for repairs or maintenance work (the media has found many case studies of tenants who claim they were evicted after requesting repair work on their properties, although it’s difficult to know how widespread so-called “revenge evictions” really are).

The issue of instability within the private rented sector has also zoomed up the political agenda in recent years partly because of the dramatic rise in the number of households who are declared statutorily homeless after being evicted from private rented accommodation who then haven’t been able to find anywhere else to go. The ending of an assured shorthold tenancy is now the single biggest cause of statutory homelessness in England, now accounting for about a third of all cases of homelessness each year.

What has the government done?

The new move announced by the government is designed to bring the level of security enjoyed by private rental tenants in England into line with those in most other European Union countries which have a large private rented sector (although confusingly, this will also mean that private tenants’ rights regarding eviction will now differ markedly in England, Wales, Scotland and Northern Ireland, so someone who rents accommodation anywhere in the UK will need to keep abreast of which set of rules apply to them).

Although not all of the details have been fully announced, it sounds as though the government’s plan is simply to ban Section 21 eviction notices in England, which will mean that a landlord who wants to evict a tenant will have to have one of a limited number of legally accepted reasons for doing so (such as the tenant having breached his or her tenancy agreement, or the landlord wanting to sell the property or move into it themselves).

The government’s goal is to make it much more difficult for landlords to evict tenants who have obeyed the terms of their tenancy agreements and who are still paying their rent on time, so this should make short-notice evictions and so-called “revenge evictions” far less common (although it won’t eliminate short-notice evictions completely because landlords can still enact them if they have a valid reason under Section 8).

Research published by Shelter in 2016 demonstrated that England was an anomaly for guaranteeing private rental tenants’ security of tenure for only six months; the majority of major European countries, including Germany, the Netherlands and most of Scandinavia, already only allowed landlords to evict tenants if they had a reason which accorded with a strict set of legal criteria.

Although the situation facing many of England’s renters is still far from perfect, this move should go a long way towards giving more of them peace of mind about how long they’ll be able to stay in the home they live in.