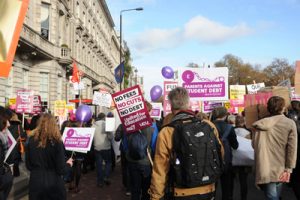 Final-year politics student and IF volunteer Beth Jenkinson explores the problem of youth disengagement in electoral processes across Europe, and discusses what should be done to resolve the issue

We all take for granted the apparent crisis of our politically disengaged youth. Young people just don’t vote, so people say. Apparently this symbolises their wider disengagement with political systems as they currently operate. And that’s a problem, obviously. But since it’s the choice of young people not to vote, then frankly – we might conclude – we can’t do too much about it.

There are two main issues with this way of looking at things. Firstly, it is hopelessly reductionist. There is evidence to show that young people are politically engaged: they are more active than older generations in many forms of non-electoral political and civic participation. The problem with electoral engagement, then, does not necessarily have political disengagement at its source.

The second issue is simple: we need to find a solution to the problem, not just shrug our shoulders at it. The political disengagement of young people is not inevitable, so what efforts have been made to re-engage our youth? Have they been successful? Paradoxically, it doesn’t seem like politicians are engaging with the problem of disengagement. How can we ensure that representative democracy works for young people?

Political disengagement is an issue for Europe’s youth. Or is it?

The Millennial Dialogue (a research project of the Foundation for European Progressive Studies) found that none of the following countries scored higher than 20% for the percentage of young people who identify as being interested in politics: Germany, Italy, Austria, the UK, Bulgaria, Norway, USA, Poland, Chile, Canada and Hungary. An LSE study from 2013 further noted that the percentage of young people who voted in their previous national parliamentary election was 59% averaged across the EU15 countries (Austria, Belgium, Denmark, Finland, France, Germany, Greece, Ireland, Italy, Luxembourg, Netherlands, Portugal, Spain, Sweden, the UK), compared with 82.1% of the general population. This shows a large disparity between different generations. In the UK 2015 general election, estimates by Ipsos MORI suggest that voter turnout among the 18–24 year olds was as low as 43%, compared with 78% for those over 65. Research carried out by the Intergenerational Foundation has shown that across 28 European countries, participation by young people in national elections has been consistently around a third lower than the population average.

All of this seems to suggest that young people are disengaged with politics. But let’s talk about the recent Facebook protest which saw people – predominantly young people – around the globe remotely “check in” to the Standing Rock Indian reservation in North Dakota with the aim of helping activists by distracting police surveillance away from them. Let’s talk about the countless protests and demonstrations led by young people on issues close to their hearts: tuition fee rises, the refugee crisis, and more. Studies have shown that young people are politically engaged, just in non-traditional ways.

The lives of young people are increasingly dominated by the internet, and 15–24 year olds are found to form the biggest group of internet-based participants. Online political activity can take many forms: online petitions, blogs and vlogs, charity sites and crowd funders, interaction with politicians and political organisations via social media platforms such as Twitter, and much more. How engaged with online political activity must young people be before they are deemed by society to be “politically engaged”? Young people are also more likely to involve themselves in politics via direct action. According to the LSE study referred to above, 13.7% of young people averaged across the EU15 countries had participated in a demonstration in the past year, compared to 7.8% of the general population.

Both of these mechanisms for political action – direct action and online activity – have in common that they do not conform to the patterns of traditional political institutions. The openness of the internet means that no voices are privileged: posts from unknown bloggers are as accessible as mainstream media headlines; politicians interact with ordinary people on Twitter; internet users are as likely to be influenced by political institutions from different countries as they are by domestic organisations. This contradicts the traditional role of mainstream, domestic political systems and processes as the core providers of political information. Protests, meanwhile, are a clear demonstration of dissatisfaction with established organisations, and often with the government.

These subversive media of political activity show that young people remain politically engaged in the general sense of civic interest and action, but they are fundamentally angry with the institutions and politicians that claim to represent them. This is one reason for the electoral disengagement we have seen in recent years. This idea is supported by focus groups conducted in six European countries by the LSE which showed that 95% of respondents felt “overwhelming levels of perceived betrayal, distrust, scepticism and/or anger” with regard to politicians. Moreover, youth turnout was increased in the EU referendum this year: according to a poll by Opinium turnout for 18-24 year olds was around 64%, showing that youth interest is issue-based rather than traditionally related to political parties.

What can we do?

That young people systematically vote less than older generations is a problem for representative democracy. Increased youth participation in the voting process would make political processes more accountable to young people – forcing policy-makers to consider youth issues. It would also encourage young people to engage more with civic activity in general, and to become more politically informed. So, what can we do about it?

If young people are not generally politically disengaged, but instead disengaged with traditional mechanisms of political action, then there are measures that can be taken to reconcile this problem. Political education in schools could help, as it has been shown that political knowledge increases the likelihood that someone will vote. In particular, a study by the LSE Department of Government and STICERD (Suntory and Toyota International Centres for Economics and Related Disciplines) showed, using data from the British Election Survey, that “information is amongst the most important explanatory variables of electoral participation”.

This should be combined with efforts from politicians to engage with young people, such as by visiting schools and universities. In their report “Youth Participation in Democratic Life”, the European Commission’s Education, Audiovisual and Culture Executive Agency (EACEA) suggests that this would be a valuable mechanism for alleviating youth disenchantment with politics, since it would signal to young people that politicians were interested in engaging with them. To this end, political parties should also aim to engage more with young people’s issues in their policy plans. It has been demonstrated that political parties that showed more commitment to youth issues in their manifestos for the 2015 UK election also accrued more votes from young people.

Another avenue to explore is increased representation: this could take the form of lowering the voting age to 16, as has been done in Austria and in the Scottish independence referendum, and introducing youth representatives to parliament. This would hopefully push policy-makers to consider the impact of policies on young people more, again contributing to increased youth interest and decreased disenchantment. Moreover, the data show that, in the Scottish referendum, 16–17 year olds were 1.39 times more likely to vote than 18–24 year olds.

There are many adjustments that could be made to increase youth turnout across the Western world; this blog has explored only a few of them. The take-home message, though, is that politics needs to begin engaging with young people on their level. It is no wonder that young people have become uninterested in political parties that have ignored their interests. It’s time for changes to be made, and for young people’s concerns to be considered.