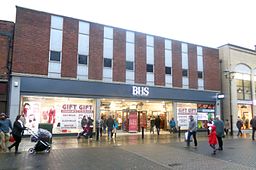 The recent news that retailer British Home Stores – an august feature of UK high streets for more than half a century, with 11,000 employees and 164 stores – has gone into administration has dominated business headlines over the past couple of weeks. Something which has received a particularly large amount of attention has been the potential impact this could have on the firm’s pension scheme, as the business has over 20,000 pension holders and liabilities worth £571 million.

Given that pensions are inherently an intergenerational issue, does this mean there is a significant question of fairness between the generations behind the BHS story?

Owing to reforms which were undertaken by Tony Blair’s government in the early 2000s, workers’ pensions are protected if the firm employing them goes bust. This protection is provided by a body called the Pension Protection Fund (PPF), which essentially absorbs the orphaned pension scheme and continues running it so that workers still get (most of) what they were expecting.

Usually, former workers who have already begun drawing their pensions continue receiving 100% of the amount they were previously (on the grounds that it would be unreasonable for them to have to adjust to a lower income); workers who have not yet retired usually receive up to 90% of what they were expecting to get when they eventually retire, up to a fixed cap (which is currently £37,402.42 per year). Pensions are indexed in line with CPI, and spouses and civil partners of beneficiaries from the PPF get survivor benefits worth 50%.

On paper, these arrangements appear to strike a relatively fair balance between workers – the vast majority of whom usually weren’t responsible for their former employer going out of business – and the people who bear the burden of funding the PPF. The scheme is largely paid for out of a compulsory tax on all other defined benefit (final-salary) pension schemes, in addition to a share of the assets taken from the companies which have gone bust; according to the House of Commons Library, it now provides pensions to over 250,000 workers, and has over £20 billion worth of assets and an annual surplus of £4.8 billion, so surely everything is rosy for now?

This may be true up to a point, but there are significant concerns about fairness which are being raised by the prospect of the PPF having to absorb the BHS pension scheme, and potentially the schemes of some other private sector employers which have large deficits, including the troubled steelmaker Tata Steel.

The level of PPF levies is controversial, particularly with small businesses: The Guardian recently cited the case of a small firm whose PPF levy equates to more than its annual corporation tax bill. Ultimately, solvent firms which have done nothing wrong themselves have to meet their PPF contributions by not spending money on other things, such as paying higher wages to their staff or making larger pension contributions on their behalf. In that sense, young workers can end up subsidising very generous pension arrangements for people who are covered by the PPF.

This cross-generational subsidy relates to the larger issue of how private sector defined benefit pension schemes are funded, many of which have large deficits which effectively suck money away from consumers and younger employees towards their older workers and retirees. This situation has been exacerbated in recent years by the era of low interest rates, which makes pension scheme liabilities appear very large because companies have to assume when they account for them that they will only get a very low return on their assets.

Paul Johnson, the director of the Institute for Fiscal Studies, estimated in a recent article that private sector firms are now having to spend around £50 billion per year servicing their defined benefit pension obligations, which he argued constitutes a massive transfer of wealth from young to old:

“That’s money that has to come from somewhere. That somewhere will be from current employees, current shareholders or current customers. There is good evidence emerging that employees are picking up a good share of that cost through lower earnings. At least part of the slowdown in earnings growth, which started well before the recession hit, can be put down to spiralling DB pension liabilities and the burden on employers of covering them.

“Not only are younger workers not benefiting from generous DB pension provision — nearly all schemes are closed to new members — but they are paying the benefits of pensioners and older workers. This should always stand alongside the housing market and state pension policy when considering issues of intergenerational equity.”

He went on to argue that this raises awkward questions about whether it is actually always the fair and just option to fulfil pension obligations in full, even when it involves taking such a large amount from one group to give to another.

Mr Johnson himself is part of a task force which has recently been convened by the Pensions and Lifetime Savings Association to look at this very issue; the House of Commons Work and Pensions Select Committee has also launched its own inquiry into the BHS collapse and its impact on the PPF, and IF will shortly be publishing our own report on the impact of private sector defined benefit pension obligations on the UK economy. Clearly, these are awkward questions, but at least there now appears to be a serious debate going on about how we should answer them.