Angus Hanton, co-founder of IF, points to the intergenerational lessons in recent Conservative Party ructions 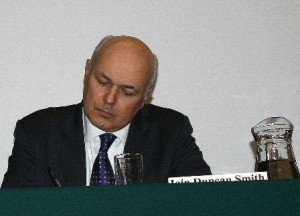 Iain Duncan Smith’s resignation has upset the applecart in several ways: it has shown that the Conservative’s “quiet man” can make a loud splash, it has thrown the disability payments regime into some confusion, and it has put intergenerational fairness even higher on the political agenda than it was before. IDS said in his resignation letter to the Prime Minister: “You are aware that I believe the cuts would have been even fairer to younger families and people of working age if we had been willing to reduce some of the benefits given to better-off pensioners but I have attempted to work within the constraints that you and the chancellor set …and wonder if enough has been done to ensure ‘we are all in this together.’”

This was a direct attack on the recent emphasis of government policy and a challenge to George Osborne’s claim that the budget delivered just two days previously was really a “budget for the next generation”.

Interviewed soon afterwards by Andrew Marr, Iain Duncan Smith repeatedly emphasised that he is a “one nation Tory” and explained that this means government should deliver policies that help everyone, very much including “those who have not voted for us” and those who “may never vote for us”. This idea is central to intergenerational justice because fairness for future generations must involve people voting for policies that help younger and future people. This will sometimes mean putting their own interests behind those of others. A pre-election “Granny bond” would not qualify as a measure to help poorer or younger members of society, though it might well help to “buy votes”.

At the Department of Work and Pensions Iain Duncan Smith has been constrained by the welfare cap, introduced during the Coalition government, which is a device for keeping welfare spending under control. However, the structure of this cap is fundamentally flawed because it does not include the state pension and some other payments to older people. The result of this deliberate omission is that state pension payments will be allowed to rise and will soon exceed all other welfare payments combined: state pension costs are now at about £95 billion per year out of total welfare spending of £220 billion.

This decision to exclude pension payments from the cap was surely made so that government could continue increasing the value of the state pension in real terms through the triple lock mechanism and continue to pay it to everyone however wealthy they are, and that decision in turn was surely politically motivated because pensioners vote in very large numbers and are assumed to vote for their own interests. If that’s right, this is a prime example of government’s failing to act for everyone and choosing instead to adopt policies for those “who do vote for us”.

All in it together

This is not a uniquely Conservative strategy: Gordon Brown was also focused on the votes of the older generation, however wealthy, and stated clearly in the 2010 prime ministerial debates that he would do whatever it took to keep older people living in their houses and would increase pensions.

Politicians of all parties naturally want to get re-elected, but many of them are willing to do better than that. But there is a tension: politicians who advocate policies which may be unpopular but good for the country are often punished at the polls – as Angela Merkel was recently when her party lost votes because of her decision to allow more immigration into Germany to help refugees and for the sake of future economy. What is needed, surely, is a wider recognition that politicians should be acting for the whole community and not only for those who elected them, and more examination of what policies would be best for younger and future people.

Photo: “Iain Duncan Smith at Nightingale House, London, in March 2010 in his role as Chairman of the Centre for Social Justice”, by Brian Minkoff – London Pixels, reproduced under the the terms of the Creative Commons Attribution-Share Alike 3.0 Unported license.