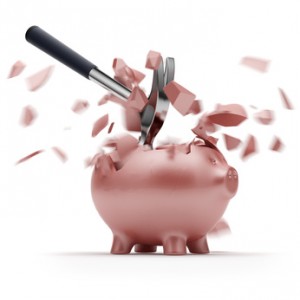 Putting money aside for the future is one of the most far-sighted things that people can do. Yet human beings are notoriously bad at deferring short-term gratification, and poor at estimating how long they will live or how much money they ought to be saving.

These are some of the main reasons why the state tries to help us with saving. Yet current pensions policy isn’t doing enough to make savers think long-term, and may even be having the opposite effect, according to two new reports which both came out recently.

The first of these is a piece of research from the Social Market Foundation think tank called Golden Years? What freedom and choice will mean for UK pensioners, which attempts to measure the effects of the new pension freedoms which savers have been given under the current government. To recap, the government has removed the requirement for people to buy an annuity with their pension savings, and introduced measures enabling savers to draw down their savings however they like from age 55 without incurring the tax penalties which existed previously to discourage them from taking large amounts in one go.

The government’s rationale for introducing these reforms was that people who have been prudent enough to save towards their retirement should be similarly prudent about how they use their money. However, the Social Market Foundation’s research, based on the behaviour of retirees in the USA and Australia, where similar systems were already well-established, suggests that most savers succumb to the urge to spend their money too quickly.

The two most striking findings from their report were that 40% of Australian savers withdraw their money so quickly that they run out by age 75, and that the average American pensioner is even less prudent, running down their funds at an average rate of 8% per year. Using a model which is based on the observed behaviour of these types of savers in Australia and America, the Social Market Foundation estimates that the average British pensioner who emulates their counterparts in either country would run through their resources within 17 and 10 years respectively – well short of average life expectancy.

Not taking the long road?

According to this analysis, giving savers so much freedom over what they do with their savings is almost encouraging them to use their money unwisely. Another recent report, by Dr Craig Berry for the International Longevity Centre, echoed a similar theme as it warned that the current regulatory framework encourages pension funds to behave in a short-termist manner by disincentivising long-term investments.

In Take the long road? Pension fund investments and economic stagnation, Dr Berry warns that the UK pensions system is not sufficiently geared towards encouraging pension firms to take long-term investments, particularly due to the decline of risk-sharing which has accompanied the shift from defined-benefit to defined-contribution pension schemes, with harmful consequences for the wider economy.

The government’s main success in regard to pensions policy appears to be automatic enrolment, which, according to a recent assessment by the National Audit Office, has led to the introduction of 5.4 million workers to pension saving. Indeed, their report suggests that the government deserves particular credit for achieving this in a relatively short space of time and with lower opt-out rates than were anticipated, while the programme has so far come in under its original budget (although the most difficult phase of the scheme – enrolling the smallest employers who between them account for the majority of UK workers – still lies ahead).

However, the other evidence which has been considered here suggests that getting people into pension saving in the first place is only half the battle; there is a danger it will be largely meaningless unless savers can be persuaded to contribute a reasonable amount towards their pension funds, which need to be able to make stable, long-term investments on their behalf, and then resist the temptation to burn through their money too quickly. People are unlikely to make the difficult decision to resist the temptation of spending unless they have the right policy environment to encourage them not to.