Anna Fitzpatrick, from the Centre for Sustainable Fashion (CSF), announces the “I Stood Up” event at the House of Lords on 24 February, and explains how fashion can help boost voter participation among young people at the upcoming general election 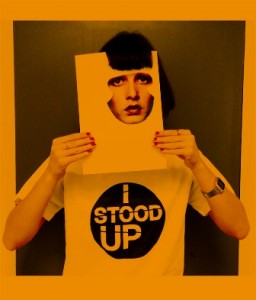 Fashion and politics… not necessarily classic bedfellows, but in the more uncertain and changing political climate of today, political engagement and expression seem more important than ever before. This is where fashion can come in: as a tool of identity creation, it both forms and expresses what we show or hide from the world, as well as crafting a sense of belonging and helping to mark us out.

With less than 100 days now until election day, much is being made about whether the Westminster elite can reach out of their bubble and gather together enough of the seemingly fragmented wishes of the electorate to gain an overall majority or cobble together a coalition of sorts. Each party needs all the votes it can get – including those of the 3.3 million young people who are eligible to vote for the first time on 7 May. Research by the think-tank British Future showed that only 4% of first-time voters felt that politicians listened to their views. With this in mind in the current political climate, researchers at the Centre for Sustainable Fashion have designed an event called “I Stood Up”, which will use fashion as a tool for both political engagement and expression.

Wearing a voice for change

I Stood Up will explore the concerns of first-time voters through the creation of a t-shirt, and fashion as a metaphor for participation and action as well as a facilitator of conversation around the political issues that first-time voters feel they want to express. The t-shirt in this context offers participants the chance to be a voice for change.

Through our research we have identified five broad themes under which their concerns may fall:

The fragmented dominant dialogue in this political climate is focused on the provision of healthcare and the future of the NHS as well as immigration, but space for the concerns of first-time voters (aged 18–24) is not necessarily provided.

Elections offer the opportunity not only to place our trust in one of the options open to public vote, but also, in the run up to election day, it offers citizens and politicians alike the chance to explore, question, engage and contribute to debate about what we value and how we mark progress. As the media are keen to point out, we are at a pivotal point in our governance and the debate about the role of democracy – and the real choice we have as voters is up for discussion.

Fashion in this context can act as the mediator of discussion and as a means to explore and express our individual feelings. Millions of people make choices about their identities every day through what they wear. Millions of others are denied freedom through fashion’s inequalities. This event will question what people stand up for as well as what they stand up in through participating actively in a democratic process.

Hosted during London Fashion Week, the I Stood Up event will be led by Baroness Lola Young and the Centre for Sustainable Fashion.

If you are interested in being taking part in the event, please register here. Note that the event is free, but you have to have to ticket.

The Centre for Sustainable Fashion (CSF) is a research centre based at the University of the Arts London. The Centre explores better lives and ecological resilience through fashion’s role in culture, society, politics, economy, ecology and identity.

Find out more about the Centre for Sustainable Fashion at www.sustainable-fashion.com; follow it on Twitter: @sustfash; or email: [email protected]