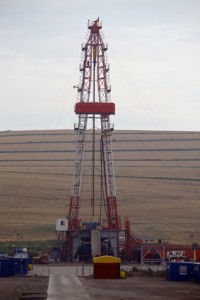 On 21 January, the House of Commons Environmental Audit Committee published a new report, Environmental Risks of Fracking, in which they called for the British government to place a moratorium on fracking, arguing that it will lead to higher greenhouse gas emissions by making oil and gas cheaper. However, the proposal was later overwhelmingly rejected by MPs, falling in a Commons vote by 308 to 52. Was this the right call from the perspective of future generations?

“Ultimately fracking cannot be compatible with our long-term commitments to cut climate-changing emissions unless full-scale carbon capture and storage technology is rolled out rapidly, which currently looks unlikely. There are also huge uncertainties around the impact that fracking could have on water supplies, air quality and public health,” according to the chair of the Environmental Audit Committee, Joan Walley MP.

Hydraulic fracturing, or “fracking”, is the process in which large volumes of high-pressure water mixed with other chemicals are used to open up small fissures in shale rock so that the oil and natural gas it contains can be released. The development of fracking in America has been credited with causing an economic boom and dramatically reducing the cost of oil and gas, although the industry’s critics have accused fracking installations of damaging the natural landscape, causing geological disturbances and contaminating water supplies.

The possible development of fracking in the UK has been controversial largely because of concerns from local residents about how the areas where they live might be affected. The Environmental Audit Committee’s new report is the first to suggest that it could also have a negative impact on Britain’s national climate change reduction targets.

Under the 2008 Climate Change Act, the British government has a legally-binding target to reduce the UK’s greenhouse gas emissions by 80% of 1990 levels by 2050. Shifting our domestic energy mix away from fossil fuels and towards renewables will need to be a major component of realising this target, which suggests that developing a major new industry based on fossil fuel extraction probably isn’t compatible with it.

So, were the MPs wrong to ignore the Environmental Audit Committee’s recommendation?

Not necessarily. In terms of Britain’s future energy policy, there are also two other considerations which need to be taken into account. First, although it is still a fossil fuel, natural gas – the main product of fracking – is much cleaner than coal. A report for the European Commission in 2012 suggested that shale gas might only produce half the carbon dioxide emissions that coal does when it is burnt to produce electricity.

Second, although we need to develop more renewable energy, Britain will still be dependent upon some traditional sources of energy in the future to act as a back-up when intermittent energy sources such as solar or wind are unavailable, or to cope with sudden peaks in demand. The fact that gas is significantly less polluting than coal means it would be a cleaner source of back-up energy, so exploiting the UK’s shale gas reserves might actually still be compatible with achieving our greenhouse gas reduction targets.

Indeed, the UK has started burning more gas over recent years partly in order to reduce its dependence on dirtier forms of energy, but at the moment most of this has to be imported from the Middle East and elsewhere, making our supplies vulnerable to the shifts in global energy markets.

The BBC quoted Professor Quintin Fisher of the University of Leeds, who said in response to the Environmental Audit Committee’s recommendation that “gas will be a significant part of the UK’s energy mix for the foreseeable future and it is preferable that we are as self-sufficient as possible. Hopefully, MPs will reject the findings of this report and allow UK citizens to receive the economic and social benefits that shale gas extraction could bring.”

To frack or not to frack?

Ultimately, the question of whether the UK should exploit its shale gas resources or not is an extremely complex issue, which needs to be seen in the broader context of planning for Britain’s future energy mix. However, the argument that fracking will automatically lead to higher greenhouse gas emissions – and be bad for future generations – may be flawed.