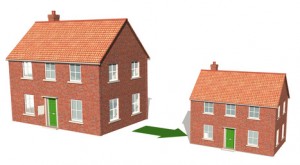 People who are approaching retirement in England could be losing some of their traditional antipathy towards downsizing their homes, according to new research from insurance company Prudential.

Why do people want to downsize?

The research, based on survey evidence gathered from 1,012 homeowners who were over the age of 55, found that 41% of them intended to sell their current property. Of those who are planning to sell, 75% said they would like to downsize into a smaller property than the one they currently occupy.

Many homeowners among this group said that they were hoping that downsizing would enable them to free up, cash, which would average £87,600. As a ballpark figure, this suggests that many of them would be looking to move into properties that would be worth around £150,000 less than the one they would be selling (the cost of moving is generally reckoned to be around £50,000), with the amount they could realise being eroded by taxes, moving costs and so on.

The motivations for downsizing among this group paint an interesting picture of their circumstances. For many, having too much space appears to be a big concern: the top two reasons given for wanting to downsize consisted of having too much space (61%) and the convenience of running a smaller home (58%). Money appears to be a secondary motivation: 34% said they wanted to access equity and 22% said they wanted to reduce the running costs that came with owning a large home. The fifth most popular reason for wanting to downsize, cited by 21% of this group, was changes in personal circumstances such as ill health or divorce – which suggests that life doesn’t necessarily become any more predictable as you get older.

What they plan to do with the money is also interesting. Almost half (45%) said they want the money to fund luxury purchases, such as holidays, which suggests that members of this group are financially secure. However, clearly not everyone is so fortunate: 48% said they wanted to use the money to make investments, and 40% claimed they needed the money to boost their pension pots.

Taken altogether, these findings paint a picture of a generation of older homeowners who know they are sitting on top of an incredibly valuable asset, and who need or want to realise some of its value now, before it gets too late and they risk being stuck in a large property which becomes unmanageable when they get older.

Can we up-scale downsizing?

British homeowners have traditionally shown reluctance to leave the homes where they raised their families as they grow older and become “empty-nesters”, especially compared to countries like the USA where downsizing (often into purpose-built retirement communities in southern “Sun Belt” states such as Florida and Arizona) is much more of an established social norm.

Although this is only a small survey, any shift in older peoples’ preferences towards downsizing is to be welcomed and encouraged, given the amount of housing that it could free-up for younger families to move into. If trends observed in this survey held true for the population as a whole, as many as 2.5 million over-55s could potentially be interested in downsizing.

This should help to achieve a more efficient allocation of the space inside Britain’s homes, where previous IF research has suggested as many as 25 million privately-owned bedrooms may regularly go unoccupied, largely because of older empty-nesters who still occupy large family homes once their children have moved out. IF has argued that a government-backed downsizing agency would be useful to help older people who want to downsize negotiate the moving process.

Of course, there is a downside to all of this: a shift towards downsizing can only be achieved through young families burdening themselves with record levels of mortgage debt, which they will need to spend decades paying off. In so doing they will effectively be subsidising or wholly funding the retirements of the downsizers. However, given the nature of the housing crisis in Britain, it looks like that may simply be a price they have to pay.