IF volunteer Connor McCarthy reports on how attitudes and concerns from older generations have restricted the freedom of playing outdoors for many young people, and explains the impacts this is having on them 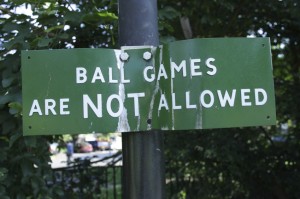 Britain’s children are playing outside less. In a survey of 2000 children aged 8-12 for TV channel Eden, 64% claimed they played outside less than once a week. A survey for Mothercare also found that the majority of parents believed that their children play outside less than they did. This sharp change in patterns of play is often attributed to the rise of the ‘digital age’, where it is claimed that children simply prefer to stay indoors, watching TV and surfing the Internet.

Play England found that 72% of parents preferred to play outside when they were children, whereas just 40% of today’s children would swap time in front of the TV or computer for time playing outside.

Furthermore, NHS figures suggest that more children were admitted to hospital last year for falling out of their beds than falling out of trees, so perhaps this young generation is simply lazier? Or are other factors converging to deter young people from outside play?

Outdoor spaces are being increasingly controlled, especially spaces where young people might roam. The common sight of a ‘No Ball Games’ sign is particularly synonymous with this constraint. When young people play outside, it is often seen as a nuisance, resulting in the demand for outdoor space to be increasingly restricted and monitored.

As a consequence, young people are forced to go elsewhere to play, often in unsafe locations such as wasteland or in the road; some simply do not play outside at all.

These restrictions could almost be seen as a metaphor for how the demands of one generation are being prioritised over the other. Signs like ‘No Ball Games’ embed the idea that the freedoms of young people are often disruptive and undesirable to older generations, and so must be officially restricted. Frequently based on unfair assumptions, such generational inequalities can cause lasting resentment.

Play is not only being restricted, but is also often actively discouraged by parents and older generations. Play England found that 53% of parents did not let their kids play outside due to worries about traffic.

Additionally, 40% of parents claim that “stranger danger” is the key issue. In fact, 43% of adults suggested that children should not play unsupervised before the age of 14, according to the TV channel Eden.

Yet many of these fears are exaggerated. A survey of parents for ITV’s Tonight programme found that 43% believed that violent offences and traffic accidents had increased dramatically between 1995 and 2014; in fact, they had decreased.

Similarly, parents also believed that the number of children kidnapped and killed recently would be far higher than 30 years ago, with 30% believing that 106 or more children had been abducted in 2012-13. In fact, it has remained the same, with an average of just eight cases reported per year.

So, the fears cited for restricting children’s outside play have been shown to be relatively unfounded. Nonetheless, such warped perceptions of concerns are having detrimental impacts on young people.

Play England also found that 28% of parents claim that intolerant neighbours make them reluctant to let their children play outside, and 32% believe that allowing their children to play ball games or make noise outside would cause problems with neighbours.

These stigmatising attitudes towards young people can have damaging long-term effects on youth, and can be seen as intergenerationally unfair. Lesli Godfrey, Strategic Lead for Playwork and the Children’s Workforce at SkillsActive, described how, as a child growing up in the Newcastle-upon-Tyne in the 1950s, she “played out” freely every evening, with little restriction on her or her friends’ playing freedom, unlike the generation of today: “The world is a different place now – neighbours used to keep a friendly, informal eye on children in their streets, [and] playing out was a natural and frequent occurrence which people didn’t seem to mind.”

Moreover, young people are being increasingly pressurised to spend their time in a more constructive way, such as taking part in more structured activities after school. Parents are also pushing their children academically considerably more, with a report by the Association of Teachers and Lecturers claiming children work for a total of 10 hours a day, resulting in the creation a culture of ‘overwork that turns children into ghosts’.

One of the most commonly cited outcomes of the restrictions to outside play is childhood obesity. According to the most recent figures from the National Child Measurement Programme, just over 33% of 11 year olds, and 22% of 5 year olds are now overweight or obese.

Increased unsupervised and unstructured outdoor play will not only help to reduce these statistics, but it has been found to have a range of other positive impacts on development. According to the University of Essex, playing freely outside can help to improve learning ability, creativity, mental and emotional wellbeing, and even self-esteem. Overall, University College London found children grew up to be healthier and more sociable if they regularly played outside unsupervised.

Older generations had the chance to play and develop freely outside. To younger generations of today, this idea now almost seems a privilege. Denying young people the basic freedom to play outside on account of the often-misguided worries and attitudes of older generations is clearly having hugely adverse effects.

The growth of technology has made it attractive to children to simply stay indoors, but they are not solely to blame if they take up the opportunity to do so. Negative adult attitudes, stressful time-demands and parental concerns are also contributing to increasingly restricted outdoor play.

A number of initiatives could be undertaken to counteract this trend. More could be done to help reduce the concerns of parents, which, although understandable, are often unfounded. Local councils should provide more safe spaces for play – but this may require imaginative solutions.

Many people do not live near areas where parks or safe play areas can be established; as a result, one idea that is gaining momentum is the launch of ‘Play Streets’, where roads are closed to traffic for three hours a week to allow children to play outside. Over 50 such schemes are currently in place in Bristol.

The freedom of children should be fairly tolerated and respected, rather than being restricted. Failure to do so could inhibit the development of an entire generation.