The sweeping victory achieved by Narenda Modi and his Bharatiya Janata Party in India’s general election shows what can happen when a political party successfully galvanises young people to argue for change. Could this have lessons for the UK? 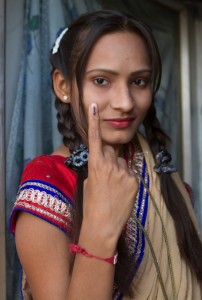 India’s recent general election was monumental in every sense. Widely regarded as the largest election ever staged, it involved an electorate consisting of more than 814 million eligible voters and took over a month to complete.

The result was a resounding victory for the opposition Bharatiya Janata Party, and their popular leader Narendra Modi. Some commentators have interpreted this as a significant victory for the youth of India, who are making their voices heard in Indian politics after years of disappointing economic growth and declining opportunities for young people. Although the demographics of India and the UK are very different, this shows the striking impact that young people can have when they are galvanised by politics to be a force for change on the issues that they care about.

The first thing you need to understand about India is that it is an astonishingly youthful country. Roughly half of its 1.2 billion people are under the age of 26; between the previous general election, in 2009, and the 2014 edition roughly 100 million new voters have been added to the electorate. The young should clearly be a powerful force in any democracy with demographics like this.

As a recent report in The Economist emphasised, the subject that most energises these young India voters is jobs. With so many young people coming of age each year, India’s economy would need to create vast numbers of jobs just for levels of employment to stand still; it has repeatedly failed to do so over recent years. Economic growth has been stuck below 5% in 2012 and 2013, compared to a boom period in the early 2000s when it regularly hit double figures, while food prices and unemployment have been rising.

Today’s young Indians are sometimes referred to as the “born frees”, a reference to the fact that they were born after a wave of sweeping economic reforms, enacted in the early 1990s, which liberated India’s economy and ushered in this period of high growth. Allied with the march of globalisation, this lifted millions of Indians out of poverty and gave them their first taste of prosperity through enabling them to own their own homes, their own cars, to access the benefits of modern technology and so on. The fact that not everyone has been able to reap the rewards of growth over recent years has spread disenchantment with the ruling Indian National Congress Party among young Indians.

This has been exacerbated by the fact that the Congress Prime Minister, Manmohan Singh, at the age of 81, is one of the world’s oldest serving elected leaders, and appears to be viewed as a rather ineffective, out-of-touch figure by many young Indians who has been marginalised by the members of the powerful Nehru-Gandhi dynasty, who are widely viewed to wield the real power within the party.

Sensing that young Indians were especially hungry for change, Narendra Modi’s electoral strategy targeted them with a campaign which focussed on the need to generate jobs and growth. His main selling point was that he had enjoyed a successful period as the chief minister of Gujarat state which boosted jobs and investment (although Mr Modi, a Hindu nationalist, has also been accused of abetting sectarian riots in 2002, charges which he denies). His campaign strategy cleverly focussed on using modern media channels, including mass text-messaging campaigns and social networks, to appeal especially to young, urban Indians.

The need to create millions of new jobs for India’s youth seems to have been one of the defining messages of the 2014 election campaign. As one political advisor whom The Economist quoted put it:

“An earlier generation was content to be ruled and lorded over. Young Indians now expect more. Ambitions have grown non-linearly, but our system, our structure has not kept up. People are no longer content.”

Lessons for the UK?

At first glance, India’s election appears to have little relevance to the current situation in Britain, given the extraordinary differences in demographics between the two countries. While India is struggling to work out how to accommodate millions of young workers in their economy, Britain is readying itself for a “silver tsunami” as the population ages rapidly over the coming years.

Yet there is an important lesson in India’s election for Britain’s politicians. Narendra Modi, managed to revive the fortunes of his party by energising young people through offering them a positive, hopeful vision of a more prosperous future.

By contrast, the mood surrounding the next elections to take place in the UK, the European elections on May 22, appears to be dominated by a climate of negativity and fear, with much popular rhetoric about the dangers posed by the European Union and immigration. This is partly due to the nature of the electorate: turnout for European elections is usually low and dominated by older voters, who evidence shows are significantly more likely to be eurosceptic than their younger counterparts; YouGov data suggests that more than 70% of UKIP supporters are over 50, with just 17% under 40.

If the dominant story in British politics at the moment seems to be the rise of UKIP and the other parties’ efforts to woo their supporters, then this is largely a question of competing to win older voters. Younger members of the electorate have been relegated to an afterthought, re-enforcing the sense of disconnection which feeds low levels of turnout; evidence submitted to the public inquiry into voter engagement in the UK which is currently being undertaken by the House of Commons Political and Constitutionals Reform Select Committee has shown that Britain has one of the biggest gaps of any European country between the electoral turnout of young and old.

In the long run, this cannot be healthy for Britain’s democracy. Although our demographics are very different from India’s, there is potentially a great prize on offer for politicians who can galvanise young voters by offering them a positive vision of the future – that they communicate to them using technology they are familiar with – as Narendra Modi and his party have shown.