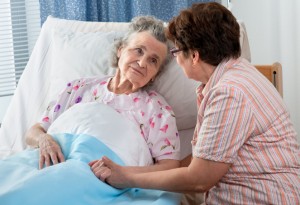 How should we fund the NHS in the face of rising demand and shrinking government budgets? One new proposal has recently come from the free-market think tank Reform, who have recommended that one of the necessary changes will be putting intergenerational fairness at the heart of the redesigned system.

Reform’s report, entitled Solving the NHS care and cash crisis, has been written by a pair of public health experts: Lord Warner, the former Minister for Health Reform under Tony Blair, and Jack O’Sullivan, an international expert in health and social care who runs a global consultancy which promotes new strategies for running public healthcare systems.

The centrepiece of their reforms would be transforming the NHS into a new “National Health and Care Service”, which would place a much greater emphasis upon preemptive care and long-term social care than the NHS does at present. The aim of these reforms would be to try to treat people before they become so ill that they need to visit a hospital, where care is expensive, and to try to prevent health crises among elderly people suffering from dementia and other chronic conditions that require day-to-day nursing care rather than medical treatment.

From the patient’s point of view, the biggest change under their new system would be that everyone would pay an annual £10 “membership fee” to their local NHS care centre, ideally alongside their Council Tax, and in return they would receive an annual “Health MOT” which would give them a plan for “co-produced health” over the following year.

The idea behind this would be to give individuals more of a stake in their own healthcare, treating them as partners who work alongside the professionals throughout their everyday lives to try and stay healthy, rather than simply calling on them during a crisis. The funding generated by the £10 membership fee would be ring-fenced and used exclusively to fund local healthcare services, to try to create a genuine sense of involvement between the citizen and the healthcare system.

The administrative side of the NHS – which most ordinary people are less familiar with – would also undergo a major reorganisation, so that the most complex, specialised care would be concentrated in a smaller number of sites (as has already happened to stroke care in London, for example), while large general hospitals would be reorganised as “hubs for integrated services”, blurring the rigid divides which currently exist between GPs’ surgeries, hospitals and care homes.

The funding and organisation of health and social care would be merged through the new Health and Wellbeing Boards which the current government has already created, giving these organisations overall responsibility (and funding) for promoting the general health of the population, organising healthcare services and providing social care.

Taken together, these sound like dramatic and far-reaching proposals. So how would the authors suggest we pay for them?

The authors argue that on current projections, the NHS will face a funding shortfall of between £30 to £50 billion a year by the end of the current decade. Therefore something has to give.

However, they argue that simply increasing taxpayer support for the system would be unfair, both because it starves other parts of the public sector of resources and because in practice it tends to transfer money from younger, less well-off taxpayers to older, wealthier patients.

As the authors argue:

“…[the NHS] also needs a broader funding base than general taxation, partly for intergenerational fairness, because the income tax element falls disproportionately on the younger working population even though the major users are the older population.”

They recommend that new fiscal discipline should be imposed by freezing the level of funding at the current rate in real terms (i.e. after inflation) throughout the lifetime of the next parliament. They would then generate additional funding through two new streams: firstly, through much more aggressive “sin” taxes on goods which are known to have a negative impact on health, such as alcohol and tobacco, and secondly, by transforming the rules surrounding inheritance tax so that more estates become eligible for it.

They argue that this would promote intergenerational fairness, as it would mainly take resources from the older generation, who are the primary users of healthcare:

“More widespread payment of inheritance tax…has the advantage of targeting more health revenue-raising on the greatest consumers of health and social care, namely older people, many of whom have benefited from a long-running housing boom, and reducing the burden on younger people.”

The social care element of their reforms, they argue, could be funded by introducing a new social care tax which would become payable in middle age, similar to the scheme launched by Japan a number of years ago. They also suggest passing more charges on to the users of healthcare services in a number of ways, most notably by charging people for the “hotel” costs of staying in NHS hospitals (a similar principle is widely used in other public healthcare systems around Europe).

Of course, whether the political will really exists to massively reform the NHS during the next parliament is certainly open to question. Passing more costs on to users is never likely to go down well with voters, especially older ones, who will be conscious that they would be the biggest losers under such an arrangement.

Nevertheless, Reform’s report is another interesting contribution to the debate surrounding how Britain will afford to pay for the NHS as our population ages.