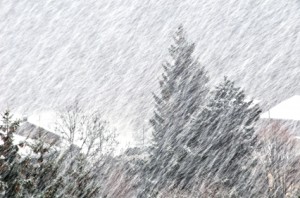 The government currently spends a very large amount of money each year on trying to keep peoples’ homes warm during winter, much of which goes to pensioners as older people are particularly at risk from the cold. A range of different benefit payments exist specifically to help the elderly with their housing costs, including the winter fuel allowance (which is paid to all pensioner households regardless of need), cold weather payments and the Warm Home Discount Scheme.

Part of the justification for these policies is that the number of deaths tends to rise during winter – so-called “excess winter mortality” – and it seems to make sense intuitively that being poor (particularly being in “fuel poverty”, a term whose definition has controversially been changed by the current government) would increase your level of risk from the cold if it constrains your ability to put the central heating on. Therefore, subsidising heating costs through the welfare state ought to reduce the level of excess winter mortality.

In theory this all makes sense – or does it? In fact, new research from the BBC suggests that the relationship between fuel poverty and excess winter deaths might not be as straightforward as it appears to be…

Not all winters are equally cold

The BBC recently published an article on its website in which the author attempted to explain why the first full week in January each year is traditionally the seven day stretch that contains the highest number of deaths. He presented evidence which shows that there is a definite upsurge in the number of deaths during this week compared to the rest of the winter months.

Data covering the period between 2008 and 2013 shows that the average number of deaths recorded per day in England and Wales rises by about 11% during December and January above the annual average. In total, excess winter mortality typically accounts for between 25,000 and 30,000 extra deaths each year.

However, this number fluctuates by a considerable margin each winter. For example, last winter (2012–13), the number was 29% higher than it had been the winter before that. You might think that this was because last winter was especially cold (March 2013 was one of the coldest on record) – yet the author points out that the winter of 2009–10 was even colder than that, but the number of excess winter deaths didn’t show a corresponding level of increase.

In fact, according to Claudia Wells, head of mortality analysis at the ONS:

“If we look at Scandinavian countries, which generally have much, much colder winters than we do, the number of excess deaths in those countries is much lower…but if you look at warmer countries, like Portugal and Spain, their excess deaths are much higher.”

Remarkably, the data also suggests that a person’s risk of falling victim to the cold weather is not affected by how wealthy they are. Claudia Wells said the following:

“When you look at all-cause mortality you see a very clear correlation between the deprivation in an area and the mortality rate. You don’t see that when you look at excess deaths…we know that people in Kensington and Chelsea have a higher life expectancy than those living in Glasgow but there is no north-south divide for excess winter deaths.”

Geographical evidence analysed by the BBC seems to confirm this finding:

“…the county with the highest levels of excess winter mortality in 2012 was relatively affluent West Sussex, where 48.3% more deaths occurred during winter than the rest of the year. By contrast, there were no excess winter deaths that year in Ceredigion where one in five people are in fuel poverty.”

These surprising findings call into the question the entire rationale for using the welfare state to subsidize older households’ heating costs. So what is going on?

Last year, news that the winter of 2012/13 witnessed a spike in excess winter mortality to 31,000 led to a number of calls in the media for anti-fuel poverty measures to receive more funding. Dot Gibson, national secretary of the National Pensioners Convention had the following remarks quoted by the Daily Telegraph:

“How can colder Scandinavian countries avoid this annual toll while we simply wring our hands? The Government needs to roll out a more effective programme to insulate homes, build more sustainable properties for older people, raise the winter fuel allowance and tackle the excessive profits of the Big Six energy companies.”

A spokesman for the Prime Minister, David Cameron, also responded to the news by emphasising the additional resources which his government have allocated towards helping older people deal with the impacts of cold weather:

Both Dot Gibson and David Cameron appear to be arguing that excess winter mortality is at heart a problem caused by households being unable to keep their homes warm at winter, implicitly implicating fuel poverty as the culprit.

The problem is that the BBC figures suggest that excess winter mortality is much more complicated than this, and we simply don’t know enough about its causes for it to be used to justify spending millions of pounds helping older households with their heating costs at the expense of the many other demands which weigh heavily on the public purse (not to mention that the design of the winter fuel allowance, in particular, is flawed, as all pensioner households receive it regardless of their level of need).

Redesigning the government’s package of cold weather benefits would release large amounts of additional resources that could be put towards better long-term policies, such as insulating Britain’s housing stock or even raising the basic state pension. What the government really needs to do is to devote more resources to pinpointing the real factors which exacerbate winter mortality, so that policy initiatives can be better-targeted to address them.