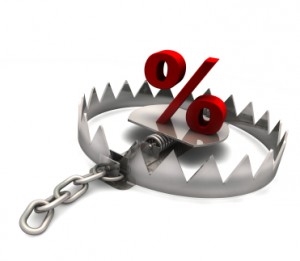 Younger households are particularly at risk of being burdened with “perilous” levels of debts when interest rates rise from today’s historic lows, according to a new report from think tank The Resolution Foundation.

Their report, which modelled the likely impact on British households if interest rates were to increase under a range of different scenarios, found that the number of households who have to spend more than half of their disposable income on debt repayments could double to 1.1 million by 2018 if interest rates rise to 3%.

The Resolution Foundation also analysed the distributional impact of rising interest rates on different types of household, and found that younger households were especially at risk because of high levels of mortgage debt, which many of them have been overburdened with because of Britain’s high house prices.

The Resolution Foundation defined households as being in “perilous” levels of debt when they have to spend more than half of their disposable income on debt repayments. The report found that there are currently around 600,000 UK households in this position, but they project that this number could hit 1.1 million if interest rates rise to 3% and could even reach 2 million if they are increased to 5%.

The Bank of England base rate is currently being held at a historic low of 0.5%, in order to try and stimulate the economy by making borrowing cheaper. However, the Bank of England faces increasing political pressure to raise interest rates, particularly from savers’ groups, who have been hit hard by the poor returns which they get on their money.

One section of the report examined the consequences of higher interest rates on household debt levels by age, and found that households headed by younger people would be among the biggest losers if interest rates were to rise.

As things stand at present, younger households which have high levels of debt have done relatively well from the prolonged period of low interest rates. This is reflected in data produced by the Resolution Foundation, which shows that households headed by people under the age of 35 account for just 12% of those with perilous levels of debt. The remainder are divided almost evenly between households aged 35–50 and those aged 50+.

However, the modelling used in the report shows that these under-35 households would account for 20% of all perilous borrowers in 2018 if the base rate rises to 2.5% and average households enjoy good income growth, while they will account for 21% under a scenario where average income growth remains stagnant. The report’s authors summarised their findings as follows:

“…while the absolute numbers in ‘debt peril’ would increase across all ages under scenarios three and six [the two scenarios described above], as a share of the total, the biggest increases would occur among households headed by younger (under 35) individuals. This may be because much of the money pouring into housing in the first half of the 2000s was being transferred from buyers (younger households taking out mortgage debt) to sellers (older households downsizing for retirement).”

Can we afford to raise interest rates?

This stark warning from the Resolution Foundation echoes similar sentiments that were expressed by Sir Mervyn King, the former Governor of the Bank of England, during his final public appearance in that role.

Addressing the Treasury Select Committee on 1 July 2013, he argued that the older generation was largely responsible for the high levels of debt among younger households:

King went on to claim that this meant it was fair for older savers to be hit by a prolonged period of low interest rates if this benefited heavily-indebted younger households, as they had been the major beneficiaries of them getting into such high levels of debt in the first place.

A report published by the Bank of England itself at around the same time that King made this speech argued that heavily-indebted younger households represented a systematic risk to the financial system. Altogether, UK lenders are owed the eye-watering sum of £1.4 trillion by UK households, much of it in the form of mortgages, and a large proportion of this could turn into bad debt if interest rates rise. Even if the financial system manages to avoid this fate, the Resolution Foundation warn in their report that higher interest rates would place a profound squeeze on the ability of perilously indebted households to spend money, which could seriously weaken the UK economy.

Clearly, higher interest rates would be a bad thing for many of Britain’s young home-owning families – but can the Bank of England resist the pressure to raise them for too much longer?