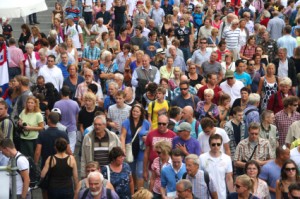 Recently, the Office for National Statistics (ONS) released new data which showed how average life expectancy has continued to rise in Britain. On 6 November, they followed that up by publishing their latest set of population projections, which provide estimates of how they think Britain’s population is going to change over the next 25 years, based on data from 2012.

The full set of 2012-based population projections is available here:

They paint a worrying picture of the coming demographic crunch from ageing which Britain will face over the next few decades, as this blog will explain.

As you would expect given that average life expectancy has kept on increasing, Britain’s population is ageing. Between 2012 and 2037, the ONS expects around 9.5 million more people to be added to Britain’s population (taking it above 70 million), but they will not be evenly distributed between the different age groups.

In total, over 7 million of the extra 9.5 million people Britain is expected to gain will be above the age of 60, which is equivalent to adding another city the size of London consisting entirely of over-60s. Just the number of people aged over 100 is expected to rise to 111,000, which is roughly the size of Exeter.

One of the striking features of these projections is that all of the five year age cohorts which are above 65-69 are projected to increase in number by at least 25%; in contrast, none of the age cohorts below 65 will rise by more than 15%, with 10 of the 13 youngest age cohorts either rising by a single digit value or falling. As The Economist argued in its article on these projections, the most worrying statistic is that the number of people in the peak years of productivity (between 30 and 60) will rise by just 3%. By 2033 there will be 371 pensioners for every 1,000 people of working age, a figure which is 20% higher than the number today.

What will the politicians do?

Despite the huge challenge these demographic changes pose to our society, much of the media reaction to these figures has unfortunately concentrated on the role played by immigration in causing population increase.

This is a distraction from the much more serious issue of population ageing, although immigration is likely to play an important role in maintaining the size of our workforce. One of the assumptions the ONS made in preparing these figures was that net immigration will remain broadly stable at around 165,000 per year between 2012 and 2037; because immigrants are mostly people of working-age, there is no doubt that – whether you are in favour of immigration or against it – Britain’s dependency ratio will start to look worse if immigration falls below this level.

Of course, the outlook could also be better than the ONS has projected if immigration proceeds at a higher level than this, but looking at the politics of our current debates about immigration, a fall in the number of new arrivals looks much more likely than a rise (especially if Britain opts to exit the EU in 2017, which presumably would curtail the free movement of workers from other EU states).

Given the demographic challenge which lies ahead, it is extremely disappointing that the Coalition Government has declined to publish a green paper outlining their response to the recent report published by the House of Lords Committee on Public Service and Demographic Change entitled Ready for Ageing?. This report emphasized the scale of the challenge facing Britain’s public services as our population ages, especially the thorny issues of paying for healthcare and pensions, and while there are clearly no easy solutions, publishing a green paper would have been a positive statement of intent from the Government that it is serious about tackling them. The longer our politicians wait before they take action, the fewer the options they will have when they finally decide to do something.