The Fire Brigades Union, as well as two of Britain’s largest teachers’ unions, have recently announced further strikes in the months ahead. With public sector pensions once again becoming increasingly prominent in the national media, David Kingman provides a reminder of the issues which are at stake 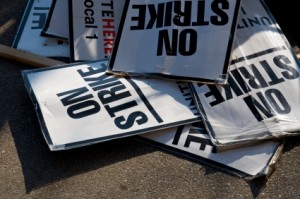 On 14 September, the Fire Brigades Union publicly announced that strikes over pensions appear “unavoidable”. Nine days before that, two of the largest teachers’ unions, the National Union of Teachers (NUT) and the National Association of Schoolmasters Union of Women Teachers (NASUWT), announced that they would take industrial action during the run-up to Christmas if negotiation was unable to resolve disputes over pay, pensions and workloads.

For many people who have been following the government’s gradual attempts to reform public sector pensions, they would have hoped that the disputes would be coming to an end by now. However, the prospect of further strikes suggests that there are still issues to be ironed out, and that the challenge of reforming public sector pensions will drag on towards the next election.

What are the teachers and firefighters complaining about?

Pensions are one of the key issues over which all three of these unions are threatening to strike. The Fire Brigades Union is still actually continuing to use one of the most popular slogans created by the anti-reform movement in response to the government’s proposed changes to public sector pensions when this first became a major issue in late 2011 –according to its website: “The government wants firefighters and other public sector workers to pay more, work longer and still get less for our pensions.”

This slogan of “pay more, work longer and get less” has been invoked repeatedly by public sector trade unions over the last few years as a neat means of summarising their objections to the proposed reforms. Announced in 2011 after months of negotiation between the government and unions, the reforms to public sector pension schemes mainly involve public sector workers having to work until higher retirement ages (these will now be indexed to increases in the state pension age for the members of most of the main schemes), in addition to paying higher employee contributions and switching from a “final salary” to a “career average” method of calculating their final pension amount.

Many of the public sector schemes have also undergone a shift from using RPI as the measure of inflation by which pensions in payment are up-rated each year to using CPI, which tends to be lower, making the pension benefits former workers will receive less generous over time. Most of these changes are due to come into effect by 2015, although some are being phased in a year earlier, in 2014 – so some of the unions may feel that now might be the best time to begin agitating for more favourable deals for their members.

Why have public sector pensions been reformed?

As public sector workers are now enjoying longer retirements than ever before, this means that the cost of funding these schemes was likely to balloon over the coming years under the old arrangements. This was unfair to the future generations of taxpayers who would have had to fund these pensions, as they had no say in signing the deals between the government and trade unions which led to them in the first place.

These reforms were also designed to address a different unfairness, specifically that public sector workers are still able to access the kind of generous final salary pensions which have virtually disappeared in the private sector. Instead, most private sector workers have to build up their own investment funds in order to buy a pension income under the “defined contribution” model, which is much less reliable and tends to be less generous, on average. As it is the taxes on private sector workers which largely pay for government pensions, this had led to resentment over what some critics had dubbed “gold-plated” pension arrangements in the public sector, which helped to create a groundswell of support for these reforms.

The government commissioned Lord Hutton to chair an independent enquiry into the future funding of public sector pensions, which reported its findings in March 2011. This led to the final package of reforms which were mentioned above, after several rounds of negotiations and a number of public sector strikes. However, the issue now appears to be heating up again.

Are the new arrangements intergenerationally fair?

Partly in order to obtain the support of senior members of these trade unions, the government accepted that workers who are already over the age of 50 should have their existing final salary pension rights exempted and should not be switched to the career average method of calculating pensions. This is intergenerationally unfair within the public sector itself, because it means that new and younger workers have to accept higher contributions in order to help fund the pensions of their more senior colleagues. This is one of several aspects of the new reforms which show that the reforms are far from complete, and it is very likely that the issue of public sector pensions will become increasingly prominent again over the remainder of the current parliament.

To find out more about the situation surrounding public sector pensions, you can read IF’s  research report, Are government pensions unfair on younger generations?