The national debt is a major intergenerational issue. Matt Hitchens examines its transition from an (oft-plundered) war-chest to a fund feeding current expenditure 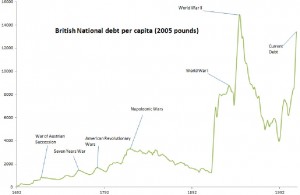 “Blessed are the young, for they shall inherit the national debt” – Herbert Hoover, 1936

It is difficult to have a discussion about the UK economy, or indeed about the economy of any developed nation, without the conversation swiftly turning to the topic of the national debt. The coalition agreement, from 2010, stated that “the most urgent task facing this coalition is to tackle our record debts”, and almost all politicians, and political commentators, agree that the national debt is a problem that needs tackling head-on. But why?

The obvious economic answer is that, since the recession, bond markets (from which governments borrow their money) have become much more conservative about risk, and therefore are less willing to lend to those countries whose level of debt looks unsustainable. High debt, which looks out of control, tends to mean high interest rates, which in turn mean additional costs for the general taxpayer. But there are deeper problems with the idea of a large national debt: questions abound over what the debt should be used to pay for, and what it shouldn’t.

The Origins of Debt

Britain (though it was, strictly speaking, England at the time) has had a national debt since 1692, when the Bank of England was founded. Until that point, kings and queens had simply raised taxes in order to finance their expenditure, particularly on warfare. But William of Orange, following the Glorious Revolution, was struggling to raise enough money to build the navy he desired. Several rich Londoners got together, decided to lend the money to the government, and the national debt was born.

However, it has not been a simple progression from William of Orange to David Cameron, each borrowing to suit their needs. For most of the lifetime of the Bank of England, money was only borrowed in order to pay for continental warfare – this provided the sole justification that 18th century statesmen saw as sufficient to borrow money against the future. Indeed, the above chart* (please click to zoom in) shows that throughout the 18th and 19th centuries, the national debt usually rose during wartime and fell during peacetime. (It’s worth emphasising that this chart only records the headline figure for the national debt, which doesn’t include the off-balance sheet liabilities that each government accumulates for pensions and other financial promises that it hands on to be paid in the future, which now amount to trillions of pounds in “hidden” debt – see this article).

Increasing the national debt was seen as an unavoidable consequence of going to war, which future generations (it was assumed) would be thankful to their predecessors for doing. Britain’s government in the 18th century was essentially a machine for going to war, with taxes and borrowing the tools they had to finance it – a “fiscal-military state”. When there was no continental war (as for long parts of the 19th century), government did its best to pay down its debts, in order to be ready for when then next war arose. Understandably, the two world wars in the first half of the 20th century caused the national debt to skyrocket, but again, when each war was over, the debt was reduced as subsequent governments began to try to pay back what their predecessors had borrowed. This month it emerged that in 1928 anonymous benefactors left £500,000 (£26m in today’s money) to try and help pay off the “entire national debt” – an indication of the contemporary British mindset.

The debt even continued to fall during the 1940s and 1950s, despite the costs of creating the welfare state – in part this was because of an inevitable drop in military spending after World War Two had finished, but it also occurred because the governments of the day still believed that the national debt was there to enable war to be waged at short notice, and that once war was over the debt should be repaid.  For more than 250 years, then, the national debt was used, almost exclusively, as a means of last resort for financing warfare.

This mindset completely changed in the second half of the twentieth century. For the first time in Britain’s history, the national debt began to rise (in the early 1980s) without any obvious conflict on the horizon (barring the relatively inexpensive Falklands War) and it has continued to do so (albeit was a slight drop in the mid 1990s) ever since, rising almost to 1945 levels. Moreover, the deficit (the difference between income and expenditure which dictates how much the government needs to borrow each year) shows little sign of being eliminated any time soon. Money has been borrowed to pay for services in the here and now, including education, pensions and the NHS, when before this would have been financed entirely from the tax intake (which will almost certainly need to rise). Today the government’s official national debt is estimated, very conservatively, at £1.2 trillion – or more than 3,000 times the current value of that hopeful 1928 donation.

What happened? It is certainly true that Mrs Thatcher introduced inflation-indexed bonds in 1981, which stopped government being able to inflate away its debt. Further, some might argue an “evolution of rising expectations” occurred, in which people started demanding better public services, which the national debt seemingly provided an easy method of financing. This could be viewed as part of a general trend towards increased consumerism, which meant people were more concerned with material gratification than with financial prudence. Arguably, a culture of individualism has emerged, in which people are less concerned about the welfare of the future and more about their own wellbeing. It could be all of the above. Whatever the cause, it is clear that the national debt somehow became, not a measure of last resort, but a key tool the government used for funding public services, and so it remains.

The morality of borrowing is an aspect often missed in this discussion – we (mostly) accept that borrowing for investment, when done correctly, is A Good Thing; but what about consumption? Do we have the right to consume and assume others will pay for it? In some cases perhaps; but it seems that, in the last thirty years at least, government borrowing has taken on a rather different character from its historical norm, and maybe now is the time to re-examine the role of the national debt in what we expect of government, for the sake of those who will, inevitably, have to pay it.

*Copyright for the chart goes to Christopher Chantrill. The original source can be found here.