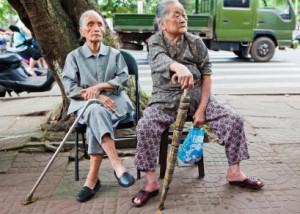 Here in the West, we’ve become accustomed to thinking about population ageing as a problem facing the developed countries of Japan, Europe and North America. Yet rising life expectancy and falling fertility means that a number of countries which are still at earlier stages of development are also beginning to feel the impacts of population ageing, which has become a particularly acute problem in China.

Since the late 1970s, China has pursued an economic model which was based on it becoming “the workshop of the world”; a strategy which revolved around exploiting its vast reserves of young workers to produce goods more cheaply than anywhere else could.

When concerns began to grow about the possible consequences of China’s rapidly expanding population, the government introduced its controversial one-child policy in 1978. This meant that most urban married couples were allowed to produce only a single offspring. (The regulations were not actually quite as draconian as is often depicted: some rural families, ethnic minorities and several other groups have always been exempt.)

Population growth has slowed down dramatically, but this was accompanied by rising life expectancy as the country grew richer, with the inevitable consequence of population ageing. Now, districts of some major cities such as Shanghai have more in common with the greying citadels of Europe and Japan than they do with the dynamic population powerhouses of the Third-World.

China: Too old to get rich?

The problems facing China as it ages were starkly illuminated by a recent edition of the documentary series Crossing Continents called China: Too Old to get Rich, which aired on BBC Radio 4.

The presenter, Mukul Devichand, visited Shanghai to see how the city is coping with ageing at first-hand, and emerged with an impression which differed sharply from the picture we often have of China as a land of gleaming industrial spires housing relentless hives of economic activity.

The Shanghai he discovered was a world where hundreds of elderly people live cramped together in tiny sub-divided flats, often only separated from their neighbours by makeshift barriers made out of tin and wood. The lack of lifts are a problem for the elderly: one woman he spoke to who lived on the eighth floor had to walk up and down the stairs to her apartment at least six times each day despite being in her 80s, while her husband had died after suffering a heart attack on that same staircase just two years before.

Dementia and other afflictions of old age remain little-acknowledged by wider society, while there is an astonishing shortage of social care. The government estimates that there are just 100,000 elderly care workers in China, despite official projections which suggest that 10 million would be closer to the number needed.

State-run nursing homes are so few and far between that they are massively over-subscribed, while fairly basic private ones are only just starting to appear (the presenter visited one in the backstreets of Shanghai which charges £200-300 per month to provide an elderly person with a bed in an eight-person dormitory). In one touching story that he managed to uncover, a 90 year-old woman was sharing the same room with her 71 year-old unmarried son.

Economic modernization has broken down the traditional system through which the elderly used to be looked after, by large families in which many generations lived under the same roof and all took care of each other, but the systems governing pensions and healthcare have not evolved enough to provide a sufficient alternative.

The one-child policy has also made it harder for today’s Chinese adults to look after their parents, even though the middle-classes are so much wealthier than would have seemed possible just a few decades ago. The typical Chinese family is now often described as having a 4-2-1 structure, with four living grandparents, two parents and one child. Providing adequately for four elderly adults is still beyond the means of most married couples in China, even if both of them work, while the costs of trying to do so may well place further downward-pressure on the birth rate, if couples don’t feel they can afford to have more children.

How Chinese society adapts to these dramatic social changes will be a key problem which it has to grapple with in the coming decades.

The second area of concern is economic. Many people are asking how China’s economy will cope with the gradual erosion of its main resource base – young workers. A factory owner who was interviewed for Crossing Continents complained that the cities are already starting to run short of labour because so many young people are now staying in the western interior of the country to care for their parents and young children, rather than accepting the risky, peripatetic lifestyle which comes with being a low-wage migrant worker. The Chinese economy is still driven by its factories, and if the cost of producing things in China rises then the country’s remarkable economic growth could just as quickly start to deflate.

The worry that China could start to go backwards economically because of its ageing population has led to the coining of a popular phrase; people now talk openly of China being “too old to get rich”. Given how many ordinary Chinese still live in poverty, and the extent to which the Communist regime relies upon its economic successes to provide legitimacy, that is surely a outcome which China can ill-afford to grapple with.