Rents are at the highest they have ever been, property prices continue to soar and young people and low- and middle-income workers also face a cost-of-living crisis. Simultaneously we are facing other crises ranging from the environment to mental health. Alec Haglund, IF Researcher, argues that by solving the housing crisis it would be possible to overcome many other urgent problems, as the housing crisis affects all aspects of our lives. 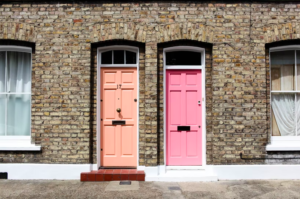 Solving the housing crisis in the UK should not be looked at in isolation as purely an issue of accommodation. Instead, taking a holistic view of the crisis, and its solutions, allows us to see that the housing crisis is causing problems far beyond the realm of affordable living.

Solutions to the crisis can help overcome issues ranging from climate breakdown, mental and physical health issues, public transport accessibility, to high energy bills and poverty. Solving the housing crisis in a holistic way could drastically improve the outlook for future generations.

Overcoming the housing crisis would reduce poverty and inequality

The housing crisis is also visible in the unacceptable number of people who are homeless. Not enough houses are being built, and since the almost complete erosion of the social housing stock which began with the implementation of the Right-to-Buy scheme, housing has become increasingly unaffordable for many. For approximately a quarter of a million people the housing crisis has led to homelessness, and almost half (46%) of those registered as homeless are under the age of 18.

Solutions to the homelessness crisis do exist. In Finland, the solution to homelessness is a simple but effective one – provide people with homes, unconditionally. At first glance this approach might seem radical or expensive, but the truth is that providing people with homes is much more cost-effective for society as a whole in comparison to the social costs of homelessness. In the case of Finland, studies showed that society saved as much as €15,000 for every properly housed and supported homeless person by avoiding healthcare, social and justice system costs associated with homelessness.

As rents are currently increasing year-on-year at 11.8% outside London, and 15% in London, providing genuinely affordable housing would help young people and those on low- and middle-incomes with a monthly expense that is as extortionate as it is unavoidable – we all need a place to call home.

Housing is a human right

Unlike other goods or services, overall demand for housing can be understood as relatively inelastic. Human beings require housing to survive and are therefore prepared to pay whatever is necessary to acquire a roof over one’s head.

Without implementing policy which recognises housing as a human right, this situation can be exploited by the profiteers in the property market who are able to extract ever-increasing amounts of young and low- and middle-income workers’ wages in rents. In fact, research suggests that the housing market is one of the largest drivers of the continually increasing wealth inequality across society, both intergenerationally and intragenerationally.

There are environmental benefits to solving the housing crisis

Too few of new UK homes are built in areas with good connection to public transport, which has knock-on effects of increased dependency on car ownership, less utilisation of cycling or public transport, longer commutes. All of these result in unnecessary negative environmental impacts, which could have been avoided through better planning of housing.

Building dense housing lowers the carbon footprint and simultaneously lowers energy bills because of the higher energy efficiency of dense housing. Additionally, it makes daily journeys more easily undertaken by either walking or cycling, and also improves economic productivity by allowing people to live closer to the places where they work, shop and socialise.

The health effects of green and dense affordable housing

Communities that are built for people, with green spaces, public transport access, affordable rents and lively public spaces create happier communities. The mental health crisis in the UK continues to affect more and more people, and although the crisis goes beyond housing and the built environment there is certainly room for improving mental health through human-centred planning and truly affordable housing.

Dense housing does not have to mean cramped, small living spaces. In fact, building more dense housing provides an opportunity to build more floor space in the same area than what would be possible to achieve with only two-story buildings, without needing to resort to building overly imposing and alienating skyscrapers. Parts of Bloomsbury in Central London, for example, would be considered “dense” but still leafy, calm and boasting plenty of parks and squares. This type of urban planning is the norm in many French and Spanish cities.

Building denser housing planned around human needs can incentivise walking and cycling, which has positive physical and mental health effects. In addition to the direct health impacts, it would also lower the social cost of health treatment, and therefore have economic benefits by reducing the social health cost.

A question of priorities

A city or a neighbourhood based around walking and cycling can increase a sense of community by allowing people to connect with one another more easily, creating opportunities to reduce social alienation and build more friendships and acquaintances across generations, classes and ethnicities. In comparison to private rentals, social housing tenancies are often more secure and long-term, which makes it possible to build a stronger sense of community and belonging in the area one calls home.

Solving the housing crisis would overcome a range of issues the UK is now facing. In a similar sense to how economists talk about the multiplier effect of government spending, the positive impacts of human-centred housing and urban planning are immeasurable. It is possible to solve the housing crisis and all the issues connected to the lack of genuinely affordable, energy efficient, integrated and well-connected housing. It is all a question of priorities.

Photo by Gleren Meneghin from Unsplash