Thomas Walker is the Economist-in-Residence at Think Forward. Think Forward is an advocacy group for young Australians who want to see issues of intergenerational fairness front and center in Australian policymaking. In this article for IF’s Worldwide Blog Week, Thomas argues that a parliamentary inquiry would reap great benefits for younger generations in Australia. 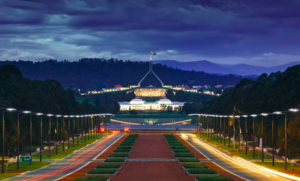 A quality education. A stable and well-paid career. Buying a home. Starting a family. Building up wealth for retirement.

These are life stages familiar to generations prior that Australia’s young people today are fearful they may not experience. What’s more, these fears are well-founded, says the 2021 Intergenerational Report, which found that Australia’s millennial generation is shaping up to be the first generation since federation to have worse economic outcomes than the generation before.

Young Australians have a lot to be thankful for – from living in an OECD country to our political stability. Likewise, youth isn’t necessarily proof of hardship. Older women, for example, are the fastest-growing cohort of homeless people in Australia.

Despite this economists, actuaries and even Federal Treasury, can point to evidence that shows the way government uses the tax system and spends money is biased against young people and fails to consider the generational impacts of policy.

The 2021 Intergenerational Report lays bare the breaking of the intergenerational bargain. It details the vast debt levels over the next 40 years that young Australians will be tasked with repaying, a less productive economy meaning that the chance of growth overtaking debt is reduced, and an older population requiring increasing expenditure on health and aged services.

Australia should absolutely offer excellent health and aged care services and a pension that affords a decent standard of living. But it is clear to see the ongoing failure to make proper provision for the increasing aged-care costs for the sizeable post-war cohort, who will rely on a smaller cohort of younger generations to pay for the ongoing funding.

At the same time as spending on health and aged pensions are increasing through population aging, we have been cutting taxes for the beneficiaries, by providing benefits like tax-free superannuation income in retirement, refundable franking credits, and negative gearing. The government today conducts spending in a damaging short-term approach focused on “pork barreling” the older vote. Budget policies have not yet caught up with reality detailed in the Intergenerational Report.

It’s resulted in a situation where working-age Australians are underwriting the living standards of older Australians to a much greater extent than the Baby Boomers or earlier generations did for their forebears.

Accounting for inflation, in the 80s and 90s, an average elderly household (65+ years) received $16,497 per annum in support from taxpayers. Today that figure is 65 per cent higher at $27,301, even though superannuation was introduced to reduce the financial burden of retirement on working taxpayers. Working-age households have always paid more in taxes to support the elderly, but the sheer size of these transfers today exacerbates the costs of an ageing population, leaving younger Australians to carry the burden. Even wealthy retirees can use the tax breaks offered to receive more from the government than they contribute.

One argument sometimes advanced to defend age-based tax breaks is that older Australians have ‘paid their taxes’. The implication is that they paid enough tax over their working life to check out of the tax system for their final decades. But given the size of the retiring cohort, this can only be sustained by pushing a growing tax burden onto younger Australians, an unjust outcome. Older Australians have undoubtedly worked hard and deserve a great retirement, but most of the windfall benefit experienced by older generations is purely down to luck and age and when they happened to buy property and other assets. The millennial generation have no such luck.

The Intergenerational Report assesses the long-term sustainability of current Government policies and how changes to Australia’s population size and age profile may impact economic growth, workforce and public finances over the next 40 years. However, it offers no policy solutions or plan for how we should address the problems it identifies. Think Forward believes young Australians need bold reforms in our tax and transfer system to address long-standing intergenerational inequalities.

Think Forward, on behalf of a coalition of youth organisations including the Foundation for Young Australians, Youth Action, Youth Development Australia, YACVic and Youth Affairs Councils from several states, calls for an inquiry to start the conversation. The inquiry needs to explore the tax and spending structure that is sustainable for a 21st Century Australia that would improve the economic outcomes for young Australians.

A similar inquiry has been successfully run in the United Kingdom. The inquiry confirmed an endemic failure of successive governments who failed to consider longer-term policy consequences resulting in the undermining of intergenerational fairness, including for generations yet to be born.

Issues identified a failure to ensure a sufficient supply of affordable homes to buy and to rent, an education and training system that is ill-equipped for the needs of the rapidly changing labour market, the halting of the generation on generation income gains, increasingly insecure employment and a lack of workplace rights, and a failure to make proper provision for the costs of social care in old age for the large post-war cohort who will rely on smaller, younger generations to pay for them.

An Intergenerational Plan, much more nuanced and well-thought-out than the five-yearly Intergenerational Reports, should also be a priority for the nation. We also want an intergenerational lens placed on all new government spending and taxation settings. Other countries already do this. For example, Wales has a Future Generations Commissioner, or other nations use youth councils or chambers to directly review policy.

Australia has just elected a new government. Now is time to reimagine the future of Australia and consider how it looks for all Australians, not just the demographic with electoral weight. We need to revert course, so Australia’s millennial generation does not actually have worse economic outcomes than the generation before. Helping the next generation doesn’t mean leaving the kids a huge inheritance. The best legacy the baby boomer generation can leave is support for tax reform and an inquiry into intergenerational fairness.

Photo by Social Estate on Unsplash