The American political system is gridlocked and its democratic norms are shaken. In the second of two articles for IF’s Worldwide Blog Week on renewing the legal and political institutions of the United States, Julia M. Puaschunder, an economist and psychologist at ​​Inter-University Consortium of New York, considers the history of the lottery system in politics, and asks if reviving and expanding the role of democratic rotation could help to solve some of the nation’s problems. 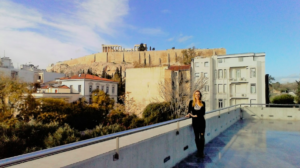 Back to the Acropolis

Since the beginnings of democracy, the lottery system has become a hallmark of shared collective decision making. The democratic rotation became the starkest form of organised direct democracy during the golden ages of the Athenian democracy, as early as the 5th to the 4th centuries BC. In the lottery system, a rotation of about a quarter to a third of male Athenian citizens above 30 years of age became part of the government.

Eligible citizens thereby acted as aid of the community – for a short time – on state affairs and judicial decision making. Civilians were put into power for a part of the year for the Senate and for a month to become members of the executive branch.

As any and every citizen could be drawn by the lottery, this democratic act attributed all sorts of people the responsibilities within the Senate, composed by representatives of the population. Senate representatives who were chosen by lottery were only allowed to be active once for a month and the head of the Senate was only in charge for a day.

The Senate was the institution within the Athenian democracy that divided legislative, executive and judicial powers. Rotation of positions ensured that individuals were not repeated and that everyone had an equal chance in terms of political participation. In all these features, the lottery system granted hope to all eligible citizens of true and meaningful participation in the collective decision-making within the democratic process.

Lottery through the ages

Lottery and direct democracy through a General Assembly and a people’s jury – as well as diverted political, judiciary and military rotation of power – helped other powerful ancient and modern democracies to breed social harmony and civic participation in fostering collective decision making.

Athens, Rome, Venice, Florence, Spain and even China relied at some point on lottery systems. In the Roman Empire and Florence under the Medici during the 13th and 14th centuries but also in early Spain, lottery was used to evade disputes and breed social cohesion. Florence enacted a highly sophisticated draft to influential public offices based on the credibility, tax contribution and abstinence of crime of its citizens. Switzerland had lottery drafts until as late as the 1800s.

The lottery system in America

In pre-revolutionary America, Massachusetts, New York, Connecticut, and New Hampshire had some kind of lottery draft between 1736 and 1758. Some of these even lasted beyond the American Revolutionary War: New Jersey and Maryland employed lottery systems between 1776 and 1800.

The values conveyed in the idea of direct democracy – including participation and rule by all – inspired revolutions, such as the ones of France and America, as Alexis de Tocqueville already noticed in 1835. To this day, direct democracy – and within it some kind of lottery civic rotation decision-making – are hallmarks of modern societies. The representative draft serves as a microcosm of society and breeds ethics of inclusion.

Jury’s in, Jury’s out

In 1968, the U.S. Congress passed a law for draft juries based on a fair cross-section of the community. Juries were presented for bills to better regulate as fair, neutral, and without party affiliation or personal interests. As guardians of public justice, jury drafts enable political novices in common law countries to judge as an enactment of participatory democracy and an egalitarian society.

To this day, lottery jury systems are praised as self-regulating democratic acts and serve as a foundation of common law and democratic participation. Petition drives and Volksbegehren are until now common in Europe and the USA, in which citizens can point the attention of the legislation to currently-pressing issues of concern or evolving legal reform needs.

A place for a lottery system in modern U.S. politics?

Interestingly, the Supreme Court does not include any outside or potential jury recommendations. Neither does it consult a rotating governing body that represents a broad spectrum of ages. Stability enacted through life-long Supreme Court judges’ terms detaches the U.S. Supreme Court from any rotation influence in their decision-making.

When considering the leverage 9 Supreme Court judges have over the 330 million strong U.S. population, an over 35 million people per judge ratio without any rotation or lottery possibility makes the system profoundly unrepresentative, as I covered in my previous blog [here there will be a link to the blog above].

If considering lottery as a vital way to democratize political will and judicial decision-making, today’s innovation is not only that the lottery draft is open to all citizens – given that in the Athenian city-state non-citizens, children and women were excluded to be drafted.

Today’s ethics of inclusion and economic value in diversity should pay attention to disparate impact analysis and ensure that people from all sorts of backgrounds are represented in a draft.

Intergenerational equity concerns demand a lottery system with a diversified age quota. Lottery drafts could pay particular attention to age brackets to ensure that young, middle-aged and older people are participating together in common solution finding or evaluating policy choices.

In behavioral studies, decisions that bundle viewpoints for now and later were found to breed intergenerational harmony. Age-balanced choice forums could cherish different life stages and lifetime horizon perspectives in order to ensure a temporal decision optimum and intergenerationally-representative direct democracy for this generation and generations to come.