Intergenerational equity concerns have grown significantly over recent decades, and our political and legal systems are skewed in ways which can exacerbate and intensify these issues. Julia M. Puaschunder, an economist and psychologist at the ​​Inter-University Consortium of New York, discusses intergenerational fairness in the US Judiciary with attention to age-balanced decision-making. 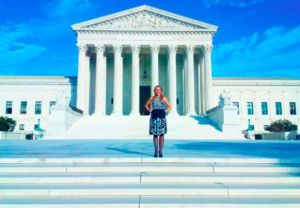 Intergenerational inequality on the rise

An aging Western world population will require pension and social welfare reforms. The indebtedness in many Western nations was exacerbated by the 2008 recession and rescue and recovery aid during the COVID crisis. In combination with rising student debt in the U.S., these pressures and concerns have created deep intergenerational inequality. Social welfare sustainability is a particular concern: a shrinking body of young people must subsidise the pension, healthcare and welfare support for older generations as they grow disproportionately.

COVID and the climate

COVID-19 has also brought a challenging intergenerational inequity along with the elder being the most vulnerable for fatal outcomes while the younger population appears to be most prevalent to face longer-term COVID long haul complications that are not well understood by the medical profession. To this day, there is no standard treatment for COVID Long Haulers.

The climate crisis – with its capacity to create irreversible lock-ins, uncontrollable negative effects and disastrous tipping points that escalate climate and economic instability – also puts a disproportionate burden on younger and future generations. They face growing demands to change their lifestyles and raise funds for climate stability in order to enact climate justice for future inhabitants.

Intergenerational fairness has recently been leveraged into a judicial foundation for multiple legal actions. For instance, children around the world are starting to take governments to court over climate mitigation action based on intergenerational equity concerns.

On the international scale, the Intergovernmental Panel on Climate Change (IPCC) and the United Nations Conferences of the Parties on Climate Change (COP) agreements have set the stage for wide-scale legal and policy changes to avoid climate change for the benefit of future generations.

The founding fathers of the US Constitution initially debated a model of stable Amendments, but flexible case law interpretations were ultimately determined by the Supreme Court to fit changing circumstances and meet changing demands of evolving moral and political values. The political independence mandate led to life-long Supreme Court terms for the judges on the court, whose number has been capped at a total of nine judges since 1869.

At the time of the founding of the Supreme Court in the United States, the average life expectancy was around 38 years for the upper class, who formed the initial Supreme Court for most of its 233 years of existence.

It is striking that the average age of Supreme Court Justice is 62, compared to a median age in the US of 38 years. Considering that 85% of the current U.S. population is below the age of 62 years, the life cycle stage of the judges is narrow and unrepresentative of the majority of the population.

Given the gravity of what is at stake with regards to debt, social welfare system sustainability, long-term health impairments and ecological disasters, the weight given to the decision making of 9 older-skewing political appointees for 330 million US citizens is risky. Especially when discounting the longevity of the upcoming generation and the consequences of inaction on social welfare reform and the climate crisis implying the danger of unfavorable health or ecological conditions, there is a lot at stake.

Intergenerationally-balanced panels have been preferred in lower courts to find more equitable jury decision making. Term limits have been posited as a way to ensure that turnover refreshes the Court’s membership with greater regularity.

Age-sensitive choices can be alleviated by providing a broad range of viewpoints that come from all stages of life. A younger Supreme Court judge appointment appears not only to offer a diversified decision-making perspective portfolio.

Younger judges also have the political advantage to hold a longer-term discounted value and more opportunities to learn and sophisticate in training on-the-job. It would also allow to reap the building up of seniority along a longer lifetime way. Jury rotation systems may be added to imbue flexibility and revitalize the court with ethics of democratic inclusion in the decision-making process of longer-serving judges.

Behavioral economics influences could become subject to scrutiny to determine decision-making patterns and avert potentially unnoticed intergenerationally imbalanced distortions. In particular, behavioral insights on curbing fallibility over the course of a lifetime could become the basis for arguing to factor in different life-stages’ viewpoints in Supreme Court decision-making.

Improving human decision-making quality over time and in regards to the social collective is the innovation of behavioral insights that have revolutionized economic agents but also governance models in a most vibrant sophistication of social sciences in the most recent decades.

Given the threats to future generations and the seriousness of spheres in danger that are currently under scrutiny, including ecological and economic survival, the Supreme Court appears to hold some of the keys to our future prosperity.

Just as many laws have to change to make our societies and our economies fit and safe for the future, the rules governing how the law is made may also be advised to become subject to innovation and more direct democratic decision-making.

Finding new ways to breathe new life into our institutions and revive democratic participation appears crucial to protect and support the rights and prosperity of generations to come at a time when so much is at stake.