Sarah Pickard is a Senior Lecturer at the Université Sorbonne Nouvelle in Paris and is the author of Politics, Protest and Young People. In this blog, she assesses the role of young people in French politics, especially during the presidential and legislative elections earlier this year. 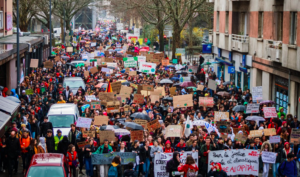 Young people’s political participation has been under the spotlight in France this year, from voting – or rather not voting – and for whom they voted, to their protests and direct action. A lot has been going on that reveals a growing cleavage in political engagement along age lines.

Let’s dig into the data about these intergenerational cleavages to see what has been happening, while, as always, acknowledging that young people do not form a homogeneous group and there are some big differences within generations, as well as between them.

Voter turnout was a huge issue for the Presidential elections held on 10 and 24 April 2022, followed by legislative elections on 12 and 19 June. A striking trope in all four votes was young people’s remarkably high abstention rate, i.e., the proportion of over 18-year-olds eligible and on the electoral roll who did not vote.  Moreover, this figure does not even include those who did not register to vote or were not allowed to vote, or blank votes, an option in France, and spoilt ballots.

For the presidential elections, the overall abstention rate across all age groups was 26.3% in the first round and 28.0% in the second round (compared to 22.2% and 25.4% in 2017), according to the French Home Office (ministère de l’Intérieur). Exit polls and surveys indicate abstention rates were considerably higher among the young than the elderly.

In the legislative elections, the overall voter abstention rate was 52.4% in the first round and 53.7% in the second round (compared to 51.2% and 57.3% in 2017). However, young people had substantially higher rates with some exit polls asserting that around three-quarters of enfranchised 18-24-year-olds and half of 25-34-years-olds did not vote, whereas the highest participation rates were among seniors.

For voters under 34, Mélenchon was very much the most popular candidate in the first round, followed by Macron, then Le Pen. But the far-left candidate did not get through to the second round between Macron and Le Pen. Intriguingly, opinion polls show many young Mélenchon supporters opted to abstain or vote far-right.

This seemingly surprising phenomenon can be partly explained by disappointment in the President’s policies over the past five years on specific youth policies and wider issues of special importance to young people, such as climate change and the cost of living. Mélenchon and Le Pen capitalised on this, targeting younger members of the electorate, thus also pushing out Yannick Jadot from the Green Party. Older voters tended to pick Macron in the first round followed by Le Pen then Mélenchon.

Two months later, in the legislative elections, around 42% of 18-24-year-olds and 36% of 25-34-year-olds voted for candidates from the new left-wing collation ‘Nouvelle Union Populaire Écologique et Sociale’ (NUPES), and did so much more than older age groups.

So, there is an obvious generation gap regarding elections regarding abstention, as well as support for particular politicians and parties. But high rates of abstention among the younger generation do not necessarily equate with political disengagement or disinterest in politics.

They can also be explained by disappointment, distrust and anti-politics, whereby the political elite are held responsible for low turnout rates – it is a supply-side issue – because they have alienated young people through political communication, priorities and policies. Young people tend to have more socially liberal values and be more socially progressive on issues such as immigration, racism and identity.

In this way, there is a clear generation gap in terms of social and economic policies, preferences, priorities and values with young people being particularly concerned about the environment and precarity. This is also reflected in the issues young people have been campaigning and protesting about, notably climate change, racism, feminism and social inequalities.

Resourceful and creative young people have been engaging in a wide spectrum of non-electoral forms of political engagement that I conceptualise as ‘Do-It-Ourselves’ (DIO) politics, which provides more of a sense of agency, efficacy, positive emotions and belonging.

Up to the politicians

The demographics are decisive because France has an ageing population wherein the proportion of over-65s on the electoral roll is around 27.5% compared to 25.6% for 18-34-year-olds.

This has crucial implications in terms of policy priorities from politicians that may further dissuade young people from participating in future elections and instead partake more in non-electoral kinds of political engagement, leading to a downward spiral of democratic deficit.

It is up to politicians to be more inclusive and less instrumental.

Photo by Benny_B2R on Pixabay