Jörg Tremmel is a Co-founder of Germany’s Foundation for the Rights of Future Generations. Milena Weber is a student of Global Environmental and Sustainability Science and Political Science at Leuphana University in Lüneburg, while also working for FRFG. In this joint piece, they look at how the German government is approaching the storage of nuclear waste, and what citizens can do to influence it. 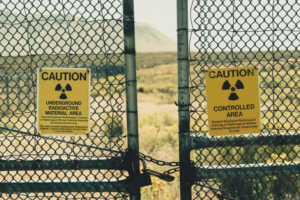 After the events of Fukushima in 2011 many governments chose to phase out nuclear energy. However, this does not mean that everything has been settled for future generations in these countries.

A long-term underground repository must be found for the radioactive waste that has been produced over the past decades.

How many present and future people will be affected?

We are dealing with unimaginably long periods of time. According to Roman Krznaric, author of the book “The Good Ancestor”, the interests of those alive today – about 8 billion people – are pitted against those of all people who will be alive in the future, which in the next 50,000 years will already amount to about 6,750 billion people. 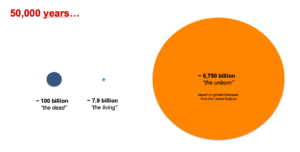 One single generation will have to make a decision that will be more or less binding for thousands to come. This is why all age groups within the current generation should be able to provide their input. This includes the involvement of young people which inherently comes with several advantages:

–  The orientation becomes less focused on the present and shifts more towards the future.

–  Fresh ideas and approaches to solutions are introduced.

–  General interest and willingness to participate is increased.

–  The acceptance of later decisions is enhanced.

In addition, young people tend to be more open-minded and therefore likely to be more receptive to an evidence-based process, at least compared to established national and local politicians. If the youth is involved in these decision-making processes at an early stage, they may be able to assume key positions in society in the future and act competently as multipliers of knowledge and awareness.

The search for a repository site in Germany

While Finland is the first country that has completed the process, in many other countries the search for a repository site for nuclear waste is just beginning to take shape. Among them is Germany, a region in which 30,000 m3 of extremely radioactive waste has been produced since the first installation of a nuclear power plant only 60 years ago (Berlin Institute for Participation, 2018).

This enormous amount needs to be stored as quickly and for as long as possible deep under the surface in order to protect those living close to the current temporary repository sites from the dangers of harmful radiation. According to a law passed in 2013, the areas that are unsuitable are gradually excluded until, in the end, the repository will be built in the most suitable region.

The decision on a site for the final storage of nuclear waste in Germany is to be made in 2031, and the repository is to be built and filled from 2050 onwards (National Citizens’ Oversight Committee, 2020a).

How citizens can influence the search

The Federal Office for the Safety of Nuclear Waste Management (BASE) coordinates and controls the process and guarantees qualitative public participation (National Citizens’ Oversight Committee, 2020b).

BASE and NBG organise various formats in which citizens can meet with experts and discuss the latest developments (Federal Office for the Safety of Nuclear Waste Management, 2022).

How much power does the public have?

None of these offers for participation grant the public direct decision-making power, but they nevertheless lend considerable weight to the public voice. Citizens are given the opportunity to inform themselves and to critically question the procedures and decisions together with others.

They can even demand ‘qualified reviews‘ and take legal action before the Federal Administrative Court if they are not satisfied with the decision made (Hagedorn, 2019; National Citizens‘ Oversight Committee, 2020a).

Whether this will be enough to give citizens the feeling they can trust their government and accept a repository even in their place of residence is hardly predictable today. Nevertheless, it is undeniable that the way this search for a repository has been shaped is the result of many years of work focusing on the common good and learning from past mistakes.

The next few years until the final decision in 2031 will be long and arduous, but there has arguably never before been such a sustainable and promising participation format.

Photo by Dan Meyers on Unsplash