In a week full of news, the government slipped out the announcement that student loan interest rates will be capped. That might sound like good news for students, but as Liz Emerson, IF co-founder explains, the young will be paying back much more than ever before, and for longer. 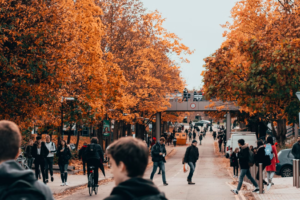 The retail price index (RPI) measure of inflation hit a whopping 9% in March 2022. That is important for students because the March inflation figure is used by the government to set the student loan interest rate for the following academic year.

This meant that, unless urgent action was taken, from September 2022 post-2012 students and some graduates would have faced a near tripling in their student loan interest rate, up from 4.5% in April 2022 to an eye-watering 12% (based on that 9% inflation figure + an extra 3% the government adds for good measure).

Student loans are supposed to be no higher than market rates, but even with the 7.3% cap, students will be charged interest rates that are far higher than other forms of borrowing. For example, the government itself can borrow at around 1.5%, while the average mortgage interest rate in June 2022 was 1.7% (on average borrowings of £237,000), and commercial loan interest rates hover at around 1-2%.

Will students be better off?

As always, the devil is in the detail. Although student loan interest rates have been capped, student borrowers’ hands have been tied in another way. The government has announced that it will extend the student loan repayment period by another decade!

This means that the average earner could be caught in repayment for up to 40 years. Many will be in their sixties with their own grown-up children before their student loan debt is written off.

Advocates of the marketisation of higher education argue that the current system of “income-contingent” student loans is designed so that no student should be put off entering higher education because of a lack of money; the student loan system allows any child to be able to afford to get by while, so the rhetoric goes, “investing in their own education”.

It is therefore alarming to find that government support for student maintenance loans – those loans that cover living costs rather than fees – will, in 2022/23, be the lowest in seven years, making the cost-of-living crisis for the poorest students that much harder.

Remember too, that student maintenance loans are means-tested, and how much students receive is based on their family household income, with the in-built assumption that families, or students working while they study, can cover the shortfall between actual living costs and the maintenance loan given. Even for students with supportive parents and guardians, filling that gap is increasingly difficult during a cost-of-living crisis, especially for those supporting multiple student children.

Proponents of the current system (mostly older generations who got their own university educations for free) argue that the young today should contribute more towards the cost of their own education, rather than passing that cost onto the general taxpayer. In reality, double-taxation has been imposed on the young in the form of the 9% student loan repayment rate, which sits on top of the progressive income tax system we already have in place.

It means that a graduate, earning just over the repayment threshold – currently around £27,000 – will face a marginal tax rate of 42.25%: 13.25% in national insurance contributions (which have just been increased by 10%); 20% in income tax; and 9% in student loan repayments. It is all very well the government saying that low-earning graduates will not pay that “graduate tax” if earning too little, but since from 2023/24 the threshold of repayment will be dropped to £25,000 (rather than increased in line with inflation), the wonder of “fiscal drag” will pull more recent lower-earning graduates into repayment more quickly.

Why would the government do that? With student loan borrowing set to reach £500 billion by the mid-2040s – and the failed experiment in turning student debt into an asset class to sell-off to the private sector – the young are easier targets for higher taxation than older generations, who are a larger and better-distributed voting group.

Our student loans system is a mess thanks to the misguided notion that higher education institutions would turn themselves into a market, competing for students through fee discounts, bursaries, and other awards.

Instead, as soon as fees were tripled in 2012, nearly all higher education institutions charged the maximum annual student fee of £9,000. Following a decade of bloated pay for Vice-Chancellors (one of whom compared herself and her fellow Vice-Chancellors to international footballers), binge borrowing and spending, university spending is higher than ever, with graduates expected to foot the bill.

Would it not be fairer to past, current and future students, as well as to taxpayers, if we returned to a system of block grants and maintenance grants/loans within our already existing progressive tax system?

Photo by Alex Motoc on Unsplash