On 7 June IF is hosting a webinar (sign-up here) on the cost-of-living crisis facing young people. In this article, John Hobby, IF researcher, explains the economic backdrop to the mounting financial pressures facing younger generations. 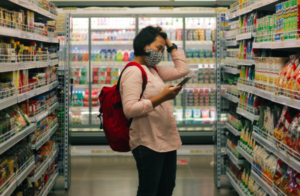 Consumer price inflation hit 9% in April, a four decade high that will squeeze the spending power of the whole population but will have a particularly drastic effect on the young. Inflation will disproportionately affect young people through stealthy tax rises, eye-watering student loan interest rates and increases in prices for the goods that young people are forced to spend the most on.

In Packhorse Generation, IF explained how the government is freezing tax thresholds during a time of high inflation in order to increase tax receipts and pay down the government debt incurred by spending during the COVID-19 pandemic. This tax rise by stealth works as follows.

During times of high inflation, the best-case scenario is that nominal salaries will increase in line with inflation so that people can weather the rising costs of living. However, when tax thresholds are frozen, this erodes the real value of the tax-free allowances and means that a higher proportion of their income falls into higher tax bands.

People, therefore, end up paying a higher proportion of their income in tax at the same time as their living costs increase.

Now they are earning £33,000 but paying income tax on 62% of their income (£20,430) – even though the inflation-adjusted value of their pre-tax income has not changed.

The government has committed to freezing income tax and NICs thresholds until 2026 and student loan payment thresholds until next year at least, meaning people will pay a higher proportion of their income on all three forms of taxation. The recent decision to raise the tax-free NICs threshold to £12,570 will partially offset this effect, but not enough to counter the 1.25pp NICs increase (an increase of 10%) to pay for social care reform.

This means that everyone will be paying a higher proportion of their income in tax, but the effects will be especially felt by low and middle earners (who are more likely to be young) and university graduates.

At the same time, costs of living are rising dramatically, so people are forced to meet higher costs with smaller after-tax incomes. In this way, the government is manipulating the progressive tax system in order to increase tax receipts during a cost-of-living emergency.

Like many central banks, our report underestimated the scale and persistence of the current inflationary pressures. Using the Bank of England’s (BoE) May inflation forecasts, which estimate inflation will not return to the 2% target until 2024, we now find that a graduate who earned £27,000 in 2021 will see their inflation-adjusted discretionary income (income left after taxation and necessary spending) drop by 44% over the next 5 years.

High inflation now will also decrease the spending power of graduates long into the future. Interest rates on student debt are linked to the obsolete Retail Price Index, meaning graduates will see their debt grow at between 9–12% per year come September. This figure is ludicrously high, given that the BoE base rate currently stands at 1% and the prevailing market rate on unsecured commercial loans was around 6% in February.

These eye-watering interest rates will drastically increase the outstanding debt of all students and lock many into repaying their loans for much longer than they would have otherwise, slashing their future disposable income.

Cost of living and wages

All of the above analysis assumed that inflation would be felt equally across the generations and that pay would rise in line with inflation for young people. Neither of these assumptions are matched by recent Office for National Statistics (ONS) data.

ONS inflation data show that increases to housing and energy costs are the biggest contributors to April’s CPI figure. High house prices have locked young people out of homeownership, meaning that the vast majority of young people are stuck in the private rental sector. This means they pay a significant premium on their housing costs compared to owner-occupiers and often live in poorly insulated homes, increasing both their housing and energy costs.

IF analysis of the ONS Family Spending Workbook suggests that housing and energy represents 30% of the expenditure of under–30s, compared to 13% for 50 to 64-year-olds. This suggests that young people are likely to be severely hit by the recent inflationary pressure.

Recent PAYE data also suggests that wage increases not keeping pace with price rises, especially for young people. Median pay growth in the year to April was just 4% for 18 to 24-year-olds, compared to the national average of 5.6% over the same period.

25 to 34-year-olds experienced a more significant increase to their pay, 6.5% in the year to April, but this was highly concentrated among the professional service industries and is still not high enough to counter the rapidly increasing cost of living.

The above observations suggest that inflation will be felt more acutely by young people, meaning that the price of goods that they typically to buy will increase much faster than their incomes. This will likely lead to an even larger hit to living standards than estimated above.

Rapidly rising prices, stagnant wages, stealth taxation and a punitive student loans system mean that the current cost-of-living crisis is hitting young people hard and will continue to do so for years to come.

IF believe that the government needs to do more to help young people deal with these pressures, starting by unfreezing tax brackets so they rise in line with inflation, reforming the student loan interest rate system and offering more support to young households.

Join our free webinar, The cost of living crisis facing young people: what can we do about it?

Photo by Viki Mohamad on Unsplash