Loneliness is the theme of this year’s #MentalHealthAwarenessWeek. Liz Emerson, IF Co-founder, lays out IF’s research into young people’s loneliness and explains why greater investment in earlier mental health interventions is needed. 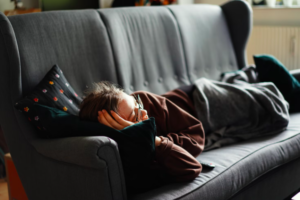 A decade in the making

For more than a decade the Intergenerational Foundation (IF) has researched the plight of young people. In 9 out of 10 areas researched, the position of young people has either stagnated or declined. Young people’s declining mental health has been part of the picture.

Between 2008/9 and 2017/18, the percentage of young adults with some evidence indicating depression or anxiety increased from 18% to 25%.

In early 2021, the Office for National Statistics (ONS) found that rates of depressive symptoms in adults aged 16–39 had more than doubled in comparison to before the pandemic.

The growing scourge of loneliness

In 2018 we published our annual index under the theme of wellbeing, and compared three groups of 20-somethings over a period of 20 years by tracking their responses to surveys. That research concentrated on five areas of wellbeing that interplay and influence overall wellbeing scores: economic wellbeing; relationship wellbeing, health wellbeing, personal environment wellbeing, and belonging wellbeing.

While overall wellbeing had declined by 10% over the 20-year period, it was relationship wellbeing that had reduced the most, with a 50% decline in the quality of relationships with family and friends between 2005 and 2015. Our research made the Top 3 BBC news stories that day.

In 2020, IF updated the previous Index and found that the largest deterioration was in the social wellbeing indicator – which fell by more than 70% during the period researched. In 1991, 36% of young adults were either married or living as a couple. Fast forward to 2017/18 and just 13% of young adults were in settled relationships, equivalent to a decline of almost two-thirds. In previous wellbeing research, having successful intimate relationships has consistently been shown to be one of the most significant variables for predicting positive wellbeing.

The quality of relationships that 20-somethings have with their family also appears to be under strain, falling from 34% in 1991 to 16% in 2017/18. Meanwhile, older generations, according to a 2018 ONS survey, were 63 times less likely to report loneliness than those aged 16 to 24 years.

For young people with emotional or mental health needs, the passage from child to adult mental health services can, according to Kadra Abdinasir, Strategic Lead at the Children and Young People’s Mental Health Coalition (CYPMHC), be a “particularly difficult period. The needs of this group may worsen without the right support in place, leading them to fall through the cracks of services.”

IF, alongside others, has long raised our concerns about the cliff edge young people face. The National Health Service (NHS) recognised the need for a smoother transition in the NHS Long Term Plan, and promised to extend the provision of child and adolescent mental health services (CAMHS) to under–25s.

According to the ONS, younger generations also felt more lonely than older generations, had lower levels of happiness, life satisfaction and the feeling that what they do is worthwhile, during the pandemic.

Just this week, 1 in 10 GPs said that they had no choice but to put children or young people on anti-depressants at least once every month due to a lack of other options, with 70% stating that they were providing mental health support outside of their competence to children.

The UK is not alone. According to the OECD, 15–24 year-olds’ mental health worsened significantly in 2020/21 with a doubling for this age group.

COVID-19 impacts and uncertainties meant that young people were 30% to 80% more likely to report symptoms of depression or anxiety than adults in Belgium, France and the United States in 2021 with “higher levels of loneliness also reported by young people.” And that is no surprise when their educational establishments were closed or heavily disrupted: learning moved online; reduced social contact, daily routines affected; and children from poorer families locked out of learning entirely if they could not afford internet access or have a home computer.

With overcrowded housing increasingly an intergenerational fairness issue, due to the cost of renting, children and young people, who might otherwise have been able to expend energy in parks or leisure centres, found themselves unable to leave their much smaller homes. Even psychiatric treatments were via screens rather than in-person.

During the pandemic the government was accused of not doing enough to prioritise the policy interests of children and young people while awarding billions of pounds to protect businesses and households.

The £500 million package announced in 2020 was criticised as not being enough. IF research demonstrated that government spending has been increasingly skewed against children and young people and found that, well before the pandemic, the government was spending £6,000 more on each pensioner than it did on each child.

Out-patient mental health spending on pensioners tripled between 2011/12 and 2018/19 but only increased by 5.6% for children. And this is at a time when poverty rates for pensioners had more than halved while child poverty remained stubbornly static at 33%.

As Sir Norman Lamb stated, in the foreword to IF’s “Costing Young Minds” research report, “We must also look at the long term…to consider the young people whose long-term life chances are at risk of being blighted…Ignoring prevention and early intervention will affect children, young people, their families, and public services for a generation.”

A lack of spending in childhood leads to fiscal loss in later life. Since around 50% of all mental health disorders start by the age of 14 years old and 75% by the age of 24, spending more, and spending earlier, is good for children, good for their families, good for society, good for combating loneliness, and also good for government spending in the long term. I will leave you with this headline from Forbes magazine: “Old People Died Of Covid, Young People Are Dying By Suicide”.

If you need someone to speak to urgently you can call the Samaritans on 116 123.

Photo by Adrian Swancar on Unsplash