It is Earth Day this week. The theme for the 52nd anniversary of the annual event supporting the global environmental movement is “Invest in Our Planet”. Alec Haglund, IF researcher, writes about the need for urgent action to tackle the climate crisis, which is the most pressing intergenerational justice issue facing younger and future generations. 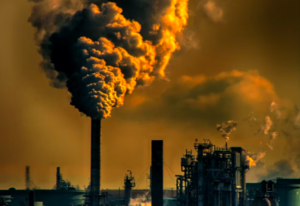 Earth Day is held this year against the backdrop of the third part of the Intergovernmental Panel on Climate Change (IPCC) report, which was published earlier this month. What could be understood as one of the most significant pieces of news in the history of humanity received very little coverage considering its importance. The report sets out the actions the world needs to take and makes it clear that we are living in the “now or never” moment if we want to maintain at least a theoretical possibility of keeping warming below 1.5°C degrees.

According to the report, maintaining 1.5°C  is increasingly unlikely as the world is currently heading towards 3°C degrees warming above pre-industrial levels. Many of the promises made by governments across the world in terms of how to reduce levels of emission are inadequate and heavily reliant on the idea that efficient carbon-capture technology will be developed in the near future.

But it is not too late. What we need to do is build a low-carbon economy by aggressive government investment in green energy and industry, starting right now.

A window of opportunity

The transition towards a low-carbon economy that can support a high quality of life while living within the planetary boundaries requires a radical transformation of our systems of production and distribution. As discussed in a previous IF blog, such policy changes must be holistic rather than fragmental piece-meal solutions which would, at best, slightly delay the crisis. But it is difficult to create a political environment that can support and sustain demands for such a transformative change in how politics and policy is made. This is why it is increasingly important to grab hold of those opportunities when they arise.

The current cost-of-living and fuel crisis presents us with a window of opportunity. Instead of cutting fuel duty taxes and supporting up to six new North Sea oil and gas extraction projects, the government could provide holistic solutions that would help solve: the cost-of-living crisis; high energy emissions; and the dependency on hydrocarbons from authoritarian countries all at once, without burdening future generations. A holistic, ecologically conscious and intergenerationally fair response to the crisis which brings down energy costs and emissions while providing high-quality jobs would have wide support in society.

The fact that the fuel and cost-of-living crisis has not resulted in massive investment in green energy, energy efficiency, stopping the subsidising of oil companies that make billions of pounds off the backs of UK consumers, or tighter public control over the energy sector, reveals just how much work there still is to do. In a time of ecological breakdown, moments which allow us a political window with potentially widespread support for transformative green policies must be harnessed swiftly.

The rationale behind the irrationality

The Global North is responsible for approximately 92% of cumulative excess carbon emissions. Between 1990 and 2015 the consumption of the richest 1% drove twice the amount of emissions as the consumption of the bottom 50% of the world combined. In order to ensure that the climate crisis does not lead to an intergenerational climate debt that can never be paid back, those in power in wealthy countries must do more.

In accordance with the theme of this Earth Day, “Invest in Our Planet”, we must dissect the perceived irrationality of investments in the fossil fuel industry. It is irrational from the perspective of humanity to continue building and using fossil fuel infrastructure, but from the point of profit maximisation it unfortunately remains rational.

To change this state of affairs, policy must reverse the antagonistic relationship between the interests of humanity and future generations on the one hand with the interests of the energy industry on the other. Unless we make it irrational from the perspective of profit maximisation to invest in polluting infrastructure we will not see the rapid shift to a low-carbon economy we so urgently need.

At a time when effective global fossil fuel subsidies are approximately $5.9 trillion annually, the theme “Invest in Our Planet” is a call for an alternative path of action – massive government investment in green energy, the building of a low-carbon economy and the restoration of damaged ecosystems. The time for fossil fuels must come to an immediate end, according to the IPCC report, and the quickly decreasing costs of renewable energy makes it easier to make that case.

On this Earth Day, let us celebrate the progress of the global environmental movement while not overlooking the gravity of the situation we find ourselves in. Instead of this being “just another Earth Day”, perhaps it could be the time we all demand more from our governments, politicians and leaders. Collectively we are powerful, and we already have the answers of how to build a better and more sustainable world for future generations – we just need to make our demands be put into action.

Photo by Chris Leboutillier on Unsplash