Over the last two weeks, the Intergenerational Foundation has published a series of blogs connected by demands of, or reflections on, the COP26 UN Climate conference, and the issues raised by its announcements. In this blog, IF’s Digital Campaigns Officer Liam Hill sums up the different authors’ contributions to our blog series. 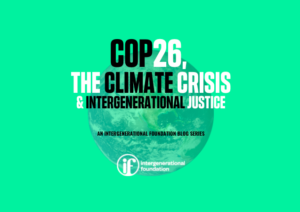 The most vital intergenerational issue

There is little doubt that climate change is one of the greatest examples of intergenerational unfairness imaginable: how can it be fair that unsustainable consumption by current and previous generations will be paid for by current and future generations?

Not just what, but how?

Liz Emerson, IF founder and CEO, started us off with a blog introducing this COP26 blog series. Her blog set up a central theme that has run throughout the blogs we have published over the last two weeks, “calling for greater solidarity with younger and future generations, calling for long-term investment over short-term gain.”

The question this sets up is how that intergenerational solidarity is shown and demonstrated, and some of our recent blogs offer answers to that question. John Hobby’s piece on ‘degrowth’ suggests that reconsidering our relationship with economic growth, and with GDP as a measure of it, is part of the answer. We should, he suggests, be ready to abandon economic growth as the primary measure of economic success and give greater weight to sustainability, to income and wealth equality — in other words, to prioritise a healthy economy over a growing one.

Kitty Thompson’s focus is on what the UK has already done to combat climate change, to set an example and be a blueprint for other nations, and to be a ‘worthy host’ of COP26. Angus Hanton looks into one of the early announcements from the conference, committing nations to an end to deforestation by 2030. An end to deforestation is welcome, he writes, but why not sooner?

Not just what, but who?

Another key theme in our blogs has been about who is making decisions and who is shut out? India-based climate John Paul Jose wrote with passion about the dangers climate change poses to communities like his, to agricultural workers, to indigenous communities. He asked why voices like his were shut out of COP26 when communities like his will be hit the hardest by climate change. James Sloam asked a similar question about young voices: why isn’t greater effort being made to include younger generations and their priorities in policymaking?

Lizzie Simpson assesses the responsibilities of governments and individuals, and considers where the balance lies between the two when it comes to limiting climate change. COP26 is vital, and further cooperation between governments will be vital.

Efforts to limit climate change will have the greatest effect if they come from the top down: everyone can make a difference, but it is up to those, namely governments (especially of larger and richer nations) and big companies, with the greatest power and influence to do the most.

And there is so much more that governments and big companies can do. Not only must emissions come down, but the quality of life all across the planet should rise.

Cumulative spending on energy R&D by national governments is less than $35bn per year. That figure could and should be so much higher. Showing intergenerational solidarity in policymaking is about showing ambition for future generations: that has to be done by reducing carbon emissions and limiting the global rise in temperature.

But it should also be about investing in the scientific solutions early; by producing the innovations which will help us to marry a sustainable planet with continued improvement in the quality of life of future generations.

With thanks to all of our authors during this blog series, and to everyone who has read, shared and engaged with what they have written: we are always grateful for the time that IF’s supporters take to write for us. If you would ever like to write for IF, on the climate crisis or any other issue of intergenerational fairness, you can get in touch by emailing [email protected].