As awareness of the damaging impact of climate change increases, there is a growing agreement that our current ways of life are unsustainable, and to tackle climate change we will need collective behavioural change on a global scale. However, the question is whether this change should come from government policy or from individuals voluntarily changing the way they act. Lizzie Simpson, IF Researcher, weighs up the merits of individual action in light of COP26. 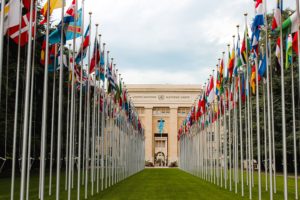 One of the key reasons why climate change is such a difficult problem to address is that it is a truly global issue, with no single person or country responsible. As such, it cannot be solved by any one country’s government alone, thus fixing this issue requires coordination on a global scale. Arguably the largest form of global governance that exists today is the United Nations (UN), an international organisation of which the majority of the world’s countries are members. One of the key ways that the UN exerts global governance is through summits, wherein country leaders and other key stakeholders from around the world come together to decide global goals which all countries will agree to work towards – with COP26 and the other COP events being key examples.

Arguably the most important COP event was COP21, which took place in Paris in 2015. During this event the UN created the “Paris Agreement”; whereby every member country agreed to work together to limit global warming to well below 2 degrees, with an aim of 1.5 degrees. Under this agreement, countries were required to devise plans to set out how they would reduce their emissions, known as Nationally Determined Contributions (NDCs), with the agreement that every five years these plans would be updated.

The Paris Agreement was heralded as a landmark achievement for global coordination to tackle climate change, but it also illustrates some of the key limitations of our current modes of global governance. While countries agreed to work together to meet specific targets, the lack of global laws mean there are no proper methods of enforcing these, and the targets are not legally binding. It is no wonder then, that prior to COP26 the majority of countries were not on track to meet their climate goals.

When discussing who should be responsible for mitigating climate change, individual actions can also play an important role. While one person’s actions may seem like a drop in the ocean, as more and more individuals choose to adopt more eco-friendly lifestyle choices, this can contribute to widespread shifts in societal behaviour which can help generate positive collective change.

Actions like taking fewer flights, using public transport and reducing your meat intake can all yield positive environmental effects if enough people choose to implement these lifestyle changes. This shift also forces companies to act in a more environmentally friendly manner, to attract consumers who increasingly opt for eco-friendly products.

While individual actions can be important, there is also a danger that emphasising individual responsibility and consumer choices can act to shift blame away from governments and high-polluting corporations. Indeed, one of the biggest examples of encouraging people to take individual action on climate change – the concept of the “carbon footprint” – was popularised by a BP media campaign. This is especially damaging when you consider that just 20 companies are responsible for 35% of worldwide carbon emissions since 1965, with 12 of these companies being state-owned.

COVID-19 has also highlighted the limitations of individual actions. In many Western countries, which traditionally have been some of the highest polluters, lockdowns meant that many eco-friendly lifestyle changes happened on a global scale overnight, as flights were grounded, and transport emissions fell dramatically. However, global carbon dioxide emissions only fell by 6.4% in 2020, showing that even with serious collective lifestyle changes, individual actions can only achieve so much.

Blaming climate change on individuals can also contribute to climate-related anxiety, which can be detrimental to mental health. A recent survey of 10,000 young people aged 16-25 across 10 countries found that nearly 60% felt either very worried or extremely worried about climate change. Three-quarters of young people said they thought the future was frightening, while over half said that they think humanity is doomed.

Current narratives around climate anxiety often characterise it as an individual problem, where the best course of action is for individuals to take actions to reduce their own emissions. However, this study shows that climate anxiety is a widespread phenomenon and not just a problem for a few individual people.

It also shows that a lot of younger people’s climate anxiety comes from a feeling of helplessness, as they are aware that collective action is needed to truly tackle the problem and they feel let down by governments and people in power. As such, the study concludes by recommending that in order to tackle the growing phenomenon of climate anxiety, those in power need to acknowledge the seriousness of climate change and place this issue at the centre of policymaking.

Climate change is one of the most obvious examples of intergenerational unfairness, as younger generations have contributed the least emissions, but will bear the biggest burden of the negative impacts of climate change. Consequently, younger people’s concern about climate change does not come from stress about their own individual actions, but comes from inheriting a world which is headed for climate disaster, while those in power do nothing to stop it.

As tackling climate change requires global collective action, individual action can have a small but important role to play, as it can have a ripple effect that eventually leads to wider societal changes. However, the biggest polluters are still big corporations, many of which are owned by the state, and thus governments have a much bigger responsibility when it comes to overall emissions.

Therefore, in order to genuinely tackle climate change, this will require top-down action from governments to shape policy to regulate these high-polluting companies. Let’s hope that COP26 will be able to do this successfully.