Professor of Politics at Royal Holloway James Sloam argues that the failure to encourage youth participation in the policy-making process marks a key failure of both COP26 and public policy in general. It has failed younger generations, and led to reactive and unsustainable policy towards climate change and a whole host of related issues. 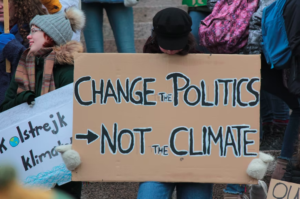 Friday 5 November was Youth Empowerment Day at the United Nations Climate Conference (COP26) in Glasgow. We heard from youth spokespeople inside the hall and youth protestors outside the hall about the need for action on climate change. But are the policy-makers actually listening?

Younger generations have faced successive waves of crisis. As the Intergenerational Foundation has highlighted, young adults bore the brunt of the 2008 Financial Crisis and subsequent Great Recession. Youth unemployment became more precarious, the cost of living housing (e.g. housing) increased, and youth provision was devastated (e.g. the closure of community centres, to lack of mental health services). These pressures have been exacerbated by the Covid-19 pandemic.

Although the (physical) health risk to older generations is far higher, the economic burden again falls most heavily on the young.

Every right to be angry

The gathering climate crisis marks an even greater challenge. Boris Johnson argued at the Youth4climate pre-COP26 event that: ‘young people around the world are already paying the price for the reckless actions of their elders… I saw the protestors earlier on, and frankly you have every right to be angry with those who aren’t doing enough to stop it.’ In this last sentence, Johnson seeks to instrumentalise the power of youth protest, to put pressure on countries during the negotiations.

Whilst world leaders at COP26 are keen to acknowledge that we need to reach a deal for future generations, it is clear from the conference negotiations (and mass protests outside the venue and in cities across the world) that young people do not feel they have a seat at the table. And, the failure to integrate youth voice into policy-making, to generate solutions, is a common thread across all of these crises.

As the youth protests, led by Greta Thunberg, show, young people are interested in politics, but feel marginalised from mainstream electoral politics. My research with the peer outreach team at the Greater London Authority has highlighted the huge potential for youth-led and youth-inspired solutions to policy challenges at the local level, to deal with issues ranging from knife crime, to affordable housing, to air pollution.

At COP26, we have heard stories about the action taken by youth activists across the world: from tree-planting in Uganda, to ideas to tackle water wastage in India.

As young people also tend to recognise, the issues of poverty, lack of services and environmental degradation are all intimately connected. So, we also need to think about sustainability more broadly – as articulated in the United Nations Sustainable Development Goals. 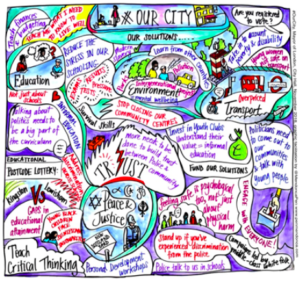 It is well-documented that young adults have very different political priorities to those over 65 (far greater than a generation ago), and place far greater emphasis on environmental issues, as well as immediate economic problems such as housing than older generations. Furthermore, given the overwhelming youth support for action against climate chance, it makes common sense for politicians and officials to capitalize on this enthusiasm. 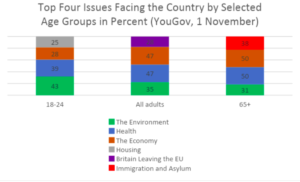 In this sense, it is hugely disappointing that COP26 provides no agreement, framework or even strategy for the greater inclusion of young people in policy-making. In an OECD report in 2020, it was recognised that youth participation is essential for the generation of sustainable and efficient public policy. This is something that has been spectacularly missing in the UK.

A pathway for action

Greater youth participation would provide a promising pathway for grassroots action against climate change and increase the chances that climate policy is successfully implemented.

A more responsive attitude to youth voice would also help to address many other economic and social problems that require urgent action.

Photo by Tania Malréchauffé on Unsplash