John Hobby, IF Researcher, looks at why GDP is an imperfect measure of human wellbeing and how changing how we think about growth could help us improve global living standards while reducing environmental degradation. 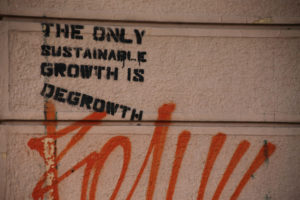 Green Growth has become the established theoretical and policy response to tackling climate change and ecological breakdown, with talk of a “Green New Deal” or “Green Industrial Revolution” dominating the conversation at COP.

Central to these visions lies the assumption that green technological substitution will allow a complete decoupling of economic activity from emissions and resource use to allow global GDP to continue growing indefinitely. This position asserts that we do not need to substantially change the global economic system in order to avert climate catastrophe.

Recent research, however, questions the empirical possibility of Green Growth, casting doubt over the decoupling of GDP growth from resource use and the feasibility of global decoupling of carbon emissions fast enough to avert global warming that will change the lives of billions. This line of thought is known as degrowth and argues that we can improve human welfare and reduce our impact on our planetary home by reimagining how we think about GDP.

Why GDP is not a good measure of welfare

GDP is not, and was never intended to be, a measure of human welfare. Instead, GDP is a national measure of the exchange value of all goods and services produced that are brought to market.

Despite the pervasive belief that GDP growth improves living standards, it is not true in all cases. For example, imagine a forest near a city is cut down and sold for timber, this increases GDP. The newly cleared land is used to produce high-fructose corn syrup, increasing GDP. This high-sugar foodstuff is then sold to the population, worsening public health outcomes and requiring greater spending on hospitals and medical treatment, further increasing GDP.

All of these activities increase GDP but do not improve, and may even worsen human wellbeing and harm the climate, making the causal link between GDP and social outcomes questionable at best. This ambiguous relationship has been investigated in detail in Happiness Economics, as the ever controversial Easterlin Paradox attests. It seems that there is little evidence of correlation between GDP and subjective wellbeing over time or between countries, despite the strong correlation at the national level.

Much of GDP growth is harmful to the planet and does not directly improve our wellbeing. However, governments continue to pursue GDP growth at all costs due to desires to raise living standards and the growth imperative imposed by the structure of the global economy. Degrowth involves realising which sectors of the economy need to grow to improve human wellbeing (renewable energy, education and public transport), which sectors are of a sustainable size, and what kinds of socially unnecessary, environmentally harmful production must be scaled back (SUV production, the fossil fuel industry and deforestation). Degrowth is therefore not about reducing GDP per se, it advocates a shift towards “growth agnosticism” in rich countries that already enjoy the highest living standards and have historically been responsible for far more than their “fair share” of global emissions.

Economists such as Jason Hickel and Kate Raworth point out that degrowth need not be accompanied by declining living standards. World average GDP per capita is currently around $17,600 PPP, high enough for everyone on the planet to reach the World Bank’s high income threshold. The problem is that consumption is unequally distributed and production is resource and energy inefficient. Recent research estimates that we could provide a high standard of living for 10 billion people in 2050 while reducing energy consumption by around 60%.

If scaling back harmful economic activity is accompanied by redistributive policies and the provision of widespread public goods, emissions can be reduced while improving social outcomes and living standards globally. Degrowth could therefore be well placed to resolve the apparent trade-off between the welfare of current and future generations assumed in much of the environmental economics literature.

Climate crisis is not all about emissions

It is clearly possible to decouple carbon emissions from economic activity through technologies such as renewable energy and carbon capture. We must therefore make every effort to transition to renewable energy as quickly as possible in order to reduce global emissions by 45% by 2030 and net zero by 2050. The only doubt that degrowthers have is whether our energy systems will be able to transition fast enough to avert 1.5 or even 2 degrees of warming if economies continue to grow at normal rates. This is because economies require more energy as they grow, and this increased demand makes the switch to renewable energy harder. With constant growth we are trying to run up a downward escalator.

However, the climate crisis is not just about emissions, GDP growth is tightly linked to resource use. There exists little evidence of absolute resource decoupling on the global scale due to the existence of hard limits on efficiency gains and the circular economy. Goods and services simply cannot be produced from thin air, as even the provision of services requires buildings and infrastructure. This is problematic because scholarship shows that resource use is the main driver of biodiversity loss and ecological breakdown.

This matters on the human scale as, rather than standing above and outside of nature as we have long imagined, we are vitally dependent on ecosystems to purify our water, to maintain fertile soil and to pollinate our crops. We therefore cannot afford to continue growing our economy indiscriminately and must instead focus our resources on improving social outcomes whilst remaining within planetary boundaries.

Not a major theme at COP26

A growing body of economic and earth science research is coming to the conclusion that if we do not reconsider the GDP growth imperative, we stand little chance of keeping global warming below the 1.5°C aim of the Paris agreement or the 2°C “worst case scenario”. However, the public debate around climate policy remains constrained by the unquestioned role of growth as an economic and a political necessity. It therefore seems unlikely that degrowth or capping resource use will be a major theme at COP 26. Hopes will instead be pegged to the ability of our current economic system to simultaneously deliver the development goals much of the world needs while preventing ecological and climate collapse.

However, in the current global economic framework, no country has been able to escape deprivation without growing its economy, and no country has ended environmental degradation with GDP growth. In order to provide for the needs of those alive today while also ensuring a safe planet for future generations, new approaches are clearly needed. If world leaders truly have the interests of younger and future generations in mind, it may be time for them to open up to the following insights from degrowth.