A new report from Joseph Rowntree Foundation (JRF) finds that one million families are paying rents that they cannot afford. Liz Emerson, IF Co-founder, takes a look at the research. 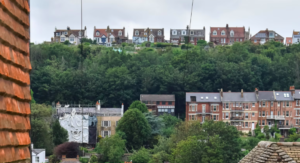 According to the JRF research, one million households are paying rents they cannot afford. These are private renters who are on the bottom 40% of incomes and who spend more than 30% of their income on rents. Researchers suggest that 624,000 households are affected.

A further 341,000 households face unaffordability pressures as their rents (after Housing Benefit) are disproportionately high while their incomes are so low that the vast majority of this group are living in poverty after housing costs as they are spending more than 40% of their disposable income on rents.

The high cost of housing can push households below the poverty line. While the study does not look at renters by age, previous IF research reveals that the average under-35 household was having to spend 63% of their weekly expenditure on essentials in 2019 with housing, utility bills and domestic transport accounting for 40% of all the money spent by the household in a typical week.

According to the JRF research, a couple with children living in the private rented sector are left with £306 a week to live on after paying rent, which means that they fall below the poverty line each week by £102.

This is because, of the 1 million low-income private renting households in receipt of Housing Benefit, around half (51%) still find rents unaffordable as they are left with too little money after making up the difference between actual rents and Housing Benefit payments.

Nor is being in work a guarantee against poverty caused by unaffordable housing, states the research. Four in five households unable to afford their rent have one or more adults in work, two-thirds of whom work full-time.

It is an easy call to demand that Housing Benefit should be increased in order to lift these low-income high-rent households out from poverty. The problem is that, much like with right-to-buy for first-time-buyers, increasing Housing Benefit merely drives up rents by encouraging private landlords and their agents to charge higher rents.

If a government steps in to subsidise the rent rise, then the taxpayer is left with the bill, while landlords take the profit. Direct or indirect taxes might have to increase, or the bill passed on to future generations to pay. And therein lies the intergenerational fairness dilemma.

One obvious response would be to build more affordable homes in the social housing sector. The JRF study argues that the nation could save £1 billion a year by moving 552,000 households over to the social rented sector, thereby delivering better value for money to the taxpayer. The authors argue that the money spent on investing in building new rental stock, which would be assets for the nation, would otherwise be spent lining the pockets of landlords. But building new social housing takes time and that is time that young families do not have.

Of course, with lower land values than the Capital, building more social housing in these areas may make more economic sense as long as there are enough local jobs for households to be able to escape poverty.

Deal with over-consumption and under-occupation

Meanwhile under-occupation in the home-owner sector is also putting pressure on the housing market as older generations are actually increasing their consumption of housing. In fact, during COVID-19 older households were buying up additional, larger homes with more space, outcompeting younger potential buyers, who have had to remain in the private rented sector for longer, putting yet more pressure on the rental stock and driving up rents.

In short, we require holistic reform of the housing market: reform that includes a mix of new building for rent or purchase; the reform of the taxation system in order to capture capital gains and unearned income; reform of tenure allocation to include greater social housing; as well as encouraging greater downsizing by older generations which would free up family homes for young families, and put less pressure for family homes onto the rental sector.

If enough members of older generations downsized we might even see the longed-for slowing of house prices and this would help younger people and lower earners.

Photo by Kai Bossom on Unsplash