Older generations make up an overwhelming majority of eligible voters in the upcoming German federal election. Many young people feel that their interests are being ignored in the three leading parties’ campaigns. IF intern Carlotta Hartmann examines younger generations’ democratic deficit, and what it might mean for policy in the future. 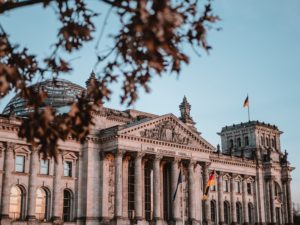 57.8% of eligible voters in the upcoming “Bundestagswahl” are 50 years old, or older. This is up from 52.3% in the 2013-election, as demographic trends toward an older population leave young people with consistently less voting power. In this year’s federal election, only 14.4% of voters are under 30, and the 2.8 million potential first-time voters make up only 4.6% of the electorate.

Naturally, faced with this electorate, parties campaigning for the majority’s vote will concentrate on older generations. In the weeks approaching the election, the three leading parties are paying insufficient attention to issues that matter to young people, writes Der Spiegel.

This is evident in the issues covered in the first of three TV debates between the Christian Democrats’ (CDU), Social Democrats’ (SPD) and Green-party (Bündnis 90/Die Grünen) chancellor candidates. Issues that are on young voters’ agendas played only a marginal role: digitalisation, precarious labour market conditions, soaring rental prices in cities, and pensions were hardly mentioned, if at all.

While some of these issues were addressed in the second “Triell” (a TV-duel, but with three parties present), viewer reactions pointed to a stark intergenerational divide in voter preferences. Watching the debate, 52% of 18- to 34-year-olds thought the Green Party candidate, Annalena Baerbock, did best. Among 35- to 39-year-olds and those aged 60 and over, only 21% found Baerbock most convincing. These age groups were much more convinced by the SPD- and CDU-candidates, respectively.

A similar trend, though weaker, is evident in terms of different age groups’ preferences for the next government. While 21% of 18 to 39-year-olds want the Greens to lead the government, the numbers of  40- to 64-year-olds, and those aged 65 and over are much lower, at 11% and 8% respectively. Overall, the Social Democrats look far better positioned to win. In the run-up to this election, there is a clear intergenerational divide in party preferences. Older people holding most of the voting power are deciding over young peoples’ futures.

Though climate change is not the only issue – and not the only issue of intergenerational fairness at stake in this election, it is one that has become symbolic of younger people’s lack of political power. Calling for urgent action by the next government, activists refer to it as the “Klimawahl” (Climate-Election).

The current legislation’s “Klimaschutzgesetz” commits Germany to achieving a 65% emissions reduction (based on emissions in 1990) by 2030. None of the parties’ policy proposals are sufficient to achieve this goal, according to a recent study by the German Institute for Economic Research (DIW Berlin). Still, the Greens have by far the most ambitious environmental policy, making combatting climate change their number one priority. They aim for a rapid expansion in renewable energy infrastructure and a transformation of traffic, housing, and mobility. According to the DIW study, their policy mix comes closest to achieving the 2030 emissions target.

The rise of gerontocracy

Aware of the urgency of the situation, underlined by the recent Intergovernmental Panel on Climate Change (IPCC) report, young people all over the world are becoming frustrated and losing hope. 75% of 16- to 25-year-olds are frightened by the future, and 65% feel that governments are failing young people, finds a global survey by Bath University.

Older generations’ growing electoral power would be less worrying if the young could rely on them to take their interests into account. However, only 30% of German voters aged 50 and over, and 27.9% of over-65s claim to take into account younger generations’ interests in environmental conservation and combatting climate change. Older people’s decision at the ballot box will significantly shape the outcome of this election. How younger and future generations are going to live lies, in part, in their hands.

A shift of electoral power to older generations is not a phenomenon unique to Germany. IF research has shown the increase in the past, and future expected increase, of the median voting age in the UK. Gerontocracy is on the rise in ageing populations, with older generations outnumbering the young.

Various policy instruments could help ensure that the interests of younger and future generations play a role in politics. IF is strongly in favour of lowering the minimum age for voting, allowing 16- and 17-year-olds to vote in all national elections. Other instruments include so-called Future Councils, or legal action.

22-year-old journalist Christian Hoch recently gave an emotive commentary on Tagesthemen, capturing many young Germans’ anxieties in the run-up to this election. On one of the German public broadcaster ARD’s most important daily news magazines, Hoch said, “The next federal government must take rapid action against climate change. If we don’t change anything, my generation will experience an increase in global temperatures of 2.5°C, or more.”

Without the implementation of policy instruments to increase younger and future generations’ representation in politics, young people in an ageing population rely on solidarity across generations. Increasingly, they are appealing to older generations to consider their interests. As Hoch puts it, “On our own, we can’t ensure that we will have a good future. There are simply too few of us.”

Photo by Yannic Kreß on Unsplash