With the upcoming election marking a potential turning point in Germany’s future environmental policy, the country’s demographics give older generations more political power, says Deutsche Welle. If older generations are less concerned about climate change and less supportive of policies to change it, this is disillusioning for those hoping for more ambitious government action against climate change. The distribution of electoral power in the UK, too, is skewed toward older generations, writes IF intern Carlotta Hartmann, as she compares the two countries’ generational divide over the climate crisis. 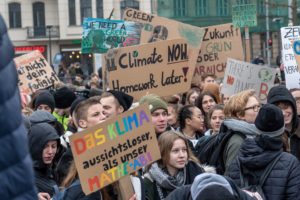 Young people are underrepresented in politics

On 26 September 2021 the German “Bundestagswahl” promises a change in the German political landscape. Many young voters will, for the first time, witness someone other than the Christian Democrats’ (CDU) Angela Merkel, German Chancellor since 2005, leading the country. For most of Merkel’s time in office, a grand coalition of the CDU and the Social Democrats (SPD) held power. This, too, is likely to change, with former opposition parties like the Greens (Bündnis 90/Die Grünen) having a chance at government-participation.

This parliamentary election follows a surge in debate about the climate crisis in recent years, pushed, in part, by movements like Fridays for Future. Young people’s voices on the streets, however, do not translate directly into votes. The young are vastly underrepresented in German politics: More than half of those eligible to vote in the upcoming election are above the age of 50, while only 15% are under 30, DW reports in a recent podcast.

In the UK, too, young people are underrepresented in politics. According to IF’s “Grey Power” report, the median age of MPs elected in the 2019 general election was 51, compared to a median age of 40 among the UK’s population. While it is to be expected that the average age in parliament is somewhat higher than in the general population – the minimum age for MPs is 18 – young adults are significantly less likely to be MPs. Adults aged 18 to 29 are underrepresented in both houses of parliament. A group that makes up 15% of the UK population thereby makes up only 3 percent of MPs, and no lords.

The climate crisis as an intergenerational issue

In light of the findings of the recent Intergovernmental Panel on Climate Change (IPCC) report, environmental policy change is urgent. The rate of change in the global surface temperature over the past five years is the highest it has been since 1850, while human-induced increases are the highest they have been in 2000 years. Under all 5 emissions’ scenarios, the IPCC predicts that the global temperature will reach the globally agreed safe limit of 1.5°C by 2040, and that it will continue to increase until the mid-century.

With younger and future generations being most affected by the climate crisis, their underrepresentation in politics at such a tipping-point is particularly worrying. There is a clear generational divide in attitudes to climate change, which is likely to impact political decision-making.

In Germany, those aged 14 to 39 are less satisfied with the government’s actions against climate change than those older than 40. Satisfaction with civil society’s engagement with this topic is also lower amongst those aged 14 to 39, and over 70.

More detailed data are available on how attitudes to climate change differ by generation in the UK. The 35th British Social Attitudes Survey, based on interviews conducted in 2016, shows a stark generational divide in belief in anthropogenic climate change, level of worry, and concern about consequences.

The proportion of 18- to 34-year-olds who believe that climate change is entirely or mainly caused by human activity is 46%, compared to 36% among the population. The authors of the British Social Attitudes survey point out that both proportions are relatively low, considering the Intergovernmental Panel on Climate Change (IPCC) conclusion that climate change is mainly caused by humans.

Protecting the interests of young and future generations requires attention to these interests in political decision-making and, currently, more ambitious environmental policy. One way to achieve this is to increase the older generation’s engagement with the issue. Groups like “Omas for Future” (Grandmas for Future), featured in DW’s podcast clearly show that young people’s interests can be supported across generations. Other instruments include lowering the minimum-age for voting, legal action, and creating institutional bodies to represent younger and future generations in politics.

IF strongly believes that 16- and 17-year-olds should be allowed to vote in all national elections. This is one way to counterbalance the ageing of the electorate. Considering other responsibilities that they have, many under-18s can be expected to be mature enough to vote. Looking at the generational divide in attitudes to climate change, this move might somewhat increase electoral support for more ambitious environmental policy.

As political scientist, and co-founder of Germany’s Foundation for the Rights of Future Generations, Professor Jörg Tremmel points out, it is worth looking at further institutional instruments for intergenerational fairness. He wants to see future generations represented by a Future Council of experts and citizens deciding on what is necessary to fight the climate crisis. Such a council, based on his proposal, would be allowed to table motions for debate in parliament.

Finally, courts are increasingly playing a role in defending the rights of young and future generations. The number of climate cases being brought to court has increased from 884 to 1550 between 2017 and 2020, according to the United Nations Environment Programme. IF has previously reported on how the climate crisis is being tackled in UK courts.

Earlier this year, the German supreme constitutional court made a landmark decision in the fight for intergenerational fairness. It ruled that the proposed “Klimaschutzgesetz”, an environmental bill passed in 2019 by the now-outgoing government, violates the rights of future generations.

Young environmental activists had presented their first-hand experience of the consequences of climate change. A similar case is ongoing in the UK, where a group of young activists and the climate litigation charity Plan B are taking the government to court, claiming that it has failed to produce an adequate plan for the nation to achieve its legally binding net-zero target.

Scientists are urging governments to take rapid action against climate change. Civil society and young people, in particular, are joining this call for more ambitious environmental policy. With young people holding less political power in Germany and the United Kingdom, achieving more attention for their interests, and implementing measures for these interests to be defended, is crucial.