Graduates are leaving university with scant prospects, feeling let down by policy-makers and waking up to the generational divide. Carlotta Hartmann, IF Intern, investigates the labour market pressures facing young Brits today 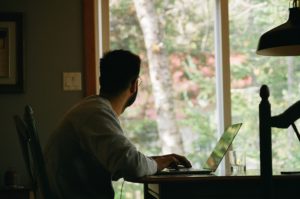 Young people across OECD countries have been disproportionately affected by the economic impacts of the COVID-19 pandemic. According to a recent article in the Financial Times, the percentage of unemployed under-25s rose from 11.5 in February 2020 to 12.95 in June 2021. In comparison, unemployment among those aged 25 and over increased by less, from 4.5 to 5.6 percent over the same period.

Young people have experienced a kind of wake-up call through the impacts of the pandemic, growing increasingly aware of the wealth gap between generations. This, paired with their dissatisfaction with democracy and frustration about their weak influence on politics in ageing populations, may be contributing to a radicalisation of the young, writes the FT.

Young people in the United Kingdom face extra hurdles on the job market. Recent graduates – those who have left full-time education less than five years ago – are more likely to be working in non-graduate jobs than non-recent graduates, who are usually older and have been working for longer. The ONS defines non-graduate roles as those “associated with tasks that do not normally require knowledge and skills developed through higher education to enable them to perform these tasks in a competent manner”.

From 2011 to 2019, the percentage of recent graduates in non-graduate employment fell slightly, while the number of non-recent graduates shows a slight increase. Still, there seems to be a mismatch in the job market; students are taking on loans to pay for tuition, but the job market fails to match them with jobs according to their qualifications.

While data on young people’s employment in graduate and non-graduate jobs for 2020 and 2021 is not yet available, it is clear that this group was particularly affected by unemployment during the pandemic. It is important to keep in mind that, overall, those holding a university degree are more likely to be employed than the population as a whole: the average graduate unemployment rate for Q1 2017 to Q3 2020 was 3.0 percent, while the total average unemployment rate for the same period was 4.7 percent.

Recent graduates, however, faced more difficulties finding jobs: the average unemployment rate for recent graduates was above the national average, at 6.3 percent. Young people who had recently finished their degrees were therefore more likely to be out of work than the population as a whole.

While some increase in unemployment among recent graduates in these months is expected, with universities finishing in summer,  the rate of 12 percent was the highest in three years. Graduates, even recent ones, were still better off than 16 to 24 year-olds overall: the youth unemployment rate was at 13.6 percent between July and September 2020.

Young people’s difficult situation during the pandemic is evident in the decrease in vacancies, too. As Europe shut down in March 2020, many jobs were simply removed. Between March and May 2020, there were only 476,000 vacancies in the UK. Compared to the same period in 2019, this means there were 365,000 fewer jobs, a 42 percent decrease.

Three industries were particularly affected by this development: vacancies in wholesale and retail trade, accommodation and food services, and information and communications industries were at their lowest levels on record during the early months of the UK’s lockdown. According to ONS data, the former two of these are the industries in which the percentage of young people is greatest.

Recent graduates, many of whom spent their final months of university mandated to stay at home and sat their final exams online, were faced with further complications in the job market in 2020. Graduate vacancies were reduced and internships cancelled. As previously reported by IF, the data suggests that many attempted to stay in education, rather than graduating into such a precarious job market.

By now, the demand-side of the UK-job market has largely recovered from the pandemic. In May to July 2021, there were 953,000 vacancies. This puts the number of vacancies in the UK above its pre-pandemic level, raising the prospects of employment for young people now. Only vacancies in the wholesale and retail trade industry – the industry in which the percentage of young people is greatest! – remains below its pre-pandemic level.

What are the consequences?

It is also clear that young people are ill-equipped to handle unemployment. Most have not had time to build up savings to fall back on, and certainly no regular pension funds to rely on. Even those who are in the privileged position that they can be supported by their families face the blow of not achieving hoped-for independence.

The impacts are immediate. After months of uncertainty that have taken a toll on young people’s mental health, searching for jobs in such a competitive market is draining – especially when the chances are high that graduates will end up in jobs that they are overqualified for. It is no surprise that many young people have grown pessimistic about their futures.

Photo by Yasmina H on Unsplash