On Monday, the UN’s Intergovernmental Panel on Climate Change published a landmark report providing a highly comprehensive review of climate change science. While the report has been described as “code red for humanity”, Melissa Bui asks if world leaders will treat the climate crisis with the same urgency that they treated the pandemic crisis? 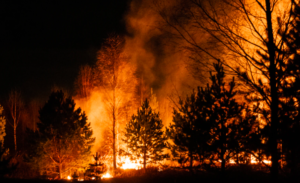 The United Nation’s body for assessing climate change science, the Intergovernmental Panel on Climate Change (IPCC), released a sobering report on Monday warning of the catastrophic consequences of insufficient action on climate change. Unless drastic measures are taken to reduce global greenhouse emissions within the next few years, current and future generations will be in store for more frequent and intense episodes of extreme weather, including heat waves, droughts and rising sea levels.

This comes in the wake of several extreme weather events that have occurred in recent weeks, including severe flooding in Germany, China and parts of the UK, wildfires in Greece, Algeria and Turkey, and the heatwave in Italy.

With the long-awaited United Nations Climate Change Conference (COP26) scheduled to go ahead in November, this report adds even more pressure on governments to commit to early and drastic intervention.

Governments all over the world have demonstrated a strong willingness to ‘listen to the science’ when it comes to the pandemic crisis. But are all crises created equal?

To put into perspective the current rate at which the climate is changing, the researchers compared temperature changes observed since records first began in 1850 with reconstructed records dating back to the year 1. This was possible thanks to paleoclimate archives, which are groups of geological and biological materials that help experts to understand how the climate has changed historically. The authors were also able to distinguish the rate of change driven by human factors.

It was found that the rate of change in the global surface temperature over the past five years is the highest that it has been since 1850, while the human-induced increases are the highest they have been in 2000 years.

Looking to the future, there is little reason to be optimistic. Simulations of future outcomes under 5 different scenarios of global greenhouse missions (very high, high, intermediate, low and very low) revealed that, no matter the scenario, it is expected that the global temperature will reach the globally agreed safe limit of 1.5°C by 2040 and will continue to increase until at least the mid-century.

Unfortunately, natural carbon sinks will become less effective as CO2 emissions continue to increase. There also seems to be no way to avoid the melting of all ice caps in the Arctic sea. It is likely that the Arctic will be “practically sea ice free in September at least once before 2050” under all scenarios.

The 1.5°C target reduces the intensity and frequency of extreme weather

A global warming target of 1.5°C above pre-industrial levels is often deemed as a ‘safe’ upper limit which countries should strive for. However, as the IPCC report lays bare, even under the scenario that we contain warming at this threshold, sea levels are still expected to rise by two to three metres, extreme temperature events that only occurred once every 50 years between 1850-1900 are likely to occur 8.6 times every decade and droughts are likely to occur twice every decade.

While certain countries have been more prone to extreme weather, no country will be spared from the consequences of global warming and almost all have already experienced an increase in extreme weather compared to 70 years ago. The only country in the world to have experienced a decrease in any of the three types of extreme weather events since the 1950s is Northern Australia, where studies have observed a decrease in agricultural and ecological droughts. Occurrences of hot extremes and heavy precipitation, however, have increased in North Australia.

Will we do enough about it?

According to the IPCC report, the role of human activity in global warming is said to be “unequivocal”. Meeting net zero targets and limiting cumulative CO2 emissions are a minimum.

Researchers also emphasised that to limit the warming effect of aerosol pollution and improve air quality, methane emissions need to also be drastically and rapidly reduced. By achieving low or very low greenhouse emissions, we could see discernable differences in the global surface temperature compared to high emission scenarios within just 20 years.

It is apparent that the short-termism plaguing government institutions around the world has increasingly driven us into a corner on climate change. Will this report push world leaders to treat the climate crisis with the level of urgency needed?

Given that the report is the outcome of a comprehensive review of 14,000 research studies, many of the findings will not come as a complete surprise. Although progress has been made, the level of commitment towards global climate targets falls far short of ambitions. With only 31% of value of the world’s stimulus measures considered to be beneficial to the environment, the crisis has in many ways scaled back progress.

A smaller cost than Covid-10

Taking into account the historic levels of funding that governments all over the world have dedicated to tackle the pandemic crisis, it appears as though the issue lies with  a lack of political will rather than a lack of resources. Recent analysis by the Office for Budget Responsibility has revealed that meeting the UK’s target of achieving net zero by 2050 will actually have a smaller effect on public finances than the government response to the coronavirus pandemic.

The cost of meeting this target through measures such as investing in green technologies and increasing carbon taxes over the next 30 years will be mostly offset by savings from more energy efficient buildings, leaving a net cost to the government of £469bn in present terms.

When spread over a 30 year period, this will add 21% of GDP to government debt each year until 2050, assuming that action is taken early starting from the mid-2020s. It is certainly a much better deal than adding 289% of GDP to debt by 2100, which would be the case if no interventions take place.

Of course, these figures do not reflect the funds needed to help towns and cities adapt to extreme weather events, which the IPCC has demonstrated is inevitable even under “safe” levels of global warming. Experts have warned that successful adaptation will require the redesign of the infrastructure, buildings and public areas.

The UK government has recently announced a £5.2 billion funding pot to help with building resilience against flooding. However, this is primarily aimed at protecting future developments, rather than existing ones. We cannot continue to miss the mark on green spending.

Photo by Egor Vikhrev on Unsplash